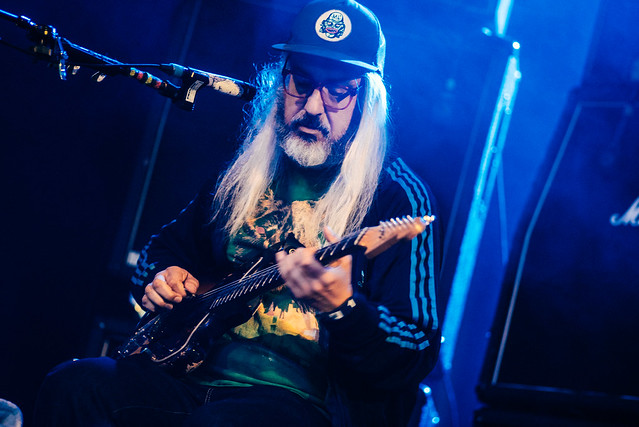 Dinosaur Jr. took the stage in front of a sold-out 9:30 Club on Thursday night. Two hours later, I sat in my car and could hardly hear anything over the ringing in my ears. This is not a bad thing (although I have rethought my stance on wearing ear-plugs) because it was a result of J Mascis’ roaring guitar solos!

J’s Jazzmaster screamed as Emmett Jefferson “Murph” Murphy III (drums) and Lou Barlow (bass) provided a heavy and steady rhythm foundation. I had read about J’s ability on the guitar and seeing it for myself backed up everything I read. It’s no surprise Rolling Stone ranked him 86th on their list of 100 greatest guitarists.

Dinosaur Jr. is on tour promoting their album Give a Glimpse of What Yer Not, which was released on August 5 through independent record label Jagjaguwar. This is the band’s 11th studio album and the fourth since their reunion in 2005.

Listen to Give a Glimpse of What Yer Not, and lead singles “Tiny” and “Going Down,” by Dinosaur Jr. on Bandcamp (and buy it there if you like it!):

Between 1988 and 1997, the band released four albums with various lineups after Lou — and eventually Murph — left the band. What I find most impressive is that not only did the original lineup get back together in 2005, but they have had notable success since then.

Four studio albums and numerous tours later requires significant commitment and their fans are sure glad they committed. So last Thursday’s show was simply further proof that Dinosaur Jr. did not get back together for one last hoorah. The crowd that packed the 9:30 Club to watch Dinosaur Jr. was an odd mix. There were slightly older folks and then the younger crowd. While this happens pretty frequently at concerts, it seemed as though this show had a mixture of fans from when the band first gained popularity in the ’80s and fans from when the band re-united in 2005.

Lou and Murph seem to be enjoying themselves as much as ever. J is not going to wow you with his on-stage theatrics. But what he lacks in visible energy, he makes up for with his guitar playing. There’s no doubt he is enjoying himself as well.

As I sat outside the club waiting for the doors to open, I witnessed J come out to the tour bus. It was clear he was looking for something, but I wasn’t sure what. He eventually went back to the trailer, pulled out a bike, and took off down the road. And he didn’t seem to have a care in the world.

All in all, I would recommend checking out these gentlemen. If Dinosaur Jr. happens to be coming through your town and if you enjoy loud rock music with sweet guitar solos, go check them out… regardless of how old you are. You’ll thank me — and more importantly you’ll thank J Mascis.