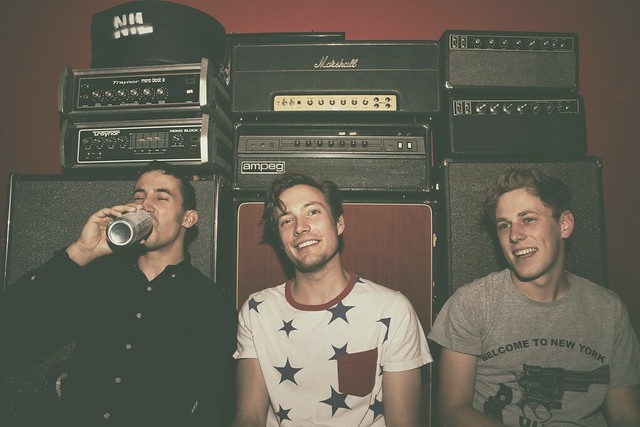 The Dirty Nil hit the Rock and Roll Hotel in support of headliner Billy Talent last Wednesday night. The performance was high-speed, high-energy, and high-volume!

The Dirty Nil hail from Ontario, Canada, and are made up of Luke Bentham (guitar, vocals), Kyle Fisher (drums), and Dave Nardi (bass). The group released their debut album via Dine Alone Records back in February — an album titled Higher Power.

[When you have singles like “Wrestle Yü to Husker Dü” or “Zombie Eyed,” you likely have a nicely cultivated punk rock sound. Check out music by The Dirty Nil on Soundcloud: — editor]

Probably my biggest takeaway Wednesday was that this band sounds like they should be playing shows in the late 70’s with the likes of Bad Brains and Dead Kennedys. It’s almost as if they began a few generations too late. Everything from their look to their sound made me feel like I was seeing a band from the ‘70s.

And The Dirty Nil have a great sound. It is not anything super unique or crazy — it’s just solid song-writing mixed with some energetic and powerful instrumentation. For some musicians, feedback from an amp is not a desirable sound. In fact, it’s probably the worst nightmare of many sound techs and band members alike. Not these guys! Luke’s guitar screeched with feedback at the end of songs as he would finish the last chords, and he seemed to relish every bit of it. Still, I was most impressed by the bass playing from Dave.

I may be biased because I am a bass player, but I think even someone who doesn’t play an instrument could recognize and appreciate what he was doing. His bass had a great sound, and it fit the music well. What really stood out to me, however, was the speed and precision with which he played. It’s not easy to keep up on bass when you’re playing high-speed, loud music and also playing the kind of basslines he was playing.

On top of that, he sang quite a bit, including some lead vocals. It takes a lot of skill to play bass like that and sing at the same time.

Another thing that stood out to me was how different all three of them looked while playing. For example, Kyle seemed very laidback, and Luke seemed to be just enjoying himself and rocking out. Dave had an intense look on his face and seemed to be focused. I actually met him after the show and he was the opposite of intense! He was very friendly and almost seemed kind of reserved. I asked him if he had anything he wanted to say for this blog, and he laughed and said he didn’t know.

All in all, it was a good performance. Since they were one of the opening bands, their set wasn’t that long. But then again, they don’t have a ton of songs yet. The Dirty Nil have a bright future: They are young, and they will continue to grow and progress. I certainly will keep an eye out for the next time they come through the DMV.

Side note: If you have never been to DC’s Rock and Roll Hotel, I would recommend checking it out. It is very intimate and has great acoustics. Parking is not great, but there is a valet option.