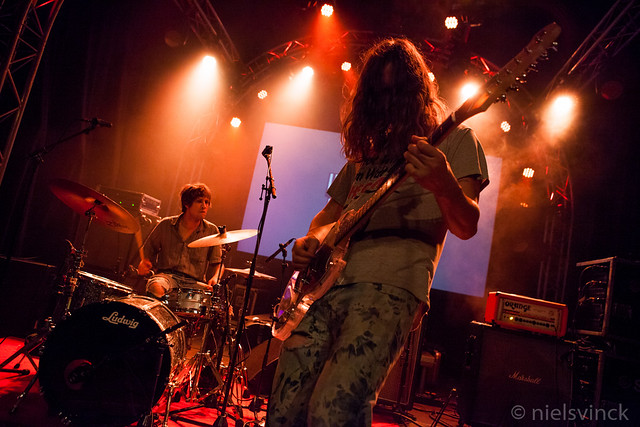 Let me begin by saying that if you want to get REALLY close to a band, check out the backstage section of the Black Cat in DC. That’s where I watched JEFF the Brotherhood last week. It was not a huge crowd, and normally I would describe it as “intimate”, except that I don’t think you can use that word in the same sentence as JEFF the Brotherhood. Any “intimacy” left the room when Jake Orrall struck that first chord on his guitar.

I was a little surprised to see only two people take the stage. I had read about and seen that brothers Jake and Jamin Orrall sometimes play with a bass player and a drummer, but it was just the two of them. But I assure you, there was no lack of sound coming from the two brothers. I still don’t know how Jake was able to get that kind of sound/tone from his guitar. My best guess is that he was using an Octave Pedal. Without getting too technical, an Octave Pedal would allow someone to play one note and get the same note in a higher or lower pitch at the same time.

The effect: Jake’s guitar was basically providing the bass as well as the guitar. Although being a bass player, I am partial to seeing an actual bassist, I think I can give Jake a pass because the sound he was getting from his guitar was bad ass.

The band mostly played from their new album Zone, which they made no attempt to hide. They actually joked about it throughout the show, making comments about the show being “Zone-heavy.” You can check out a couple of the songs they played below.

At one point before the start of a song, Jake said that they were being rushed out off the stage and that it was the last song. I still am not sure if that was a joke or if they just decided to keep playing anyway. If they had stopped at that point, they would’ve ended up playing about the same number of songs as the opening band. I can tell you, this review might sound quite a bit different if that had been the case.

Jake and Jamin were funny without trying too hard. I could tell by watching them that they really enjoy playing the music they have created. It wasn’t about the crowd; they didn’t try to get people to clap along or jump up and down. They just played, and the crowd rocked out.

All in all, it was a good show. The music is not for everyone, but I enjoyed it. It was cool to see these guys up close. I am not sure if it was the proximity to the “stage” or just their mannerisms and attitudes, or both, but JEFF the Brotherhood sounded to me like two guys having fun and expressing themselves through their music. After all, that’s really what music is about.