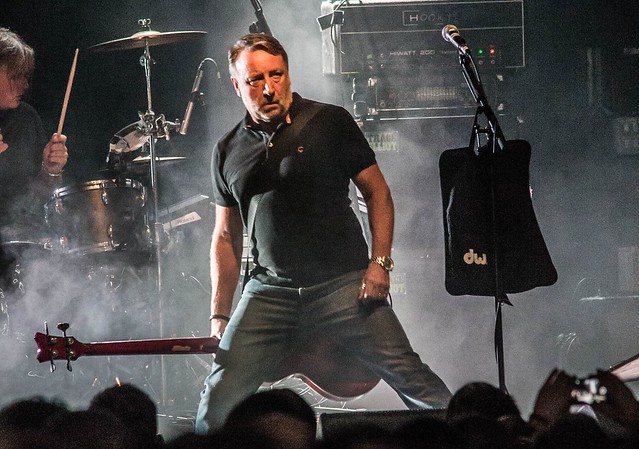 You know this man. You probably first met him in the opening chords of “Ceremony.” You definitely got to know him better in the resplendent bassline of “Blue Monday.” As an American, the Manc bassist had become one of your favorite Englishmen by the time you heard him play “Bizarre Love Triangle” or “True Faith.”

He’s Peter Hook, formerly of Joy Division and New Order, and he’s been on a quest to claim his legacy.

Hooky and his bandmates issued two retrospective packages, more than “greatest hits,” first for New Order in 1987 and then for its predecessor band Joy Division in 1988 — both called Substance. And since breaking up with his New Order mates, Hooky has been touring first the Joy Division and then the New Order catalog with a band called The Light, consisting of his son Jack Bates (bass) and former members of Hooky’s band Monaco — Paul Kehoe (drums), Andy Poole (keyboards), and David Potts (guitar).

Now Peter Hook and The Light have put it all together in a world tour, An Evening with Peter Hook and The Light, performing “Substance” — Joy Division and New Order. Hooky opens for himself with the Joy Division tunes and then follows with a main set of New Order tunes, all pulled from those Substance retrospectives. The show comes to the Howard Theatre in DC on Wednesday, Nov. 23.

Few performers marry grit to glitter as well as Hooky, who pours a growling rocker’s passion into his songs in concerts while strumming up some of the most beautifully abundant bass in the history of modern music. While Hooky’s rift with New Order is lamentable, the situation is not a case of either/or — rather, it’s a case of both. Trust me, you have to see Peter Hook and The Light live to truly appreciate the whole sound, and its history, of Joy Division and New Order.

I’ve seen Peter Hook and The Light twice myself at the 9:30 Club. Perhaps you were there? You especially don’t want to miss them this time. Tickets are available online.