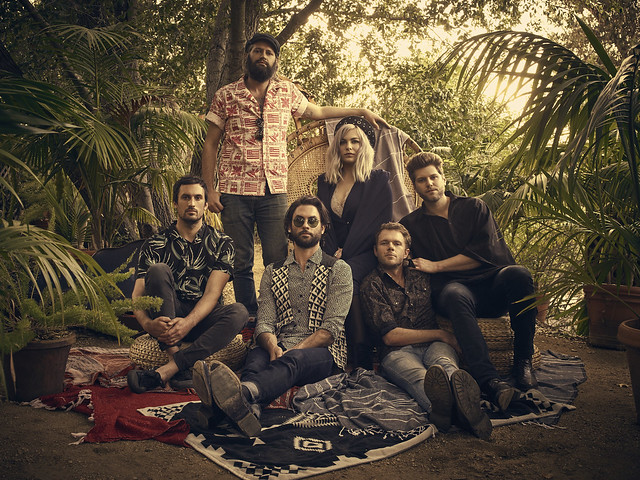 The Head and the Heart released their third album, Signs of Light, in September of this year, after leaving their original label (Sub Pop) and moving to Los Angeles (from Seattle). They started the show off sprightly enough with two of the stronger songs from the album, the single “All We Ever Knew” and “City of Angels”. The latter an effervescent song that set the tone for the night – upbeat and free, despite the fact that co-lead singer Josiah Johnson was missing and was missed.

The Head and the Heart first formed in 2009 in Seattle and has waved the indie folk/rock band flag as high as possible. The six members of the band are Josiah Johnson (vocals, guitar) – he is on hiatus, substituted by Matt Gervais for this tour, Jonathan Russell (vocals, guitar) – who took over all primary singing duties, Charity Rose Thielen (violin, banjo), Chris Zasche (bass) – channeling Mick Fleetwood’s look, Kenny Hensley (piano) and Tyler Williams (drums).

The large stage at DAR was filled, with the band, instruments, plants, assorted bric-a-brac and a large guitar corral, that rotated its wares frequently as songs drifted beat by beat into new harmonies and riffs.

Later came “10,000 Weight in Gold” from their second album, Let’s Be Still. Jonathan Russell’s mom had asked them to play this earnest piano-driven harmony, highlighted by Russel’s plaintive voice. Only a handful of songs from Let’s Be Still graced our ears, but among my favorites they gave us “Another Story” and during the encore they energized those standing (everyone) with “Shake”.

Their debut album received much of their attention on this night as well, with the sing-along, clap-worthy “Lost in My Mind” and the final ballad of the night, “Rivers and Roads”, which was probably a specific ode to their missing band member.

Even without Josiah Johnson, the band gracefully gave the fans a solid show, though the full spark exhibited during their DAR performance in 2014 presented itself tentatively. “Winter Song”, offered mid-way through the set, summed up Josiah’s absence best, “We don’t know how we feel, we’re just prayin’ that we’re doin’ this right, though that’s not the ways it seems.”

Thanks The Head and the Heart, we had a good time!

Setlist
All We Ever Knew
City of Angels
Ghosts
Rhythm & Blues
Another Story
Let’s Be Still
Your Mother’s Eyes
Take a Walk
Lost in My Mind
Winter Song
Oh My Dear
I Don’t Mind
10,000 Weight In Gold
Sounds Like Hallelujah
Down in the Valley