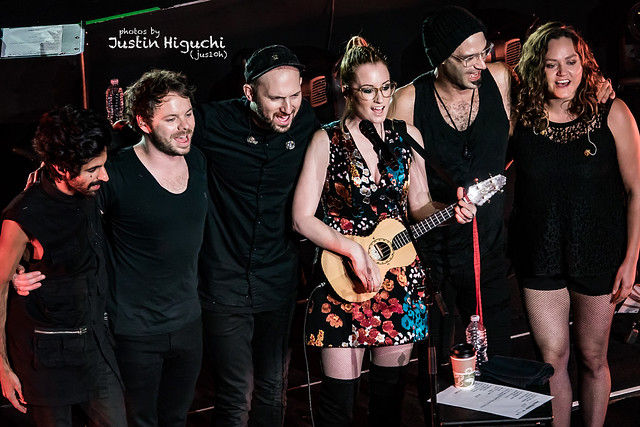 Or pausing the show so she and the five-member band could dress up in silly costumes and give the audience a chance at a ‘sexy’ photo op, suggesting she usually has a weird face while singing. The guys of the band later posed in a 4-man spoon, classic for being the something I’ve yet to see on stage. I assume they didn’t practice.

Ingrid and the band also wore matching black, leather jackets with the butterfly logo of the ‘Hell No Tour’. The tour is in support of her seventh album, It Doesn’t Have To Make Sense. An often apt description of the fun being had on stage.

There was music on offer…let me assure you! Ingrid sang 19 songs over the evening, including a couple covers like “Creep” by Radiohead, which she confided made her feel better and she was only playing it for herself.

Early on she played “Light Me Up” and “Another Life” from the new album, before skipping to the end of the main set to play more new songs like “Celebrate” and “Hell No”, a shout to the sky anthem about not taking someone back after a breakup.

She focused most of her time on fan favorites like “Maybe” (noting casually this song is 100 years old, like her) and “Be OK”.

She played a series of songs acoustically with a ukulele while the band sat out, like “The Way I Am”, a quiet love letter about acceptance.

Later, with the band back in fine form, the brothers from AJR, who opened, joined Ingrid on stage to perform “The Lotto”, a spritely song they had written together and only play during the live shows.

Apparently growing weary of the literary stage backdrop, the set transformed to a giant ‘IM’ logo and the energy ratcheted a few notches higher for “Warpath” and “Afterlife”, probably the best song of the evening, if judged by the audience and their desire to sing all the words. And by me.

For the encore she played the ever energetic “Girls Chase Boys” before cementing the tone of the evening with a cover of Right Said Fred’s “I’m Too Sexy”, with a choreographed dance number!

An entertaining evening to be sure, and a show you should catch when the chance presents itself. She knows how to play to the crowd, and be appreciative of fan loyalty. And don’t forget the humor. Or the music.