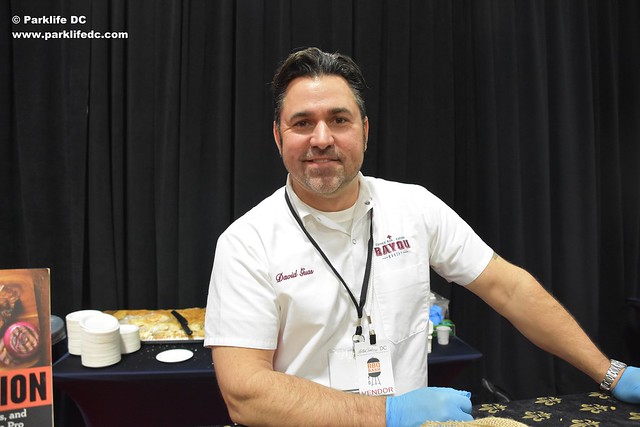 David Guas, chef and owner of Bayou Bakery, at the BBQ Bash of MetroCooking DC on Dec. 3, 2016. (Photo by Mickey McCarter)

MetroCooking DC arrived at the Washington Convention Center for its annual show last weekend, smoking up its specialty food pavilion with some outstanding BBQ on its first day.

David Guas, chef and owner of Bayou Bakery, headlined the BBQ Bash, providing a cooking demonstration and displaying his own bakery’s buttermilk biscuits with a pork BBQ. We do recommend checking out those fantastic biscuits for yourself at Bayou Bakery’s Capitol Hill location on the grounds of Hill Center at the Old Naval Hospital (901 Pennsylvania Ave. SE, DC). Visit http://www.bayoubakerydc.com for details. 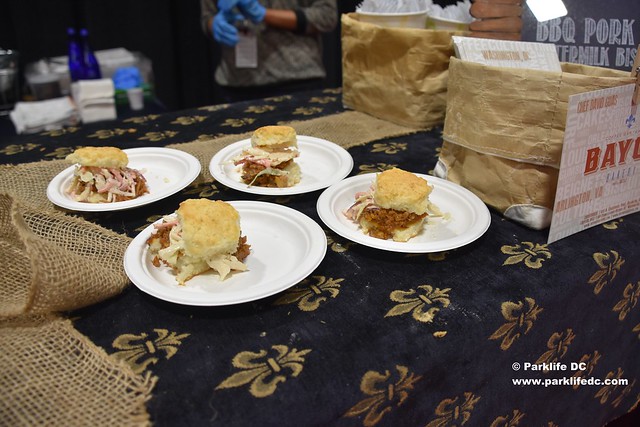 Around the midpoint of the event, David took to a spacious stage riser for his cooking demo. The BBQ Bash overall proved to be a popular draw, and hungry customers flocked to the demo and around the booths. Later, David signed copies of his book, Grill Nation, which he wrote in his capacity as host of the Travel Channel’s “American Grilled.” The book explores tips for backyard BBQ including pit techniques and recipes for smoking, grilling, and barbecuing.

I was pleased to see Logan McGear, executive chef and pitmaster for Smoke & Barrel (2471 18th St. NW, DC) in Adams Morgan representing his terrific establishment. For the past several years, Smoke & Barrel has been a go-to destination for me when I’m in the mood for BBQ and beer, particularly during their great Wednesday happy hour when all taps are half price. 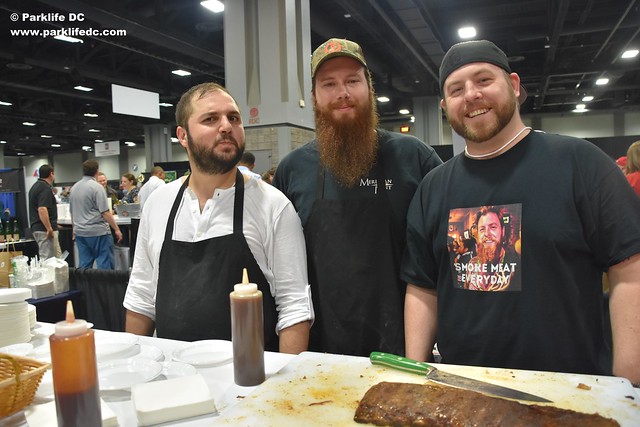 Logan and company were serving up three very good dishes at the BBQ Bash — ribs, pork BBQ, and beef brisket. All three were home runs in my opinion. I’m sucker for the ribs in particular, so go to Smoke & Barrel with an appetite. Check it out yourself at http://smokeandbarreldc.com.

A surprise discovery for me at the BBQ Bash was Hog-It-Up BBQ, which presented a Beef Tri-Tip. This delectable slider was made in Korean style, yet smoked with mesquite on potato slider buns and topped with Elijah Craig Bourbon Onion Jam and a savory black pepper sauce with Tennessee dill whiskey pickles.

Hog-It-Up BBQ turned out scores of its sliders, which were gobbled up as quickly as they appeared. The BBQ team, based in Bluemont, Virginia, has won quite a few accolades, and they are available for catering. Look them up at http://www.hogitup.com. 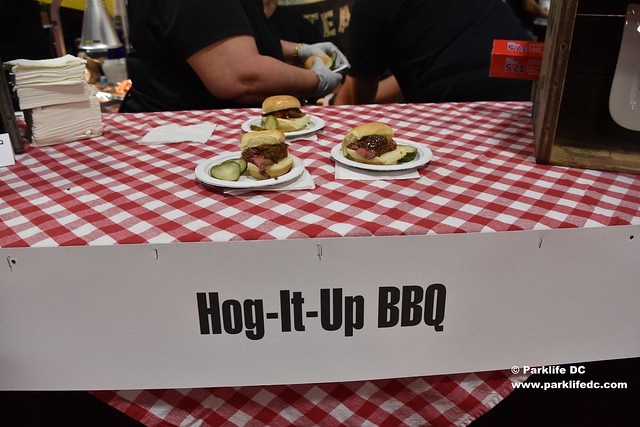 One of the other pleasant surprises about the BBQ Bash pavilion was that several vendors were dedicated to enhancing BBQ rather than dealing with the main event. Take for example RelishThis, an artisan provider of zucchini relish perfectly fit to adorn any BBQ. 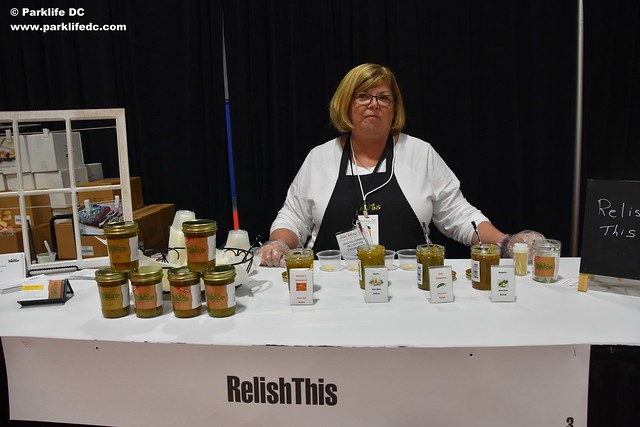 Joylin Conklin of RelishThis displayed several flavors of her tasty zucchini relish, including a very agreeable garlic. She also had some handy recipes on how to dress up your meat of choice. A winning recipe for meatball sliders involved sausage, beef, and a half jar of zucchini relish.

RelishThis also has some great recipes on their website. Find out more about RelishThis at http://relishthispa.com. 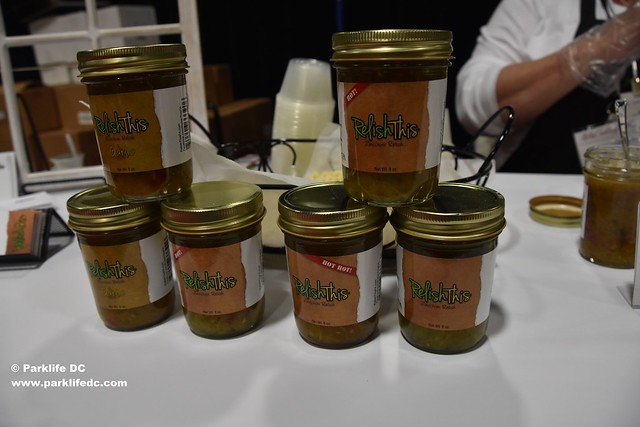 Oh, I would be remiss not to mention that the BBQ Bash was my first opportunity to also sample heavyweight BBQ chain Oklahoma Joe’s, which sponsored the BBQ Bash this year. The famous franchise opened a location near the Dunn Loring-Merrifield Metro Station (2670 Avenir Pl. O, Vienna, Va.) only this year. Its selections at BBQ Bash included BBQ pork, beef brisket, and burnt ends, a traditional Kansas City BBQ offering. Oklahoma Joe’s offered up this robust sampling of its menu with sides like its chicken chili and some veggies.

Needless to say, it was quite a popular draw! I plan to make a proper visit to the restaurant myself next time I’m in Virginia, and you can plan ahead by consulting the Oklahoma Joe’s website at http://okjoes.com. 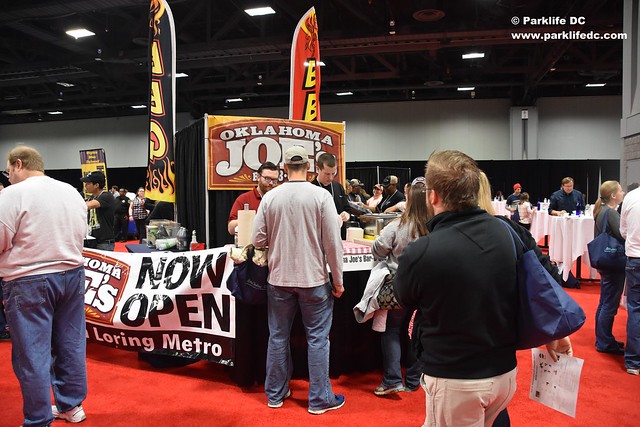 All in all, the BBQ Bash at MetroCooking DC was a destination worth visiting this year. We look forward to seeing what MetroCooking DC comes up with next year when it will undoubtedly return to the Washington Convention Center in the fourth quarter. Keep your appetite ready and keep an eye open at http://www.metrocookingdc.com for their future plans.