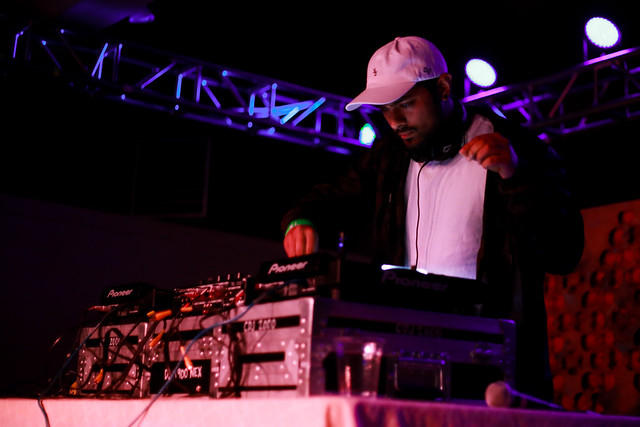 Jai Wolf made a stop at the 9:30 Club on Thursday night as part of the Kindred Spirits tour. The show started late (he got on around 11:30pm), but the time of the show did not deter fans from filling up the club.

The mastermind behind the EDM project Jai Wolf is Sajeeb Saha, who hails from Bangladesh. He recently released his debut EP, “Kindred Spirits,” which features six tracks, including his most popular song “Indian Summer,” which you can hear on YouTube.

“Indian Summer” has sold over 70,000 singles and reached #1 on Spotify’s US Viral Chart. It seems that Sajeeb is only beginning to reach the potential for success.

His performance was high energy and fun. It gave the full experience of visual and audible stimulation. Sajeeb was set up on an elevated stand in the middle of the stage with a circular-type railing. Behind him was a screen that, while it had been used by the opening acts to display their names, was clearly set up for Sajeeb’s show. It wasn’t anything mind-blowing, but it was nice calm visuals that went along with the music well.

The crowd danced along (mostly) all night long. What I really enjoy about the music of Jai Wolf is that it is a mix of upbeat songs to groove and dance too, but there are some more somber, melodic ones too. For instance, before he played the song “Gravity,” Sajeeb said it is his favorite off his new album. This song is really good song but is not the most dance-inducing track you will hear from Sajeeb. The fact that this is his favorite song from the album speaks to his musical diversity. It makes him more of an artist as opposed to a DJ that remixes tracks and plays them for a crowd while jumping around (not that there’s anything wrong with that…).

You can check out “Gravity” by Jai Wolf on YouTube:

Overall, this was a cool show. The audience enjoyed it, and Sajeeb really seemed passionate about his music. He was singing along, albeit without a mic, to all of the songs. Confetti shot out a few times throughout the evening, which is always a crowdpleaser. I noticed that most of the audience was there to dance, and not so much to observe what he was actually doing on stage.

All in all, I’d say most everyone went home happy. Check out my personal favorite Jai Wolf song on your way out. You can listen to more of his music at his website, and even pick up a vinyl of “Kindred Spirits” at http://www.jaiwolf.com.