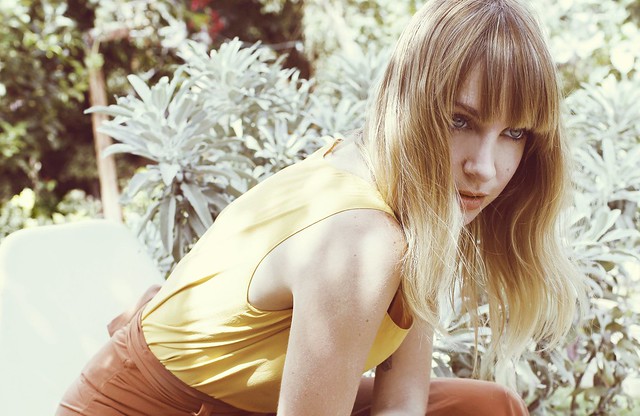 Laura described the sensation of her break in a statement, saying, “I was convinced I was going to die. For the first time in my life, I couldn’t see anything in front of me. When I closed my eyes and tried to imagine my future, I saw a yawning black void. No music. No touring. Nothing.

“But instead of feeling bleak about it, I was surprisingly comforted and full of gratitude for everything I’ve gotten to do and see and experience in my life,” she said. “Maybe it was Oliver Sacks’ Gratitude I’d just read (the collection of essays he wrote knowing full well he’d soon die of terminal cancer), or the Zen Buddhism I’ve been easing into over the past years, but I felt seared awake to my own mortality and strangely calm about it.”

The idea that she “had no idea what she was doing” actually gave her solace, and she sat down to write a few songs, yielding a new track “Apples & Oranges” last October via Saddle Creek.

Listen to the audio of “Apples & Oranges” by Laura Burhenn on YouTube:

It’s interesting that Laura decided to record under her own name rather than The Mynabirds, as that Los Angeles-based project is truly Laura working with some friends and contributors. But maybe being truly solo was what her process was all about.

Of the new song, Laura said, “It’s very much a meditation on being human, on the fact that we’re all born, and we all die. We’re going to get some things right, and a lot wrong, but in the end all that matters is that we get to connect for a little breath of time. It’s no big deal — all the empires that rise and fall every day; and it turns out all the littlest things matter most.”

Read our Parklife DC interview with Laura Burhenn from 2015! Den-Mate opens for Laura at Songbyrd Music House on Wednesday. Tickets are available online.