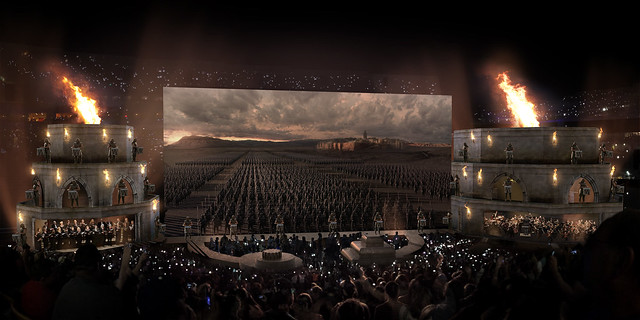 The choice is yours when you go to see the Game of Thrones Live Concert Experience with Ramin Djawadi, the composer of the show. The massive tour, a technical marvel, begins on Feb. 15 and comes to the Verizon Center in DC on Wednesday, March 1, during its 28-city voyage.

Promoters vowed to “bring the Seven Kingdoms to life on a scale never seen before” as Ramin works with a full orchestra and choir to travel across the realm of Games of Thrones through music. The iconic Game of Thrones music will transport concert attendees “from King’s Landing to Winterfell, along the northern stretches of the Kingsroad to The Wall and across the Narrow Sea to Braavos, Meereen and beyond,” said the show’s organizers.

The musical tour of the world of Game of Thrones will use cutting edge production techniques and video technology to recreate lands throughout Westeros and Essos. It will present footage from the show as well as exclusive content created specifically for the tour.

Watch a trailer for the “Game of Thrones Live Concert Experience” with an epic number of statistics that paint a picture of how immersive this show is:

“For the past six seasons of Game of Thrones, I have been tremendously inspired to compose music to David Benioff’s and D.B. Weiss’ extraordinary adaption of George R.R. Martin’s epic ‘A Song of Fire and Ice’ series,” said Ramin Djawadi in a statement. “Now, by combining the music with state-of-the-art technology, we are going to bring the astonishing world of Westeros to fans in a live and unique concert experience.”

Ramin previously composed music for the Marvel Studios blockbuster Iron Man, in addition to Pacific Rim, Clash of the Titans, and Warcraft. He received an Emmy Award nomination for his work on Game of Thrones as well as for other television scores, such as Flash Forward (ABC) and Prison Break (FOX). He most recently composed the music for HBO’s Westworld.

Live Nation is producing the tour in partnership with HBO Global Licensing.

So again — House of Lannister? Or House of Stark? Tickets are available online. 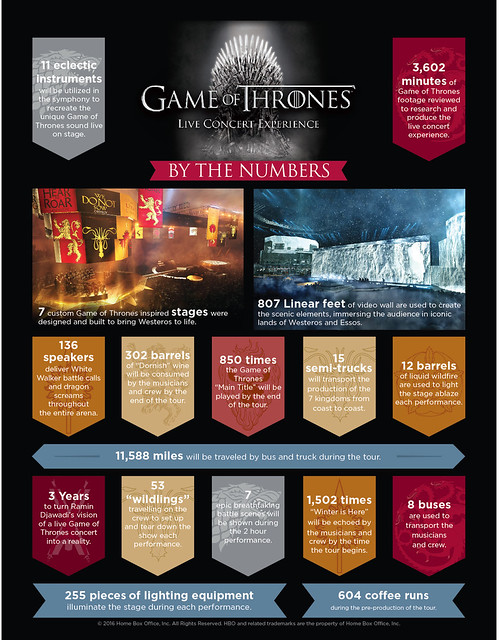