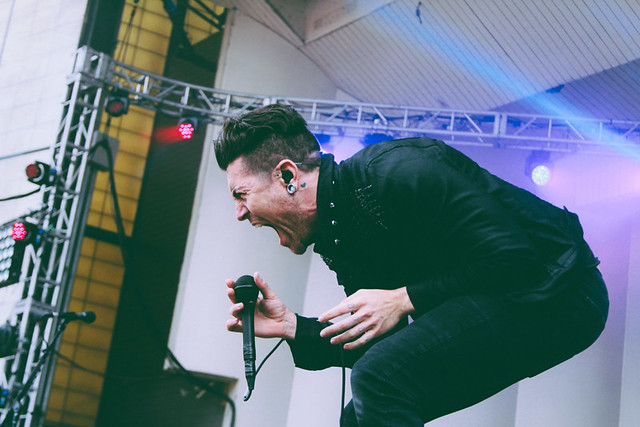 With a crowd thrusting their fists in the air, Davey Havok led a chant every young AFI fan of the past 20 years wanted to hear: “Through our bleeding, we are one.”

AFI played at 9:30 Club on Tuesday, Feb. 7, as a stop on their “Blood Tour” with indie openers, Souvenir and Nothing. Although the tour being named after their most recent album, AFI/The Blood Album, AFI kicked the show off with an 18-year-old intro song.

AFI recently released an official music video for the song “Aurelia” from The Blood Album. Watch it on YouTube:

The setlist was a pretty even mix of new hits and older classics, including a song that the band has not played live, “Of Greetings and Goodbyes,” from the 17-year-old album “The Art of Drowning.” AFI played all of their major hits spanning their last seven albums, omitting “Crash Love,” but including “The Leaving Song pt.2,” “17 Crimes,” “Girls not Grey,” “Silver and Cold,” Miss Murder,” and “The Days of the Phoenix.”

As a band who is pushing 20 years playing together (formed in ’91 but same lineup since ’98), they play with the same energy and vigor as when they just started. Davey Havok still hits his high notes, and Jade Puget and Hunter Burgan are still flinging about on stage. During the song “I Hope You Suffer,” Davey stepped into the crowd for his signature skull walking as an eerie video is projected on their backdrop.

Being a quartet with only one guitarist, AFI is able to fill the stage in presence and with resounding music that captivates everyone in the room. They have perfected the art of showmanship while simultaneously perfectly playing through their intricate repertoire.

It had been about 10 years since I have last seen AFI play, and I hope that it will not be 10 years before I see them again. The show 10 years ago was sold out, and the show on Tuesday was sold out as well. By that measure at least, it is obvious that they have been a consistently great band.