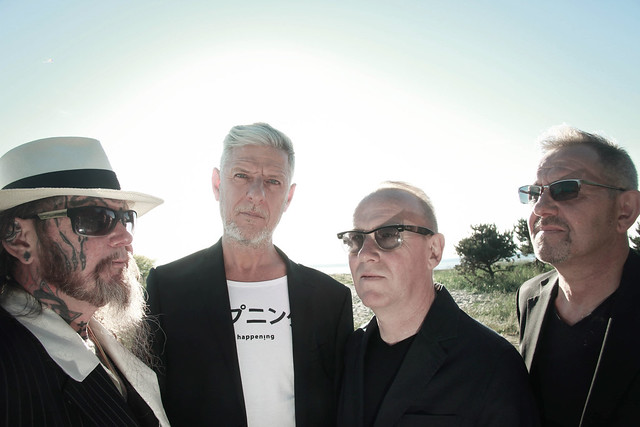 March 28 Update: Modern English have canceled this show due to the sudden hospitalization of their guitarist Gary McDowell.

From the band: “All of us, Gary especially, are very sorry to have to announce the sudden cancellation of our Take Me To The Trees US and Canadian dates. This is due to a serious illness and urgent surgery required for our guitarist Gary. Obviously we are very upset and disappointed to have to come to this decision, but without Gary we can’t play any concerts. After recovering from surgery, Gary will be flown home to England for further treatment.”

Legendary post-punk rockers Modern English are set to release their first album by original members of the band in 30 years. The band successfully funded the album via PledgeMusic.

The PledgeMusic campaign for the new album, Take Me to the Trees, is still active for another 10 days, and not quite at 100 percent, so go support it! The album is officially available on Friday, Feb. 24.

Meanwhile, Modern English have announced a tour to celebrate the new material. The tour will take them to SXSW for the first time ever, and afterward to Rock and Roll Hotel here in DC for a show on Monday, April 10. (Note there is a fun PledgeMusic incentive where for $150, you can introduce Modern English at your local show, as well as a $300 incentive where you can be “roadie for a day.”)

For the tour, vocalist Robbie Grey confirms the band will play music from across their career, including well regarded albums Mesh & Lace, After the Snow, Ricochet Days, and Stop Start as well as new album Take Me to the Trees.

Watch the official music video for “Melt with You” by Modern English on YouTube:

The April 10 showtime will be the first time Modern English have been in DC in quite a while. They reconnected with many of their American admirers on a Mesh & Lace tour in 2016, but they didn’t get closer to DC than Baltimore, where they played at Ottobar nearly a year ago. (Read our Parklife DC review of Modern English at Ottobar.)

Of the Modern English show last year, I wrote, “And the performance proves that the band were well head of their time 35 years ago. If anything, the band have grown into their deeply affecting songs, which are about self-assessment, placement, individualism, and questioning societal expectations.”