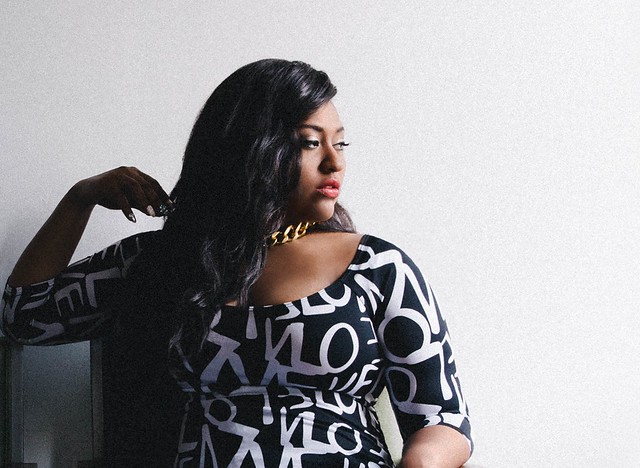 The seductive power of Teddy Pendergrass. The gospel grit of Patti Labelle. The vocal command of Jill Scott. These Philadelphia R&B influences form the soulful foundation of Jazmine Sullivan. The nine-time Grammy-nominated artist graced The Fillmore Silver Spring with the tone of less is more, demonstrating the power, range, and agility of her voice last Tuesday.

The sold-out Valentine’s Day setting was packed with enamored couples and composed R&B traditionalists who love to hear big voices with even bigger melodies — in addition to the millennial squad who grabbed their cell phones to scream her name. Donned in a black trench coat and shimmery black bodysuit, the almost 30-year-old Jazmine expressed a sense of command as she started the show with two cuts — “Foolish Heart” and the revenge-wrapped 2008 hit “Bust Your Windows” — that cued the audience to become background singers in the name of heartbreak.

While it may not have been her intention, Jazmine won the crowd over by acting as a best friend, supporter, and peer if you will. Before she transitioned to “Lions, Tigers, and Bears,” Jazmine shared her own struggles with confidence and motivation in the musical industry to educate fans about the pitfalls of self-doubt and naysayers. The pep talk served as a refreshing and humble reminder for artists to engage her audience beyond the scope of social media. The bluesy performance of “Lions, Tigers, and Bears” allowed Jazmine to slow the tempo and showcase her renowned ad-libs and melisma that many fans artists alike (such as Brandy) attempt to replicate on social media.

Watch the official music video for “Lions, Tigers, and Bears” by Jazmine Sullivan on YouTube:

Jazmine gave doses of hip-hop swag and energy mid-show when she performed her Missy Elliott-produced “Holdin’ You Down (Circles),” which was then remixed to a cover of the Fugees’ “Killing Me Softly.” Fans had the chance to sing Lauryn Hill’s bridge a capella as Jazmine switched the mic between herself and the audience. Love was indeed in the air as Jazmine began to channel her inner siren with a performance of “Let It Burn,” which sonically is an ode to Zapp & Roger’s style of downright sexual R&B. Staying true to the Valentine’s theme, the second cover of the evening featured Jazmine and her four-piece band take on Prince’s “Adore.”

The additional theme of self-worth was also present in an additional pep talk before the performance of “Masterpiece,” a song about growth from a damaging relationship. Yes, her set may have lacked extended choreography and dance numbers, but the crowd had the chance to understand how Jazmine merges her artistry with the moral health of her fanbase. The remixed performance 2015’s “Hood Love” received the reggae treatment from the band, followed by an impromptu showcase from one of Jazmine’s background singers. “Brand New,” another single from the 2015 album Reality Show, encouraged us to not tolerate any lack of loyalty in relationships. To engage both new and old fans, Jazmine revisited earlier material with the 2008 single “Need U Bad,” another mid-tempo ballad that seems to her specialty.

The final performance of the evening was “In Love with Another Man,” which hints to infidelity (despite the Valentine’s Day theme). Jazmine’s extended ad-libs toward the end of the song showed her mastery of jazz-inspired scat and chilling but beautiful lower notes. It is unknown if Jazmine plans to release new material this year, but based on the vocal stylings and band, Jazmine may find fortune and continued critical acclaim with her jazz-informed productions.