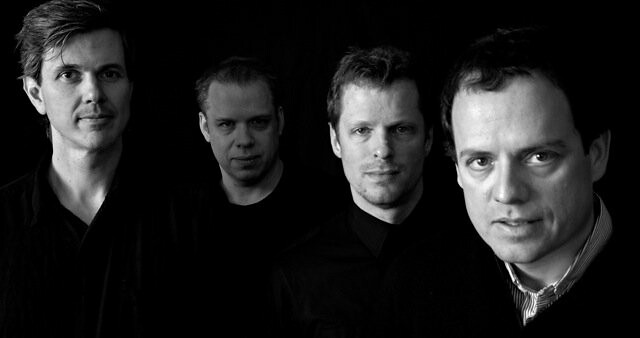 Terry Banks (guitar, vocals), Steve Hansgen (lead guitar), Hunter Bennett (bass), and Danny Ingram (drums) appeared on DC stages starting in 2010. Terry and Hunter started the band after the dissolution of Julie Ocean, recruiting Danny, formerly of Youth Brigade and Swervedriver, and then Steve, one-time member of Minor Threat. Taking their name from a song by Wire, the band released five albums in five years from 2011-2016.

The EP available from Last Day Deaf collects one B-side from each of those five albums. Download it at Soundcloud:

Dot Dash diversified their sound a bit on their most recent studio album. Assessing the album, 50 Third and Third said, “Dot Dash’s latest record, Searchlights (their fifth, all on Ottawa’s The Beautiful Music) pumps out 15 catchy, guitar driven tunes wrapped in a huge aircraft hangar production by Missy Thangs (Ex Hex). Their sound is timeless — drenched in the power pop sound of bands like The Plimsouls or Teenage Fanclub with the looseness of The Replacements.”

Dot Dash are next scheduled to play the first day of Breakin’ Even Fest at Songbyrd Music House on Friday, May 5.