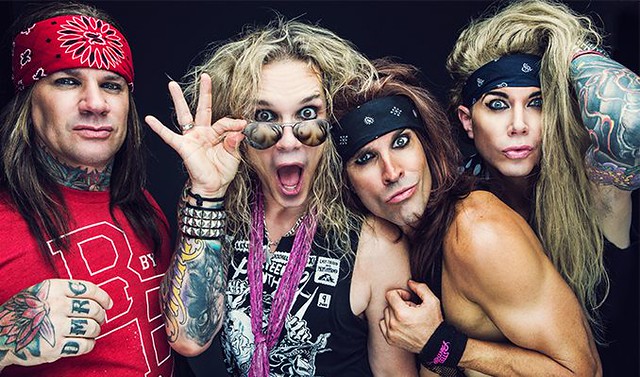 Steel Panther launch a tour today in their hometown of Los Angeles, leading up to the release of their fourth studio album, Lower the Bar, on March 24 via Steel Panther Inc. The humorous glam metal quartet will play somewhat locally at The National in Richmond, Virginia, on Monday, April 17.

“A cross between Weird Al Yankovic, Adam Sandler, and the mock-rock trio Spinal Tap, Steel Panther has been parodying and satirizing the 1980s for a decade and a half,” said Jessie Schiewe in SF Weekly. You may like them for another reason, however: They play undeniably catchy glam paired with their hair metal antics.

On the new album, Steel Panther make a rather raunchy spoof of “She’s Tight” by Cheap Trick, which seems wholly appropriate. The video even follows in the footsteps of Cheap Trick’s video.

Michael Starr (lead singer), Satchel (guitarist), Lexxi Foxx (bass), and Stix Zadinia (drums) have been going strong since their debut album Hole Patrol in 2003. They put a lot of thought into their new album, Lower the Bar, as evidenced a discussion in their press biography.

“Satchel suggested that I should lower the bar if I wanted to get laid more often,” said Michael. Lexxi disagreed, thinking Lower the Bar was so short people could also drink at bars. And Steel Panther hands it to them, alcoholic midgets, because they can’t reach over the counter. “It has so many meanings,” the band admitted.