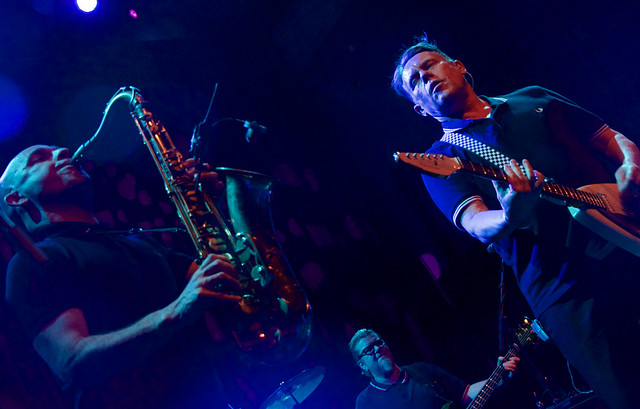 Dave Wakeling arrived in DC Wednesday in good spirits. With a mischievous grin and a boisterous attitude, Dave and his band in The English Beat appeared at 9:30 Club to enthrall a very full house with Dave’s time-tested ska, reggae, and new wave hits, which had the whole room skanking.

The English Beat opened the show with a couple of covers that they have come to own entirely in performance — “Rough Rider” originally by Prince Buster and “The Tears of a Clown” originally by Smokey Robinson and The Miracles.

As the show progresses, The English Beat keep delivering crowd pleaser after crowd pleaser. Make no mistake: DC loves Dave Wakeling, and he loves us back. He thunders through every song with gusto, playing his trademark Vox Teardrop guitar. The English Beat show did not have an opener, and it did not require one. The band performed for a solid one hour, forty-five minutes, and very nearly sold out 9:30 Club. (I suspect the only reason they did not was because another ska show was across the neighborhood at Black Cat.) Spirits were high on stage and on the dancefloor.

The English Beat move through some favorites like “Twist & Crawl,” the two-tone tune that famed critic Robert Christgau called one of his personal top 10 favorite songs of the ’80s, and “I’ll Take You There,” the 1994 arrangement of The Staple Singers’ staple by General Public, Dave’s “’90s band.” 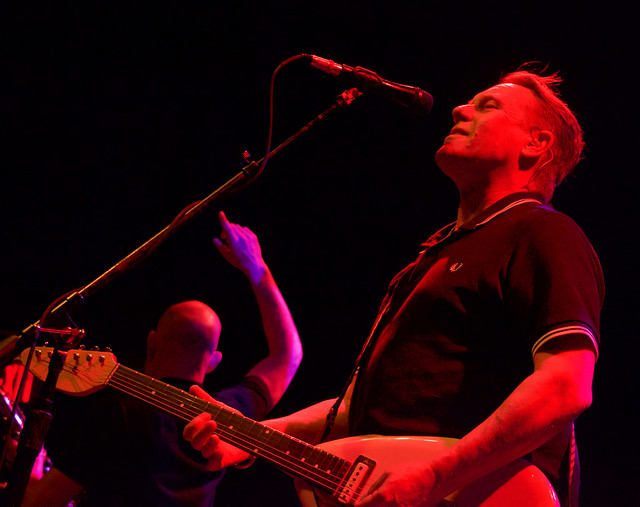 A personal favorite “Save It for Later” comes up next, but I want to talk about “Said We Would Never Die,” a new song that follows. You see, The English Beat will release a new album, Here We Go Love, a record of 13 original songs, sometime this summer, and presumably “Said We Will Never Die” (a working title perhaps) will appear on the album. It’s a moving torch song that allows Dave to take it down a notch while he strums along with a hushed voice. It picks up steam nicely in the middle, but it’s still a welcome respite in the frenetic pack of traditional English Beat hits. It’s a very pleasant song, itself honed through several years of being performed live.

The entire band is very good, but here it is appropriate to salute saxophonist Matt Morrish who shines on the new number as well as on many of the traditional English beats. Matt easily goes from being laidback and smooth to blowing his horn dynamically, hitting all of the right notes in energetic songs like the aforementioned “Save It for Later.”

After another stretch of terrific music, including a visit to “Tenderness” (another hit by General Public), The English Beat reach a second new song in the set, “The Love You Give Lasts Forever.” Dave also has been sharpening this song on the road, and it sounds quite a lot more like a traditional pop song by The English Beat. It’s a sunny, jaunty number that gets everyone swaying or jumping in place. Surely, this one will make the new album!

The show does not relent as it enters the final stretch with a one-two punch of “Ranking Full Stop” and “Mirror in the Bathroom,” which come out almost as one tremendous ska song. As always, the songs come to life thanks in part to top toaster King Schascha, who has an easy chemistry with Dave and indeed the entire band. King Schascha is a natural on stage, and his friendly presence and fast-talking mouth never fail to beguile the audience. At the end of the show, he hops down into the pit to shake hands with the entire front row, proving himself a gregarious chap. If Dave Wakeling is the king of ska, as the toast goes, then King Schascha is surely the minister of toasting.

On Wednesday, March 8, Dave Wakeling and company resume their tour in Florida, where they will perform a few shows and then embark as musical guests on Flogging Molly’s Salty Dog Cruise. The English Beat spend the rest of March playing dates in the Midwest, and then this summer they join the Retro Futura Tour, a traveling ’80s festival that may be coming to a city near you. (The English Beat appear with Howard Jones, Men Without Hats, Modern English, Paul Young, and Katrina [formerly she with The Waves].) Consult the Retro Futura website at http://www.retrofuturatour.com to see The English Beat on the tour!

Check back at Parklife DC tomorrow for our exclusive interview with Dave Wakeling, the man himself!

Here are a few more pictures of The English Beat performing at 9:30 Club on Wednesday, March 1, 2017. (All photos courtesy Ben Eisendrath /Instagram+Twitter: GrillworksBen.) 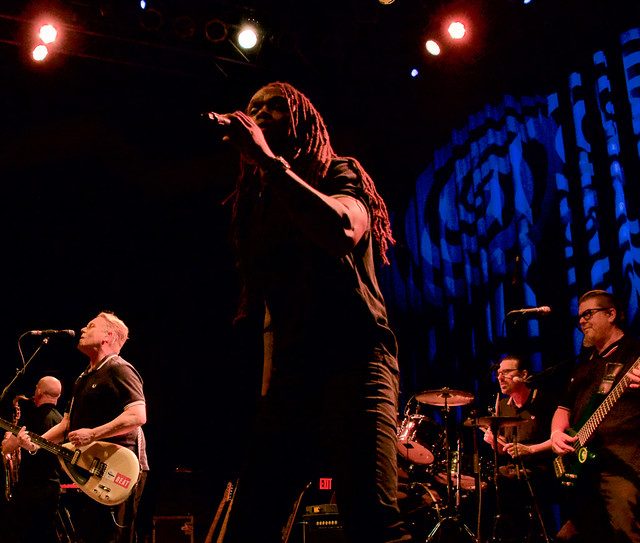 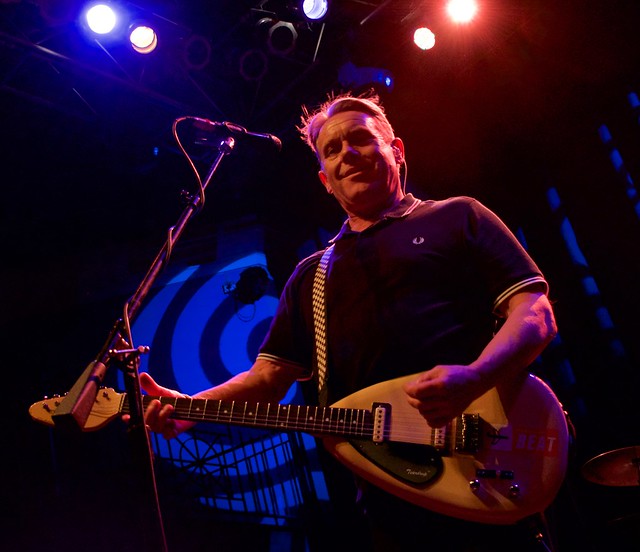 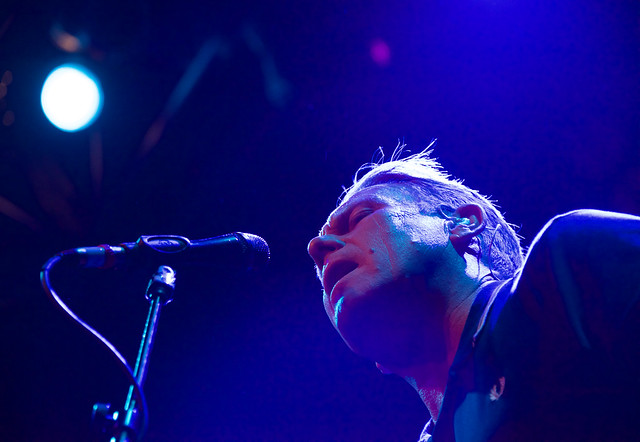 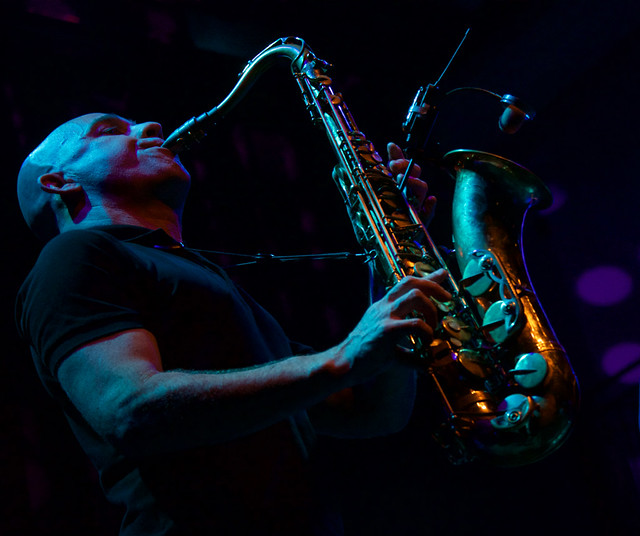 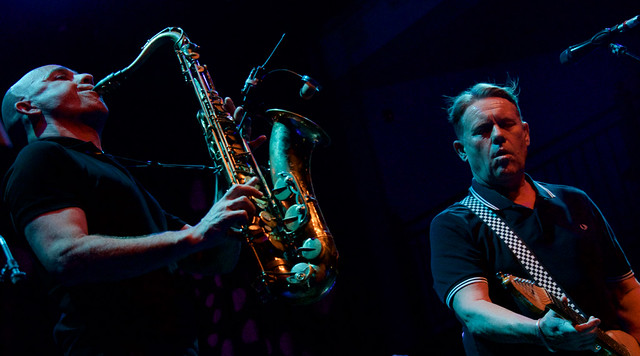