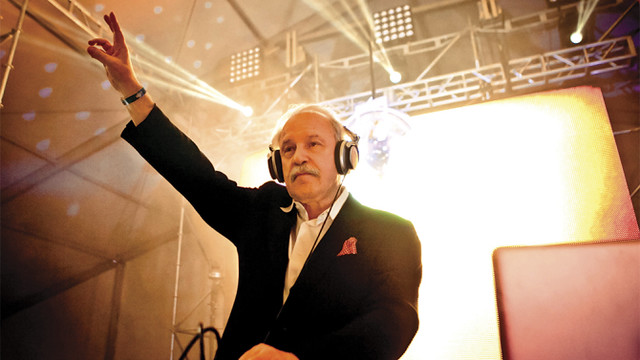 The legendary DJ resurfaced in pop culture for many when Daft Punk enlisted him to share a version of his life story over the dance beats of “Giorgio by Moroder” on Random Access Memories in 2013. Giorgio released his own album of original material, Deja Vu, soon after in 2015 — his 14th studio album and his first after 23 years (although he was still active as a producer and collaborator). He may be developing a new album, as late last year he released a single, “Good for Me,” featuring Karen Harding.

Watch the official music video for “Good for Me” by Giorgio Moroder featuring Karen Harding on YouTube:

Giorgio first made waves with “Looky Looky” in 1969. By 1977, he was already breaking through boundaries when he collaborated with Donna Summer on “I Feel Love.” In addition to more hits with Donna, Giorgio wrote and produced “Call Me” for Blondie and the movie American Gigolo, “Rush Rush” for Debbie Harry for the Scarface soundtrack (which he also scored), “Take My Breath Away” for Berlin and the Top Gun soundtrack (which he also scored with his protégé Harold Faltermeyer). Along the way, Giorgio worked with Phil Oakey of the Human League to create a very good album and the hit “Together in Electric Dreams.”

Now 76, the Italian synthesizer maestro is still gigging. Go see him in a rare DC appearance!