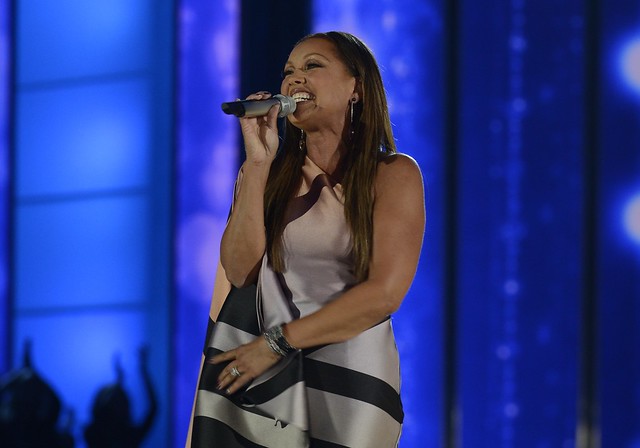 Poise. Personality. Preservation. Vanessa Williams showed the Howard Theatre how the three principles continue guide her career into the right direction because simply put, Vanessa has “The Right Stuff.”

Taking a note from her pageant days, Vanessa graced the stage with a signature smile, a few waves and regal restraint on Friday. Fans froze with childlike glee to gaze into her azure eyes before she launched into her 1991 hit “Comfort Zone” from the Grammy-nominated album of the same name. Vanessa’s late concert had something to offer everyone, as demonstrated by a performance of her 1988 single “The Right Stuff,” remixed with a lively swing band instrument. Rest assured, however, that Vanessa remained in the spotlight and at the center of the stage.

Although extensive choreography is no longer apart of “The Right Stuff,” her fans enjoyed her ability to breathe new life into the single. As a nod to her skills as a theatre-educated, Broadway-trained singer, Vanessa understands the value of versatility. The audience cheered in adornment when she scatted during the performance of her 1988 single “Dreamin’.” In a grateful moment, Vanessa told the audience that her band members have been with her ever since 1997. The audience clearly valued both authenticity and skill, which were amply expressed throughout the evening.

The entrée of her performance reintroduced fans to her to Adult Contemporary portfolio. The first duet of the evening featured her pianist, who filled in for Brian McKnight during the performance of the 1993 single “Love Is.” Vanessa expressed her gratitude and work ethic to mention that “Love Is” was featured on the soundtrack of the blockbuster TV show Beverly Hills 90210. Fans appreciated how the composed Vanessa harmonized with her voice and her hands during the song.

Vanessa further connected with the audience when she reflected on lessons learned from her former status as 1983 Miss America and initially being told by Disney agents that she was not “good enough.” With another around of eye contact and attitude, Vanessa captured her moment of redemption with a performance of the 1995 single “Colors of The Wind.” Her voice is in tip-top shape! While other RnB singers may take pride in bombastic highs and lows of the voice, the character of Vanessa’s voice prioritized clarity, diction and tone. The last selection from the portfolio was “The Sweetest Days” from the 1996 platinum-album The Sweetest Days.

Vanessa balanced the narration of her 30-year career with musical diversity and stories to forge a level of intimacy that a picture or quick video could not. With jazz and RnB selections under her belt, Vanessa paid homage to one of her idols, Chaka Khan, with the ‘70s funk-inspired performance of the 2005 single “Everlasting Love.” Vanessa continued to let her hair down with the fiery rock remix of her 1997 single “Who Were You Thinkin’ About,” and she joked that the song applied to one of her ex-husbands.

Tony-nominated Vanessa then took fans to the catalogue of her Broadway appearances, the first of which was a powerful rendition of “Creole Love Call” by her backup singer and co-star in After Midnight, Carmen Ruby Floyd. Before she performed “Stormy Weather,” Vanessa expressed her fondness for the late Lena Horne, an African-American pioneer in her own right, whose work also blended stage performance, studio films and studio singing.

The mother of four (including RnB singer Jillian Hervey of Lion Babe) shared her proud moments as a mother and three-time wife — all while being a Hollywood vet. The reflective words served as an empowerment segue to the performance of “Work to Do.” The final number of the evening as the 1992 hit “Save the Best for Last,” which received a standing ovation.

Much like Vanessa herself, fans expressed their enjoyment and gratitude for the show with smiles, bows and applauses, and now await the next exciting venture in her smooth and steady career.