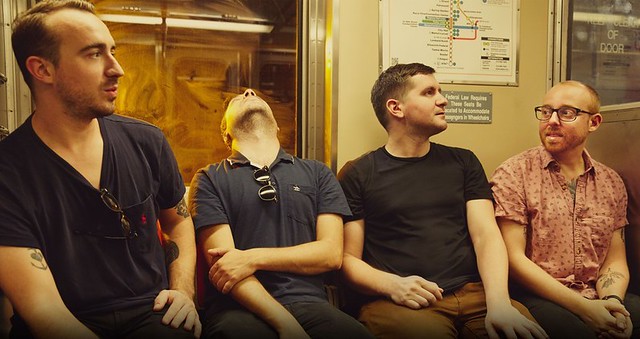 The Menzingers released their fifth full-length album After the Party on Feb. 3 via Epitaph Records, and they are visiting Rock and Roll Hotel on Wednesday, March 29 on tour. The show is sold out!

The Philadelphia quartet — consisting of Greg Barnett (vocals, guitar), Tom May (vocals, guitar), Eric Keen (bass), and Joe Godino (drums) – reflect on getting older, if not necessarily growing up, on their new record.

“We spent our ‘20s living in a rowdy kind of way, and now we’re at a point where it seems like everyone in our lives is moving in different directions,” said Tom of the record. Greg added, “We’re turning 30 now, and there’s this idea that that’s when real life comes on. In a way, this album is us saying, ‘We don’t have to grow up or get boring — we can keep on having a good time doing what we love.’”

Watch the official music video for “Lookers” by The Menzingers on YouTube:

The Menzingers formed in 2006 in Scranton, Pennsylvania, prior to moving to Philadelphia. They signed with Epitaph for their third album, On the Impossible Past, in 2012. The album was voted Album of the Year by Absolute Punk and Punk News.

Jon Caramanica praised the new album in The New York Times, writing, “The passing of time has altered this band’s songwriting for the better. What once arrived in raw splashes of energy has been thickened, complicated, and smoothed. Tom May, who writes and sings some of the songs, flirts with a touch of abstraction on ‘Thick as Thieves,’ which recalls the power pop-rock of the early 1980s.”