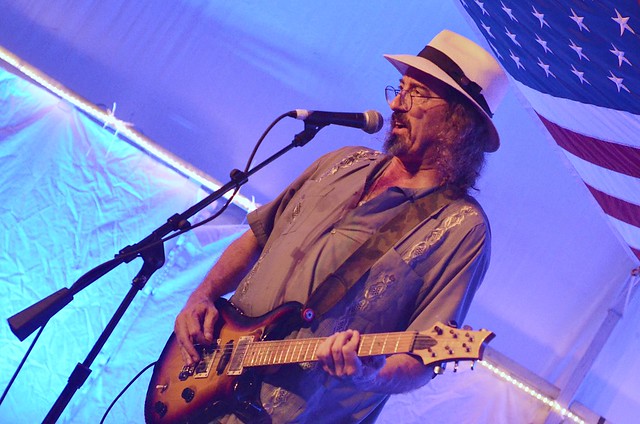 James McMurtry performs at the American Music Festival on July 5, 2013. (Photo by seanbirm)

James McMurtry steps on to an unadorned stage at The Birchmere Tuesday night, appropriately understated in his style and unpretentious in his presentation.

I am uninitiated. As such, I am to discover that many of the things he brings with him to this show are trademarks. This includes his dusty wide brimmed fedora, an oversized portrait painter’s shirt, whiskers, and a sense of someone whose inherent tension with the world around him is eased by performing music.

There are two guitars, one on either side of the solitary microphone, a sunset red six string and a tan colored twelve string. The former is deployed for the opening of the set, and again later on for the closers. From each instrument, McMurtry is able to conjure a playing style that is lush, articulated, and full of blood. The playing is superbly complimented by the venue’s sound, which is full and transparent.

McMurtry opens with “Melinda,” a song that speaks of walking in the morning mist and letting in the outside air. The sentiments are alluring but world-weary. McMurtry is a songwriter, his offerings infused with the literary traditions of his parents. The images he creates with the words in his songs are of dialog, of difficult conversations. Sometimes its unclear if it is with another or simply with the subconscious, but there is a steady undercurrent of needing to get the message through to someone — someone a little ornery at that.

“This time I’m gonna kill that bastard, this time I’m not gonna miss,” he sings in “Red Dress.” He ups the stakes in “Copper Canteen,” advising that “you don’t be yelling at me when I’m cleaning my gun, I’ll wash the blood off the tailgate when deer season’s done.” Rich with imagery though his songs may be, there aren’t many greeting card sentiments to be pulled from his repertoire.

McMurtry’s between-song banter eases the tension . . . somewhat. He’s got a wry sense of humor, and while it’s clear that he’s not the type to suffer fools or snowflakes, he is nevertheless laughing along with the audience. And insofar as this show has drawn out a strong contingent of the dedicated fans, these are people with a similarly jaundiced view of the venality of society. So no worries, they’re in on the joke.

At one point in between songs, McMurtry quips about having to change the name of the hometown of the song’s subject out of a need to fit the meter. He’s probably kidding, but it prompted me to pay attention to his use of meter and phrasing in his songwriting. Given the sometimes meandering nature of his narratives, his dexterity in this aspect of the craft is impressive. Never once do I catch him mashing a bunch of syllables together in a manner that’s at odds with the rhythm. This is especially evident on “You Got to Me,” a wrenching ode to painful growth. “Brought all this empty down on top of me, didn’t know but we were not to be . . .” I think you’re more likely to appreciate this song if you’ve got some mileage on you.

Along with all the skillful songwriting and lyricism, it also must be acknowledged that McMurtry is one hell of a guitarist. In a solo performance, he leaves the listener with no longing for further accompaniment. He has mastered the ability to make the 12-string sound like two instruments playing different parts, and the sound is resonant and tonally delicious, like that fifth type of flavor they talk about on cooking shows. This is especially evident on “Choctaw Bingo,” a chugging seven-minute freight train of sound and imagery, for which McMurtry is joined on stage by a hula hoop dancer. Neither performer drops a stitch during this extended workout. My date, who deserves credit introducing me to McMurtry’s music, advises me to “listen close to this one, it’s about where I grew up.”

McMurtry’s appeal has a lot to do with his ability to honor the struggles of regular working class people, and he does it without any trace of cliche. Given the current cultural climate, a lot of people would do well to give his songs a listen. In “Carlisle’s Haul,” he sings, “It’s hard not to cry and cuss, when this old world is just bigger than us, and all we got is pride and trust in our kind.” I could have come out to hear just this one song, and left very satisfied.