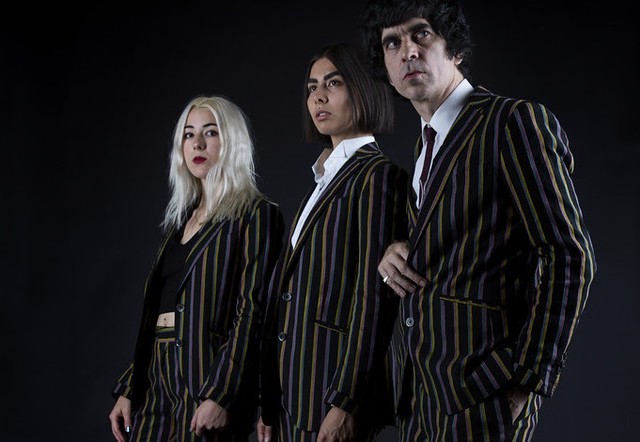 Chain and the Gang (Photo by Jamie Goodsell)

As you may have heard, Chain and the Gang, the rock ‘n’ roll outfit fronted by the irrepressible Ian Svenonius, have returned! They hit Australia and New Zealand for a tour last month. But you may not have yet heard that Chain and the Gang today announced a new album, Best of Crime Rock, due out June 2 via In the Red Records.

Best of Crime Rock might sound like a “best of” album, and it kinda sort of is. (Nothing is quite predictable with Ian, no?) It contains new recordings of hits from the band’s catalog as well as two new songs. One of those new songs is lead single “The Logic of the Night.”

Listen to “The Logic of the Night” by Chain and the Gang on Soundcloud:

After eight years and five albums, Chain and the Gang has tweaked its line-up again to consist of Ian, Anna Nasty (bass), Francy Graham (guitar), and Mark Cisneros (drums).

With regard to previous albums by Chain and the Gang, the band said, “You got them all, or always meant to. Now, YOU DON’T HAVE TO!!! Now, Best of Crime Rock is the only one you need.” They’ve really made it simple for us.

Remember Chain and the Gang’s motto: “Down with Liberty … Up with Chains!”

And up with a show? Perhaps we will see them at Black Cat soon?