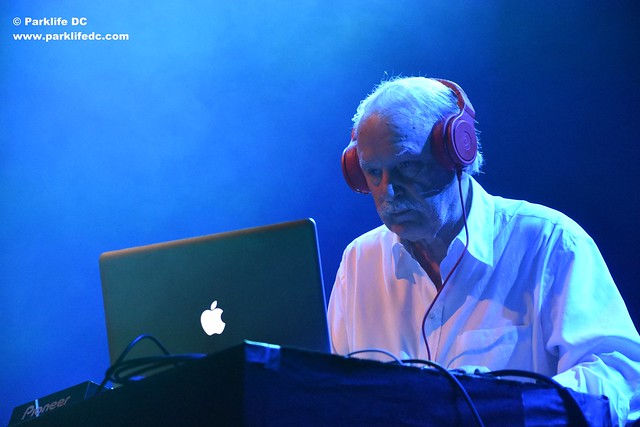 Waiting for the DJ to arrive, the crowd at 9:30 Club pressed up against the security barrier on Friday, chanting his name.

When the 77-year-old man of the hour arrived, the very full house erupted into cheers for their headliner — producer and tastemaker Giorgio Moroder, the legendary collaborator who brought synthesizers to Donna Summer and thereafter kept his finger on the pulse of global pop music.

From the start, Giorgio proved a charmer. “I am from Italy,” he told the crowd, “and I like cities like Rome and Venice. But your city, Washington, DC, is truly beautiful.”

Flattery aside, Giorgio more than exceeded the crowd’s expectations with a full set of favorite tunes, many of which he had a hand in creating. Giorgio played plenty of hits from the late Ms. Summer, whose passing in 2012 put him in the unforeseeable situation of having to release a statement on her death.

Everybody started dancing immediately when Giorgio spun songs like “I Love to Love You Baby,” “Hot Stuff,” “On the Radio,” and “I Feel Love.” To my surprise, Giorgio even dropped a mix of “No More Tears” by Donna and Barbara Streisand.

Throughout the set, Giorgio slid in many of his recent collaborations. He would occasionally point his microphone to the audience to capture a boisterous singalong, such as early in the show with his version of “Tom’s Diner,” featuring Britney Spears from his 2015 album Déjà Vu, where the audience took over for the scat chorus of “Do do do do, do do do do.” Giorgio charmed the audience with additional selections from his most recent album, notably the title track featuring Sia and “Diamonds” with Charli XCX. 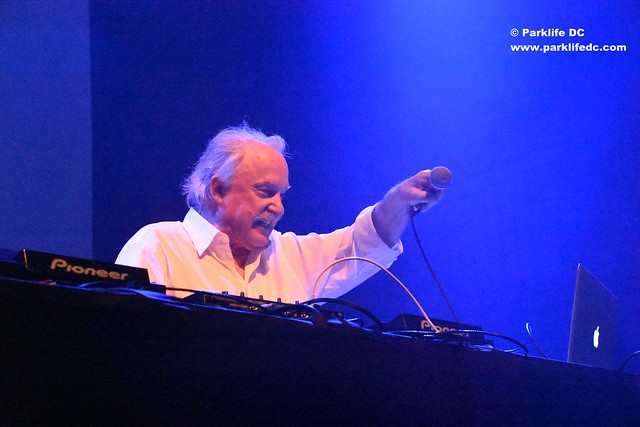 He repeated the microphone-to-crowd maneuver during mixes of “Take My Breath Away,” his Oscar-winning anthem for Top Gun originally recorded with Berlin, as well as other songs. And speaking of movie themes, Giorgio is a crown prince of ’70s and ’80s songs for movies, and he played his fair share of them during his set on Friday night. Early, he elicited applause for “Chase,” his theme to Midnight Express, and he also played “Flashdance,” “Neverending Story,” and “Together in Electric Dreams” (a personal favorite with the remarkable voice of Phil Oakey — yes!), all from movies of the same name.

Giorgio wasn’t all about stylistic nostalgia however. He proved terribly canny at mixing contemporary artists into his set. He showed quite an affection for David Guetta, tossing in “Play Hard” (featuring Ne-Yo and Akon) and “Dangerous” (featuring Sam Martin). He threw in Zedd (“Beautiful Now”) and Calvin Harris (“This Is What You Came for” with Rihanna), among others! Toward the end of the set, Giorgio placed a mix of “Faded” by Zhu, who he said is “a really good friend… a really great guy.” I actually hadn’t heard the track, but it was pretty damn cool, and if Giorgio likes Zhu, then I like Zhu.

The Italian synthesist moved about his DJ setup with precision and focus, but he appeared aware that the large crowd at 9:30 Club was very much there to *see* him as well as to hear him spin. So Giorgio would mindfully play to the audience, beckoning people to dance with outstretched hands or leaning the microphone forward to provoke their chanting. He demonstrated remarkable energy and a gregarious nature that captivated the crowd, inspiring smiles all around.

As when I last saw Giorgio during Moogfest 2014 in Asheville, North Carolina, he closed his set with the #1 movie theme hit that he wrote for Debbie Harry and Blondie — “Call Me” from the film American Gigolo. It was a fitting “last dance” (apologies to Donna Summer, but we also heard that disco anthem)!

To the delight of the world, Giorgio continues to sporadically play DJ sets around the globe, and he has some appearances scheduled in Argentina and Brazil in June and Spain in July. A toast to many more performances by the wise old master of disco and house! Make it a priority to see him when you have the chance. And let’s get him back to our area soon. 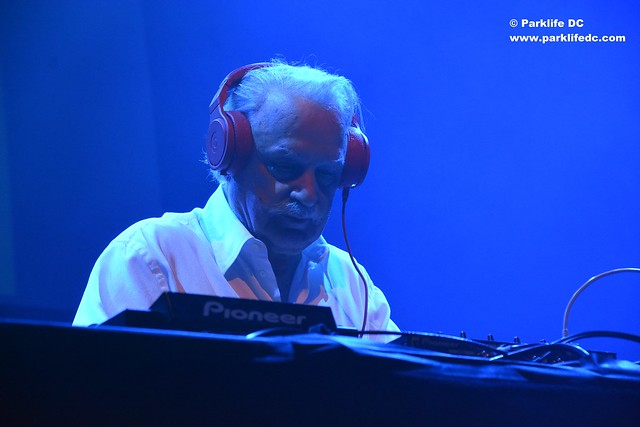 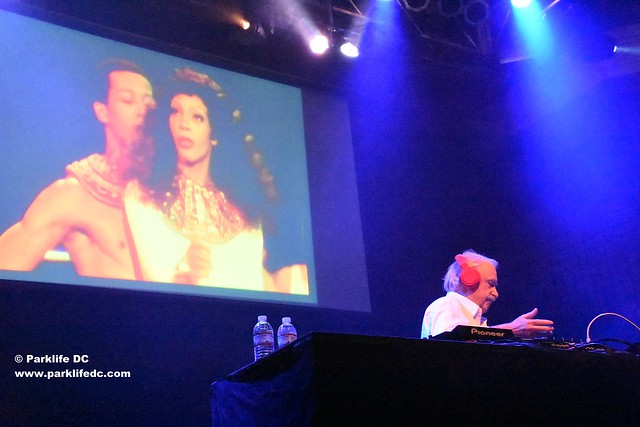 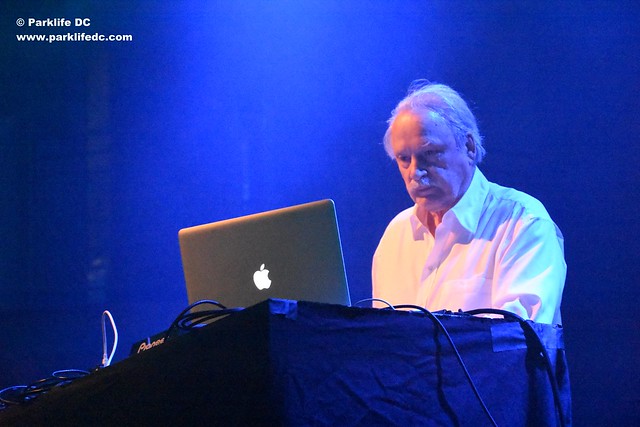 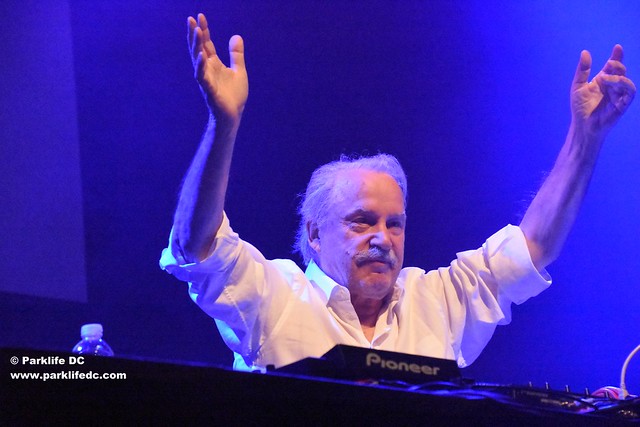 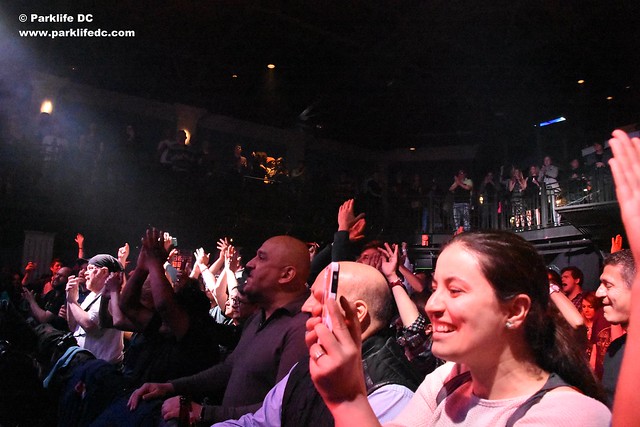 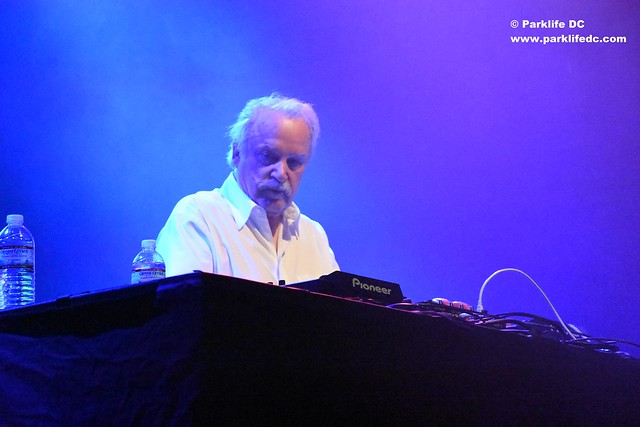 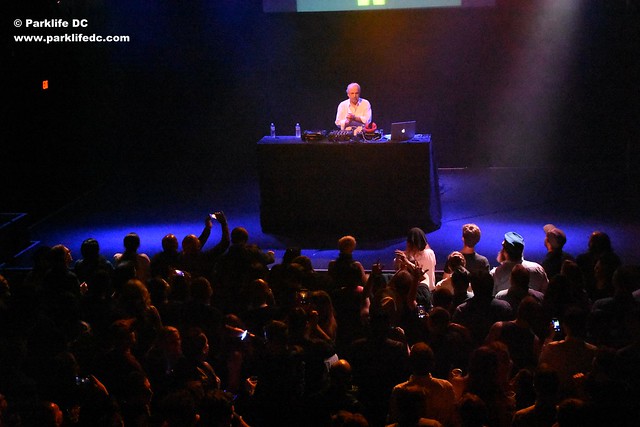 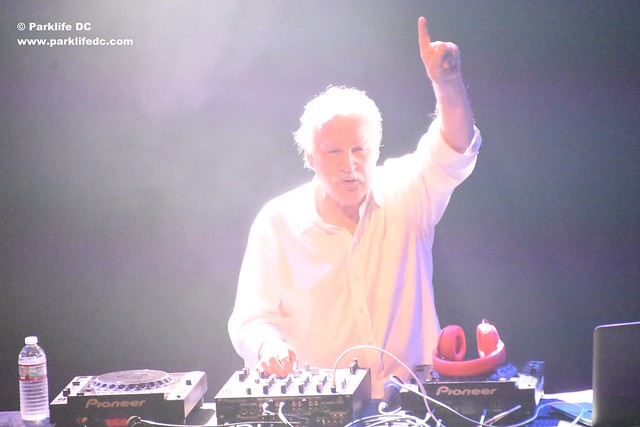 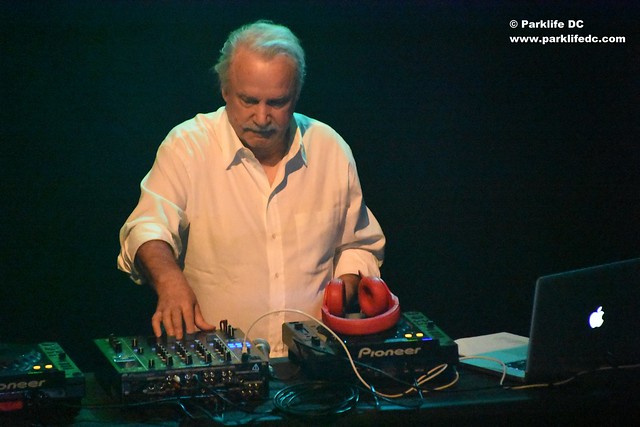 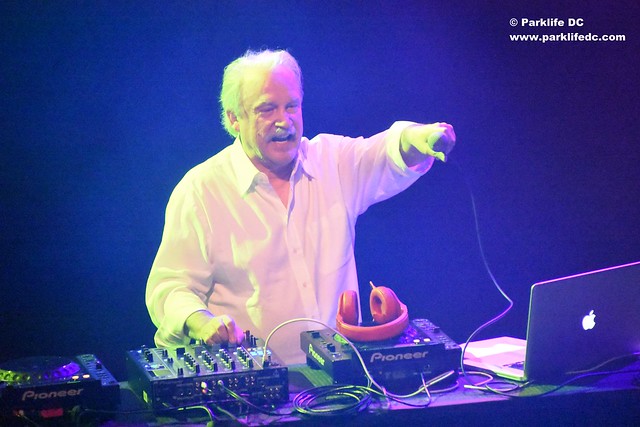