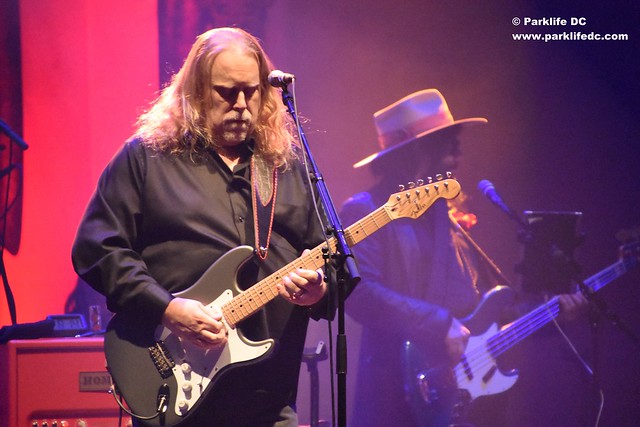 Warren Haynes performs with a supergroup at MGM National Harbor on Feb. 4, 2017.

As soon as I walked into Warner Theatre on Saturday, it was clear that Gov’t Mule has a very passionate following. It’s no surprise, considering they have been around since 1994 and were formed as a side project from The Allman Brothers. It was also clear that there is a pretty specific audience that this music appeals to.

Gov’t Mule made a stop at the Warner Theatre in DC on May 20 on their latest tour. The tour lines up with the release of their new studio album, “Revolution Come… Revolution Go,” slated for release June 9 on Fantasy Records.

Whereas some concerts have a very diverse crowd, I would say that this crowd was made up of a lot of people who grew up in the ’60s and ’70s. I am 25 and I am not sure if I have ever felt like one of the youngest people at a concert, but I did Saturday night. This is not necessarily a bad thing, but certainly something that stood out to me throughout the evening.

Gov’t Mule is a great example of a band who has perfected their craft. Warren Haynes plays a mean guitar and the rest of the group jams right along with him. They are described on Wikipedia as a “Southern Rock Jam Band.” I am not sure if that describes them all that well, but it’s probably about as close as you can get. You hear a lot of blues in their music, definitely some classic rock, and they also have reggae songs. They actually have a whole reggae album called “Mighty High.”

The band took the stage pretty promptly and did not hesitate to start the show. They started with one of my personal favorites, “Blind Man in the Dark,” which you can watch below. When a band has the sort of career that Gov’t Mule has, it’s not hard to find the crowd-pleasing songs because there are so many of them. It’s also not hard to please the kind of crowd that was at the Warner Theatre that night. The fans were loving every bit of the concert, even the lesser-known, newer songs. This show was purely about music.

There weren’t any flashy gestures. Bassist Jorgen Carlsson barely moved as he was playing. Warren hardly spoke except to say “Thank you” in between some songs. I think when you get to that stage of your career, the music speaks for itself, and it certainly did Saturday night. Gov’t Mule’s sound people did a great job balancing the levels of the different mics and instruments which made for a really good sound. It can be a challenge to get the balance right especially in a hard rock band. I also really enjoyed Warner Theatre and I think the venue is also to thank for the quality of sound.

If you enjoy classic rock and lots of guitar solos, Gov’t Mule is a group you should check out. If you are a musician, I think you will appreciate this bands cohesion as well as their individual abilities. If you are at a loss for something to listen to this summer, roll down your windows, crank up the volume and punch “Gov’t Mule” into Spotify and pick a song. I bet you will indeed enjoy yourself.