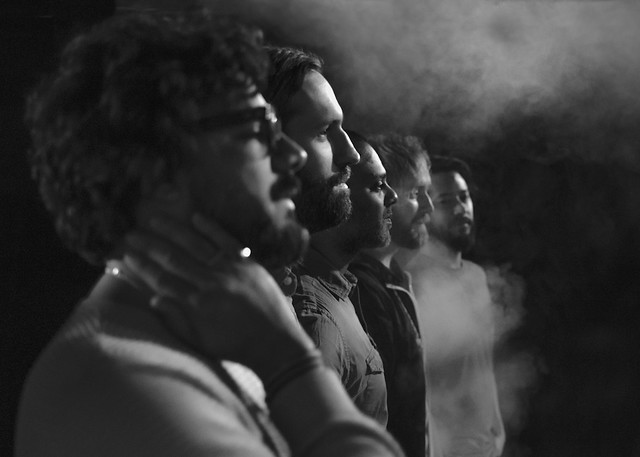 A local band showcase at 9:30 Club is a rare delight — but DC quintet Honest Haloway will headline four local groups on Friday, July 28. You can win tickets to go with Parklife DC.

Honest Haloway began as a solo project from songwriter Tim Kratzer in a DC bedroom circa 2010. By the next year, Tim recorded a debut EP, The Towns, with five synthpop songs reminiscent of music from The Vita Ruins, his previous band. Over the next two years, Tim developed the project into a full band with a rotating group of musician friends.

Tim then took a break but returned with Perigee, a second EP in 2014, a nuanced if melancholy dreampop album. Now, he’s recruited a full band consisting of himself, Fico Lazzaro-Colon and Ed Barnabas (both of Cedars, and Ms. Director), Greg Balleza (The Vita Ruins, Incredible Change), and Paul Burgess (Hot Hymns).

Honest Haloway is working on its debut full-length album with intent to publish it in 2018. Watch Honest Haloway perform “Escaper” during a session in Sperryville, Virginia, in April on YouTube:

Joining Honest Haloway at 9:30 Club are Joseph and The Beasts — Joseph Mulhollen and his three bandmates from Baltimore arriving with their debut album Gold Light. In addition the bill includes Incredible Change, consisting of Brok Boss and Ken Quam from Ra Ra Rasputin, along with a few other talented musicians, combining dance music with dark analog sounds. (Greg from Honest Haloway, and formerly The Vita Ruins, is also a member!) Topping off the evening are Sweepstakes, a psych-pop trio from Baltimore equipped with catchy songs from their debut album Tongues Out.

Parklife DC is giving away a pair of tickets to see Honest Haloway, Joseph and The Beasts, Incredible Change, and Sweepstakes at 9:30 Club. To win, simply leave a comment on this blog. You can leave any comment, but we would like to know which of the four bands are you most eager to see.

Comments will be closed at 5pm on Wednesday, and a winner will be randomly selected. The winner will be notified by email. The winner must respond to our email within 12 hours, or they will forfeit their tickets and we will pick another winner. We will email you instructions on claiming your ticket. Good luck!