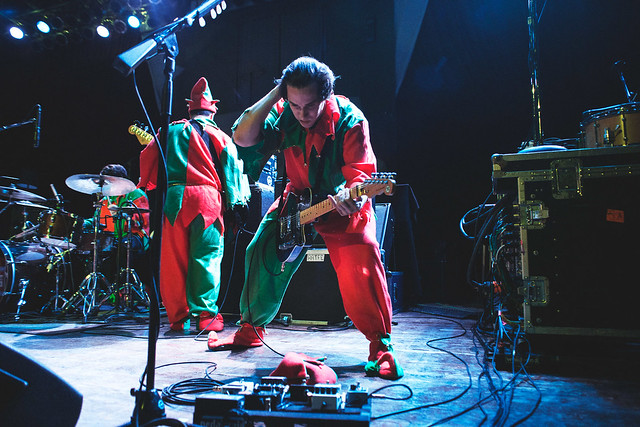 Opening for The Aquabats, Reggie and the Full Effect donned karate uniforms because, as stated by James Dewees, playing music and wearing costumes is awesome. James got his start in a metal band called Coalesce, where he played until he joined up with emo band The Get Up Kids. He played with TGK for quite a while but veered off onto a solo project that became Reggie and the Full Effect.

James has a really incredible repertoire, showcasing his talents with such names as My Chemical Romance and New Found Glory and also collaborated with several other acts.

The set was packed with an even distribution of new and older songs, not forgetting the long-time favorites like “Get Well Soon” and “Congratulations Smack + Katie,” but the band also played newer songs like “37.” James prefaced some songs with the inspiration and stories behind the songs. He remembered writing an earlier song while working in Pizza Hut after his girlfriend left (“Girl, Why’d You Run Away”). He followed up with another story about Fidel Castro’s niece not picking him up after playing the VMA awards show with New Found Glory (“Take Me Home Please”). And he shared another story about waking up on his birthday dreaming that monsters were going to kidnap him (“37”).

At various points in the set, costume-cladded cameos appeared. There was Peanut Butter and Jelly during “Congratulations Smack + Katie,” a bird mask during “Guerrara,” the Loch Ness Monster driving a “just divorced” signed cardboard car, and even the Bat Commander, leader of The Aquabats, came onstage to sing a duet!

If you have listened to Reggie and the Full Effect, you would know that this is not a single genre band. Due to the headlining band’s dichotomic demographics resulting from making rad ska music and also making a children’s television show, the song selections were more “family appropriate.” This was even acknowledged by electing not to play a song shouted by someone in the audience.

Even without the hard-driving and humorously inappropriate songs, the show was spectacular. I haven’t really paid attention to Reggie and the Full Effect for a few years, but rediscovering this band has saturated my Spotify playlists with these songs.