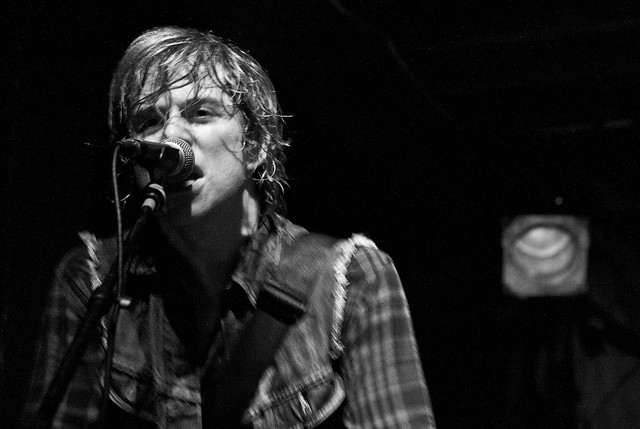 The Rocket Summer performs at Kingdom in Richmond, Virginia, on June 15, 2012. (Photo by Alexandra Bellink)

Bryce Avary aka The Rocket Summer made a stop at Rock and Roll Hotel on his Do You Feel 10-year anniversary tour on Tuesday. In doing so, he imparted the rarest of gifts in an attentive audience, stirring the desire to create.

The Rocket Summer is a multi-instrumentalist who has released six studio albums and one live album. But this tour isn’t so much in promotion of new music as it is a tribute to his Do You Feel album released in 2007 — and which at one point reached number 44 on the the Billboard 200 and number 16 on the Billboard Top Rock Albums charts. Much of Bryce’s set list was from that album, but he also threw in plenty of other favorites including “Walls,” “Of Men and Angels,” and “Brat Pack.” He does have a new single out called “Gone Too Long,” which actually released on cassette for a fun twist. You can check out that song below.

I saw a great show on Tuesday night. I can tell you that I hopped in my car Tuesday night and continued listening to The Rocket Summer on my way home, which is not something that I normally do after concerts.

Bryce’s music is appealing and easy to listen to. His songs are filled with emotion and quality song writing, and his live performance was no different. He continually thanked the crowd referring to us as a “community.”At one point, he mentioned that he was a part of us and actually came down in the middle of the audience to play a song. He then crowd surfed back to the stage.

At the end of the show, Bryce took song requests from the audience. This was also a pretty long show, and Bryce seemed in no hurry to get off the stage. I was disappointed to notice people leaving before the show finished. Even though it was a Tuesday night and maybe people had to work, I feel an artist like this deserves the extra 10-15 minutes of a person’s evening. I digress.

It was very inspiring to see how much passion Bryce has for his music and life in general. He talked about how much more music there is to write and expressed hope of being around for another 10 years.

All in all, this was a great night. As a musician, I walked away with some fresh inspiration and desire to create.

If you enjoy rock music, I highly recommend The Rocket Summer. It sounds like the Texas native plans to return soon so keep an eye out for him. I think anytime a musician can make music and play a show that leaves you happy, fulfilled, and inspired, they have given something that you cannot put a price on. I hope you will take a listen to some of The Rocket Summer’s music and become a fan just as I have.