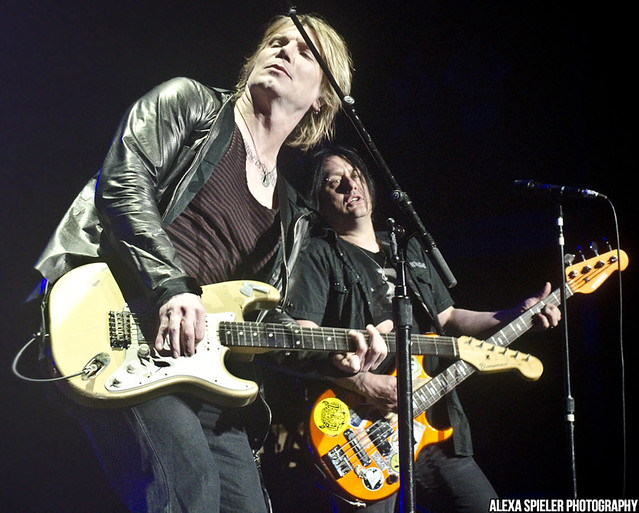 Watching John Rzeznik and Robby Takac on stage at Wolf Trap on Tuesday, it dawned on me that the duo is rather like the Daryl Hall and John Oates of ’90s alternative music, aren’t they?

I mean that in a sincerely flattering way. They had a certain similar dynamic as blonde-haired John took his guitar to the front of the stage to serenade the very crowded pavilion with “Tattered Edge/You Should Be Happy,” the title track from their brand-new EP You Should Be Happy, initially released in May via Warner Bros. Records. The soaring stadium rock song firmly put the audience on their feet to dance and clap along. As John sang, dark-haired Robby roamed the back of the stage, carefree and barefoot actually, jamming along with the rest of the band.

It wasn’t only the visual that made me think of Hall and Oates, but also the gents’ enthusiasm, professionalism, and sharp ears for irresistible riffs, coupled with their personal chemistry, recalled the famous soul duo.

Everyone at Wolf Trap was quite content with the new material, but as you would imagine, an electric shock went through the audience at the opening notes of “Slide,” their 1998 single from perhaps their most famous album, Dizzy Up the Girl. John cozies up to the microphone to sing the familiar words, feeding off the energy overtaking the pavilion, while Robby “slides” up to him to play in harmony with his bandmate. Robby is more like a lightning bolt, bounding from one side of the stage to the other, alighting next to John to face him briefly while the two happily share an instrumental break.

Prior to “Slide,” John reflected that Goo Goo Dolls last played Wolf Trap as recently as last year, but the band were very happy to be back so soon. “Wolf Trap is a place that captures memories and retains them,” John commented. “It’s a magical place.”

Clearly, that sentiment was endorsed by the sheer number of people who turned up to see them again. And the band kept the audience rocking with catchy power ballads from last year’s Boxes, their 11th studio album, with songs like “So Alive,” “Over and Over,” and “Long Way Home,” from which the current tour takes its name.

To wrap their main set, Goo Goo Dolls played their much beloved megahit “Iris” to the delight of the audience, who sang along to every word. The post-grunge #1 hit almost surely defines Goo Goo Dolls to most of the music-listening public, and the guys treated the song with grace and tenderness. John invited the audience to sing louder at the refrains, and folks heartily complied. It was easy to see why Goo Goo Dolls have hit a record 14 top 10 hits on adult contemporary radio generally and why Billboard magazine named “Iris” specifically as it’s #1 top-charting pop song from 1992-2012.

Goo Goo Dolls stay on the road tomorrow, Aug. 11, in Syracuse, New York, and continue their tour through Sept. 10, when they wrap it up in Albuquerque, New Mexico. And good news — they stop nearby at Pier Six Pavilion in Baltimore on Aug. 22 if you are ready to see them again ASAP. (Buy your tickets for Pier Six online.) You’ll have a decidedly pleasant time with these earnest, dedicated, and talented musicians when next you sing along with them.