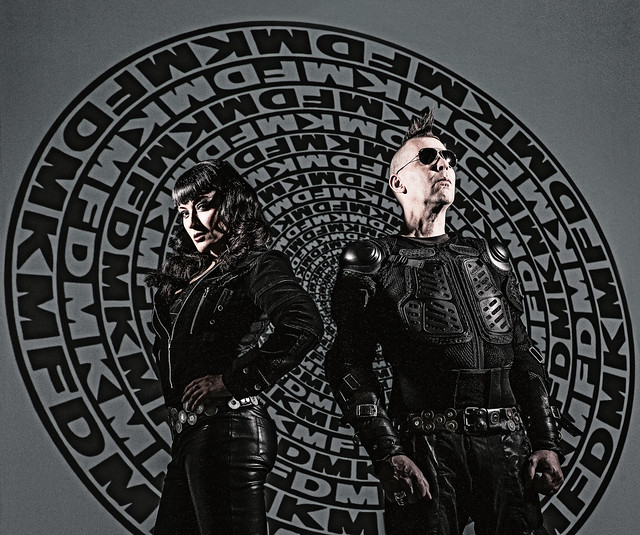 Sascha Konietzko founded German industrial rock band KMFDM in 1984, and the collective has gone onto release 20 studio albums. KMFDM released Hell Yeah, its most recent album, in August va earMUSIC and KMFDM Records. The band spends the month of October touring the United States with a stop at the State Theatre in Falls Church, Virginia, on Thursday, Oct. 5.

KMFDM pioneered crossing techno and heavy metal with their signature industrial sound. Sascha moved the band to Chicago in the mid-’80s and found success with WaxTrax! Records. KMFDM continued to evolve with each new album, and its latest iteration began with the addition of vocalist Lucia Cifarelli who officially joined the band in 2002.

The latest album won some praise from industrial outlets, with New Noise Magazine proclaiming, “[Similar] to industrial metal giants Rammstein and fellow Industrial pioneers Nine Inch Nails, the group’s fearlessness towards its principles and approach to songwriting has given them a global and diverse fan base. Hell Yeah is a fine record, not because it takes any crazy risks, but because it is a perfect example of a band executing its own meticulously crafted style without apathy or laziness.”

Watch the official music video for “Murder My Heart” by KMFDM on YouTube:

In an interview with Alternative Press, Sascha talked about some of the insprirations for the current album, exhibiting his typical wit: “KMFDM are not known as a band that sings about love and puppies. The ‘message’ KMFDM delivers since the early days, the project was founded in 1984, is one about awareness, asking questions that sometimes may be painful to ask, to not blindly follow the leader, to think for oneself.”