Kick off the fall season this weekend with the Watermelon Park Festival, one of our region’s most exciting Americana and roots music festivals, at Watermelon Park Campground (3322 Lockes Mille Rd, Berryville, Virginia) on Thursday, Sept. 21, through Sunday, Sept. 24. Several ticketing and camping options are available.

Keller Williams has been a favorite of the jam-band circuit for well more than a decade. With a highly rhythmic playing style, Keller is known for his brand of acoustic dance music. Keller calls his music “electro-hippie acoustic downtempo.”

Keller elaborated: “What kind of definition is that? It’s the kind of definition that will take you actually going to a show to decide for yourself and put it to your own words. This element of my life is what I refer to as my day job. Which is essentially me finding new ways to entertain myself on stage in front of an audience. Using technology and a technique, described by Dr. Didg, as live phrase sampling or looping, I am able to entertain myself for two sets. Nothing is prerecorded and all sounds and beats are created live by layering loops on top of one another and then singing or soloing over top if all if it.”

Marty Stuart & His Fabulous Superlatives is led by singer-songwriter Marty Stuart, who has five Grammys under his belt. On his latest release with his band The Fabulous Superlatives, the double-disc Saturday Night & Sunday Morning, via Superlatone, Marty captures all the authentic neon and stained-glass hues of country music — from love and sex to heartache and hardship to family and God — in 23 tracks.

“I’ve always thought that country music had a really unique relationship with gospel music,” Marty said. “It is interesting to me that country stars can sing drinking and cheating songs authentically, then at some point during the evening or the broadcast, take their hats off and say, ‘Friends, here’s our gospel song.’ If it’s the right messenger it seamlessly flows. That’s a time-honored tradition, from Jimmie Rodgers to Hank Williams to Johnny Cash. Rogue prophets and rogue preachers. That is my world.” 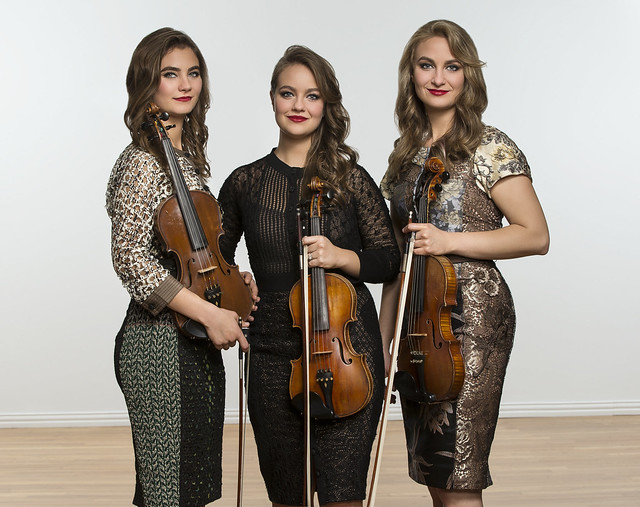 The Quebe Sisters began fiddling in 2000 in Texas, and they have perfected their accompanying vocal harmonies over three albums since then. They released their most recent album, Every Which-A-Way, in 2014.

The sisters’ past is as colorful and eventful as their future is bright. Growing up in Burleson, a southern suburb of Fort Worth, Hulda, Sophia, and Grace were ages 7, 10, and 12 in 1998 when they attended their first local fiddle competition in nearby Denton, and decided fiddling was what they wanted to do. The girls earned solo and group accolades early on, winning state and national championships.

The Quebes’ unbridled passion for American music, along with their talent, skills and a lot of hard work, have taken them far beyond their wildest early aspirations.

“One thing is for sure, you don’t see a group like The Quebe Sisters come along every day,” famed Opry announcer Eddie Stubbs told listeners on his own show on Nashville’s WSM. “Give them your undivided attention, and if you’re not already, you too, will become a fan.”