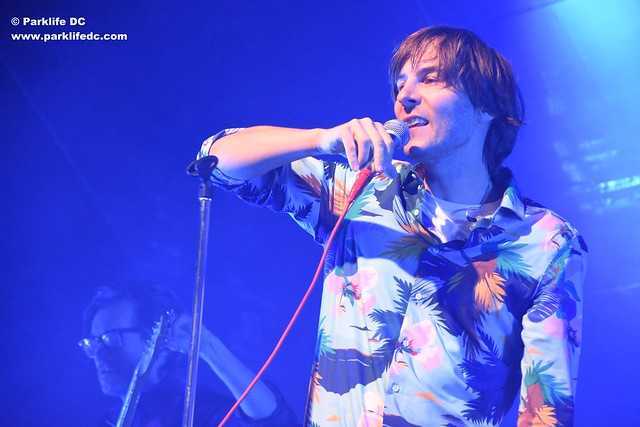 Thomas Mars fronts Phoenix at The Anthem on Oct. 16, 2017. (Photo by Mickey McCarter)

In the encore of the show by Phoenix at The Anthem on Monday, frontman Thomas Mars praised Prince, telling the audience how struck he was by seeing the iconic artist in a concert in Paris when Thomas was only 8 years old.

So it’s no surprise that the latest effort by Phoenix — the sunny album Ti Amo — was in some ways inspired by Prince as much as it was by Italian dance and romance.

At The Anthem, Phoenix opened their set with “J-Boy,” a single from Ti Amo and a recording that made use of a drum machine favored by the late Minneapolis-based superstar.

Live, the core band — Thomas, Deck d’Arcy (bass), Laurent Brancowitz (guitar), and Christian Mazzalai (guitar) — are augmented by Robin Coudert (keys) and Thomas Hedlund (drums), and the touring members are critically important to songs like “J-Boy,” which sparkles and shines under sprinklings of electronic keys and thumps of Italo beats.

For all its Italo disco inspiration, it’s interesting however how guitar-driven Phoenix remain, providing us perhaps with a guitar answer to traditional synth-forward followers of the genre like Saint Etienne.

That said, Thomas is congenial and easy-going performer, gregarious to his audience and generous to his bandmates. Making use of The Anthem’s large stage, he paced the length of it to share moments with Deck, Laurent, and Christian, and the gents worked in tandem to glide across smooth waves of European romance.

Soon, Phoenix perform “Entertainment” from their previous and fifth album Bankrupt! The performance gave the audience the jauntier cadence we have come to associate with Phoenix songs, particularly in the chorus, and the tune stirred ripples of heads bopping across the large floor of The Anthem. But then directly afterward, Thomas and company struck the very full house at The Anthem with “Lisztomania” from break-out album Wolfgang Amadeus Phoenix. It was that 2009 record that really put Phoenix on the map, and everyone swiftly recognized it from the opening notes. (Likely if you know only one indie pop song from 2009, this may well be it!)

Phoenix returned to focus the show on Ti Amo, performing the title track with gusto. Deck took to synthesizer, importing that earnest Italo flavor to the number, which wins the audience easily. Drummer Thomas continued to thunder along from behind, churning dance rhythms that again proved to be essential to the DNA of the song.

Shiny and new, The Anthem comes equipped with an amazing digital screen that serves as the backdrop of the stage, and Phoenix made full use of it. For much of the show, the band were projected in reverse, as with a mirror, behind themselves. The effect was like they were folding in as you watched Phoenix from a birds-eye view perform behind Phoenix with a normal view. But they made magnificent use of the effect in their set closer “Rome,” where they danced over a digital projection of the Coliseum, which served as the stage for the birds-eye Phoenix during the tune. I would be surprised to see this arresting a use of the digital display again anytime soon as it was a wonderfully harmonious pairing of a band’s stage setting to the capabilities of a state-of-the art venue. (Interestingly, “Rome” hails from Wolfgang Amadeus Phoenix, suggesting Italy has been on the band’s mind for a while.)

In the encore, Thomas mentioned that Prince concert he saw as a young boy. Leading into “Fior di Latte,” he asked the audience to hold their arms up and sway, inspired by Prince making the same request, during the chorus. The result was a sweet melding of artists and audience. Although the new song is named for Italian cheese, it’s really about that chorus and “we’re meant to get it on,” as it says. Prince surely would have appreciated the sentiment and the accompanying agreeable moment.

Tonight, Phoenix perform in Mexico but they will return for a handful of US dates in December, where they hit Milwaukee, Tulsa, and Reno. Step out onto breezy Italian shores and make a date night with Phoenix.

Here are some pictures of Phoenix performing at The Anthem on Monday, Oct. 16, 2017. 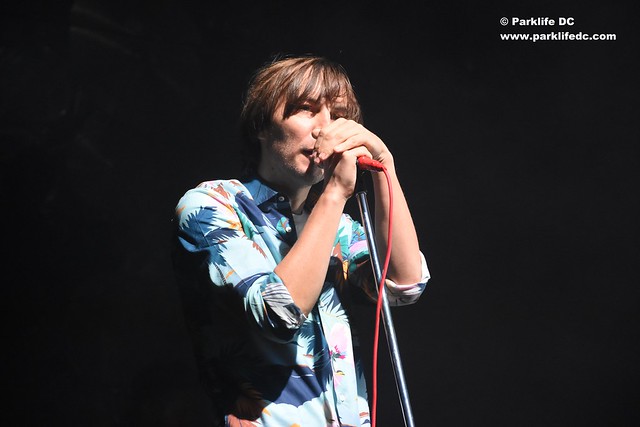 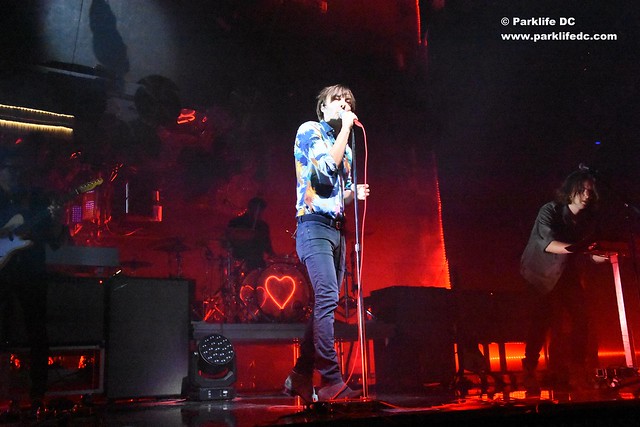 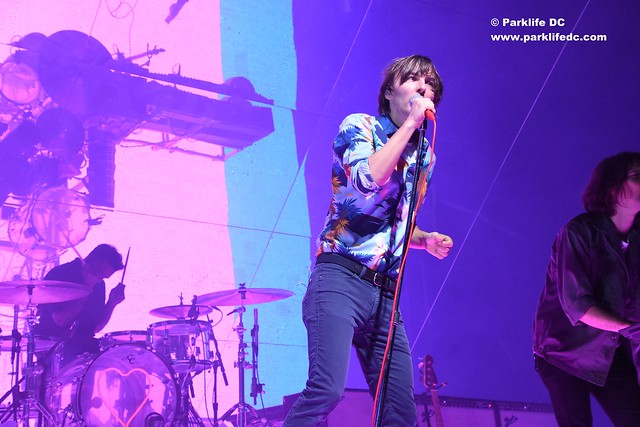 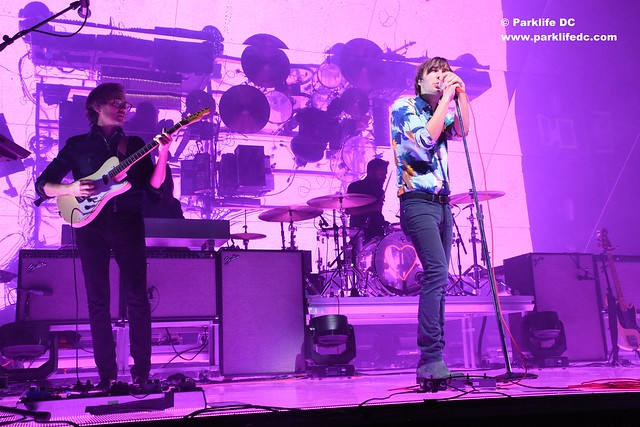 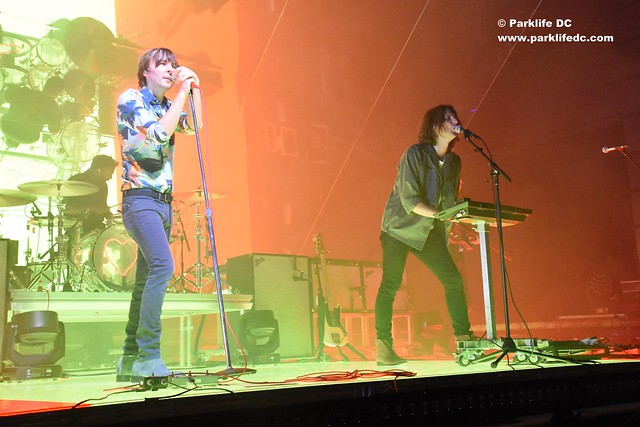 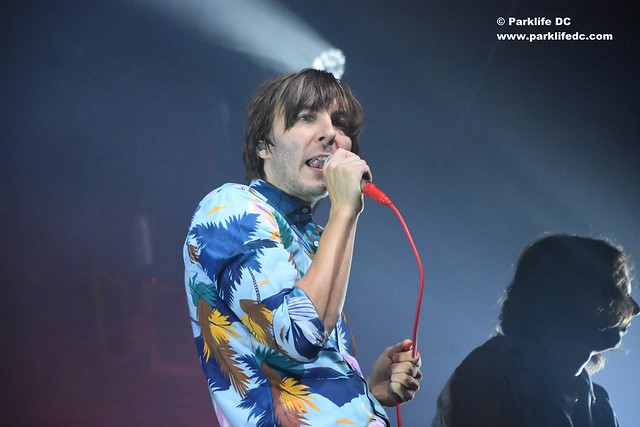 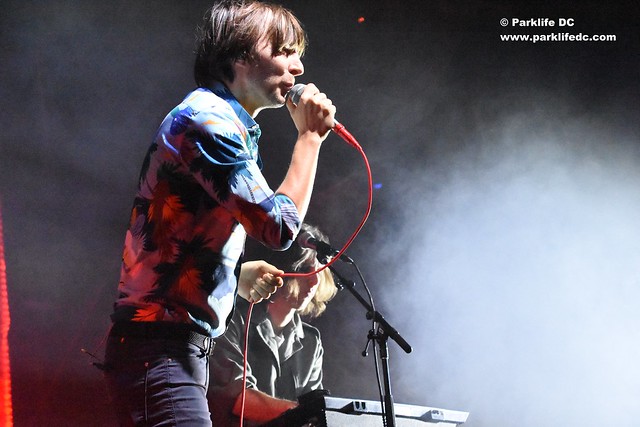 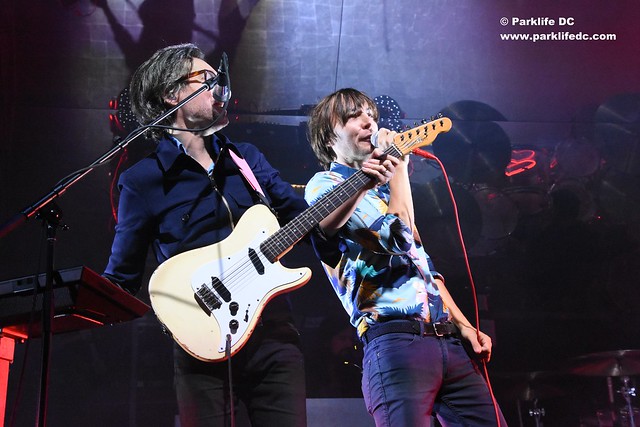 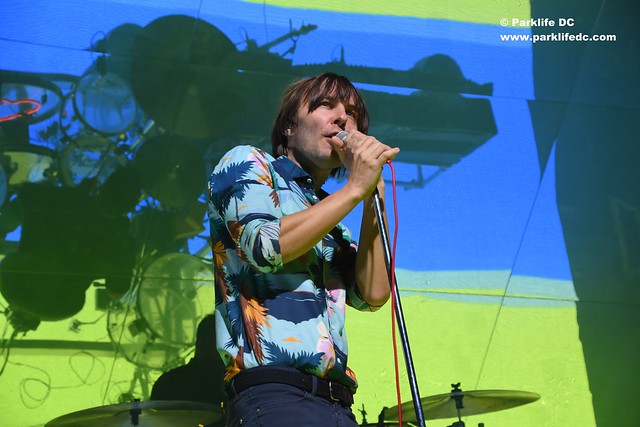 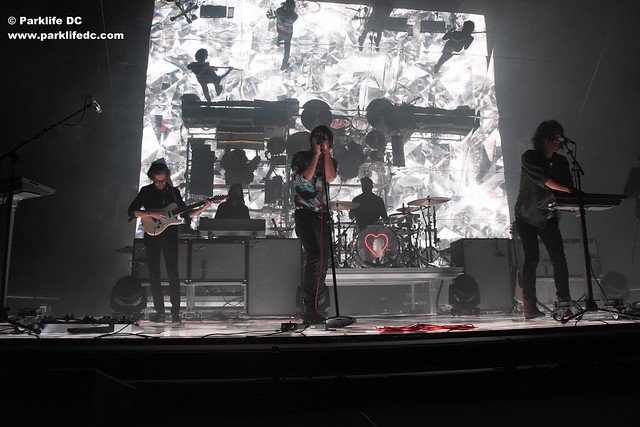 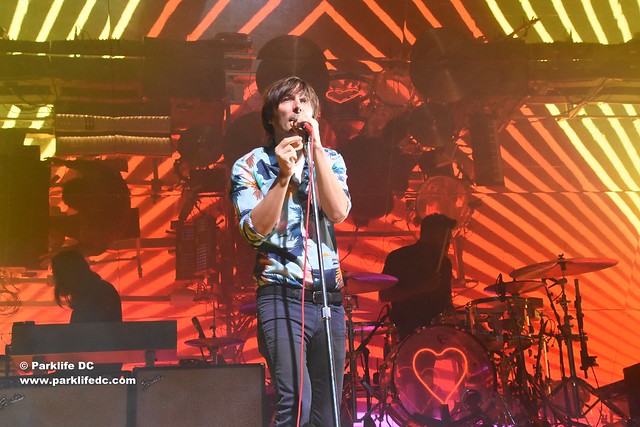 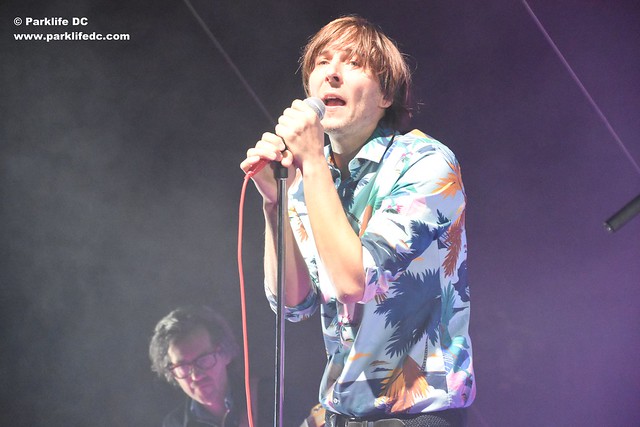 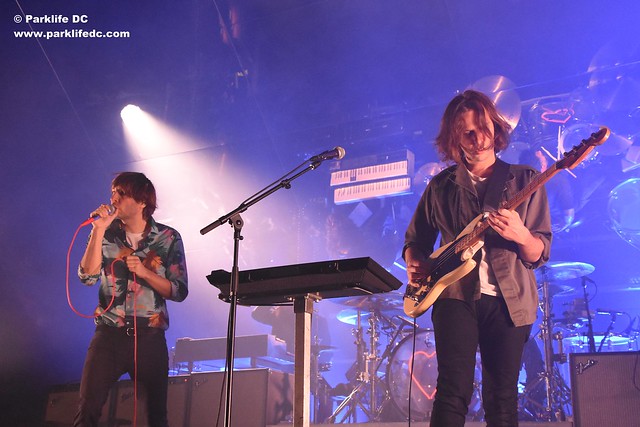 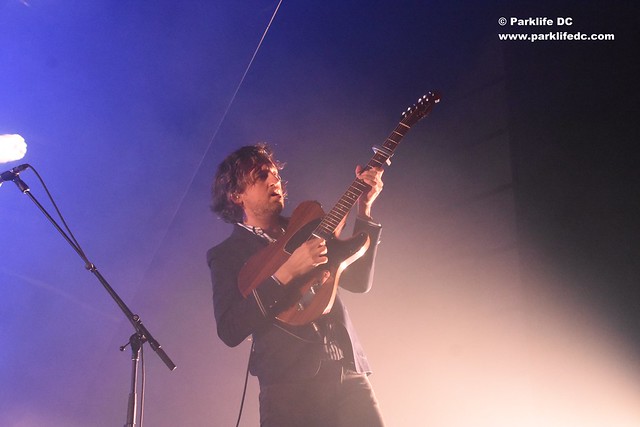 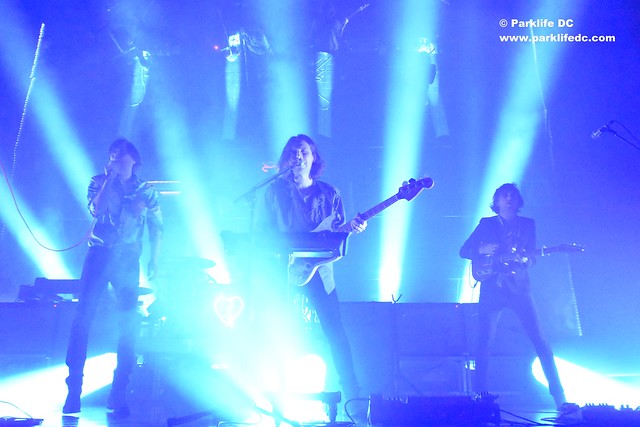 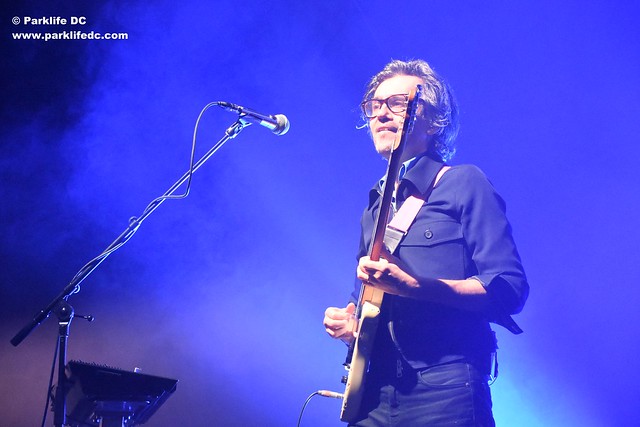 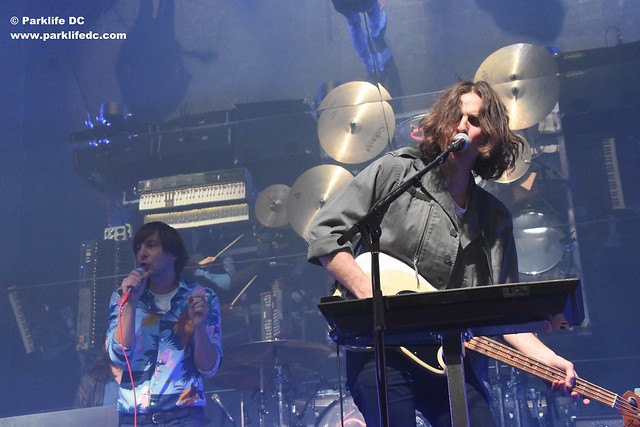 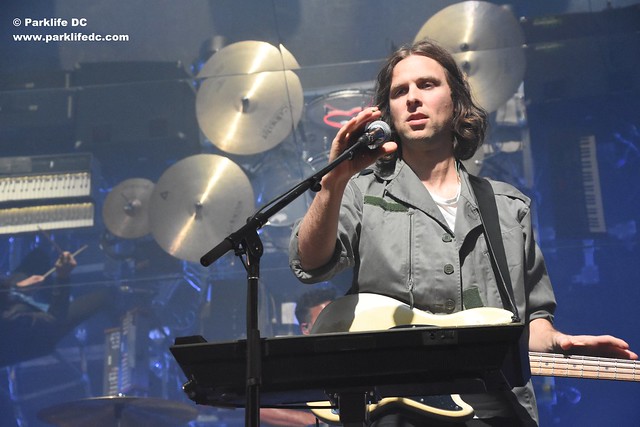