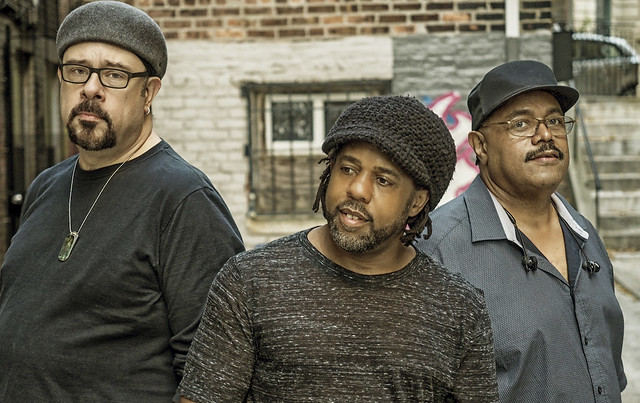 Victor Wooten released TRYPNOTYX, his 10th solo studio album, on Sept. 8, and he’s touring with Dennis Chambers and Bob Franceschini, who worked with him on that album, as the Victor Wooten Trio. The gents perform at 9:30 Club on Saturday, Dec. 16.

NPR All Things Considered hailed Victor as “the modern messiah of the electric bass guitar,” which alone is reason enough to see him. Victor also is touring with Dennis on drums and Bob on sax.

The album features songs like “Funky D,” which recalls the night a young Victor saw the Godfather of Soul perform for the first time, and “Cupid,” a song that presents itself as a theme to Victor’s life through bucolic textures, a sylvan flute, and spoken word exchanges with his children.

“Music is a great way — and a safe way — to teach just about any life principle,” Victor said. “To be in a band, you have to listen to each other. Bands are at their best when every instrument is different, not the same. Everyone takes turns talking. Everyone speaks their voice. A lot of times musicians might ask, ‘What would you like me to play?’ I say, ‘Listen to the music. The music will tell you exactly what it needs.’”

Victor has been performing since he was five years old, starting out in the Wooten Brothers. He went on to become a founding member of Béla Fleck & The Flecktones before ultimately going solo. In that time, he has been named “one of the Top 10 Bassists of All Time” by Rolling Stone and voted “Bassist of the Year” three times by Bass Player magazine reader’s poll.