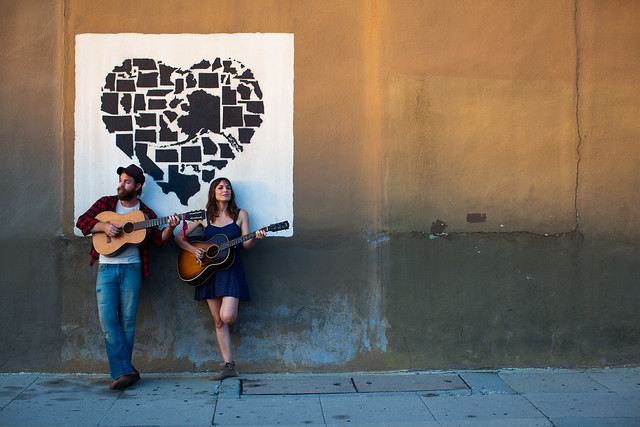 Indie film American Folk follows two strangers that meet on a plane the morning of 9/11. When their plane is grounded, the pair decide to travel from Los Angeles to New York in an old van in order to get back as fast as possible.

Released just last week, the film stars musicians Amber Rubarth and Joe Purdy, and those talented singers traveled to The Hamilton on Tuesday to lift spirits with a great show.

American Folk shows the state of the country after that memorable day and how Americans of all kinds came together to help each other out and encourage one another. In the midst of it all, it examines music as a tool for healing as Elliott (Joe Purdy) Joni (Amber Rebirth) bond over their love for old folk songs. Joe and Amber brought similar a similar feeling to our Nation’s Capital with their concert.

The show opened up with a short clip from the film followed by an introduction by the film’s producer Matt Miller. Joe and Amber then took the stage to a pleasant round of applause.

The duo began playing some of the songs from the movie’s soundtrack and also threw in some old folk tunes. At one point they decided to play a Woody Guthrie song and laughed about how they had screwed it up the other night. After taking an extended amount of time to make sure he, Amber, and their bassist were on the same page, Joe joked about how he promised us it would be the most unprofessional show we had seen. The audience loved that and applauded in laughter.

This was the first of many playful and funny comments Joe would make throughout the evening. That’s what made this performance so special: It was personal and relaxed. The combination of the comforts of The Hamilton and Joe and Amber’s charm seemed to lift the moods of everyone in attendance.

Eventually, Joe and the bassist left the stage while Amber performed some of her music, along with a beautiful cover of R.E.M.’s “Losing My Religion.” She then brought Joe back, and he began a solo set. He quipped that this was “the part of the show where people usually leave.”

Humor aside, it was clear from the beginning of the evening that Joe would not shy away from his thoughts on the state of the country and its administration. He promised a “real” State of The Union (while the actual State of The Union address was taking place that evening just miles away). The evening culminated in a performance of Joe’s song “Cairo Walls.” The emotion and passion with which Joe played the song penetrated the room, and the audience responded with some of the loudest applause of the evening. Amber returned, and they finished the show together.

This was a refreshing evening of music that was so appropriate for the times in which we live. Joe and Amber actually didn’t play as many songs from the soundtrack as expected. Instead, it was a tribute to many of the known and unknown musicians who have created folk music that will live forever. If there was ever a time for a resurgence of folk music, it’s now.

Joe and Amber’s vocals and guitar playing fit so well together, you’d think they’d been playing together for years. They entertained the audience with their remarks and their music, concluding in an evening that left everyone in attendance better off to have been there. I highly recommend checking out this duo if they come to your area.

In the meantime, check out the soundtrack from American Folk and watch the movie itself. You can see the trailer for the movie along with some of their music below.