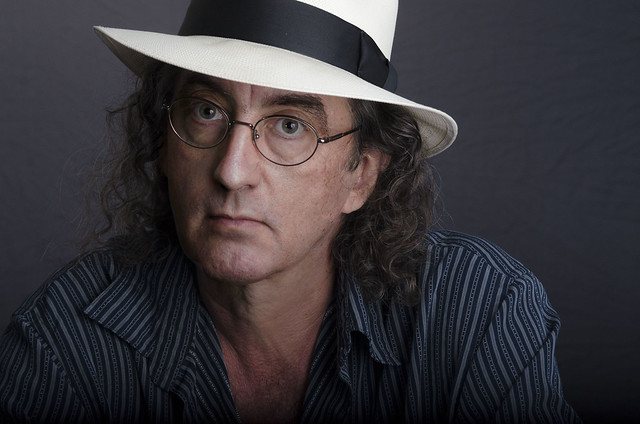 Americana songwriter James McMurtry teams up with rising tunesmith John Moreland to play two weeks of shows across the Midwest and East Coast this month, including a stop at The Birchmere in Alexandria, Virginia, on Monday, March 26.

James has made a satirical new single, “State of the Union,” available as a free download via his website http://www.jamesmcmurtry.com. The Austin singer cuts to the heart of the matter in his lyrics.

“My brother’s a fascist, lives in Palacios, fishes the pier every night.
He holsters his glock in a double retention.
He smokes while he waits for a bite.
He don’t like the Muslims. He don’t like the Jews.
He don’t like the Blacks and he don’t trust the news.
He hates the Hispanics and alternative views.
He’ll tell you it’s tough to be white.”

Listen to “State of the Union” by James McMurtry on YouTube:

“Every region of the United States seems to have its own way of Anglicizing, or rather, Americanizing Spanish names,” James said. “There’s a town called Palacios on the Texas coast. Texans pronounce it ‘Palashuss,’ which just happens to kinda rhyme with ‘fascist.’ While there’s usually at least one in every town, I don’t know for a fact that there’s even one actual fascist residing in or near the town of Palacios, Texas. This song, like most of my songs, is a work of fiction. Any resemblance of any of my characters to actual persons, living or deceased, is just plain lucky.”

James McMurtry has drawn crowds of course since his successful first album, the John Mellencamp-produced Too Long in the Wasteland (1989). He released his most recent full-length album, Complicated Game, in 2015 via Complicated Game Records.