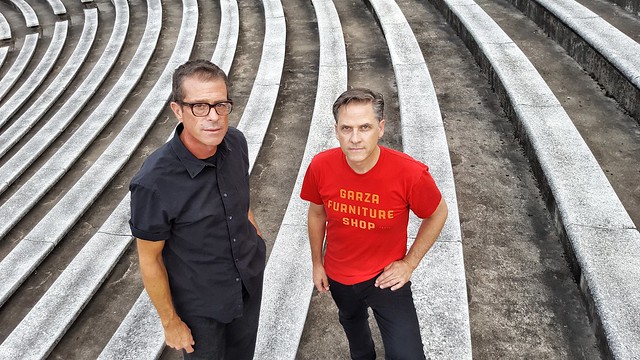 Calexico, the seven-man Arizona-based Americana band, released The Thread That Keeps Us, their ninth studio album in January via Epitaph Records. Led by founders Joey Burns and John Convertino, Calexico are touring their new material with a stop at the Lincoln Theatre on Friday, April 27.

Working with longtime engineer Craig Schumacher, Calexico co-produced The Thread That Keeps Us, “gathering musicians from across the globe to dream up an earthy yet expansive sound spiked with jagged guitar tones and flashes of distortion,” according to a press release.

“There’s a little more chaos and noise in the mix than what we’ve done in the past,” Joey said. “Whenever we’re writing and we come up with something that feels too familiar, someone will end up saying, ‘That feels good, but let’s keep going and see what else we can uncover.’ It’s been really important to the arc of this band’s evolution for us to always keep on trying new things.”

Watch the official lyric video for “Under the Wheels” by Calexico on YouTube:

In a review for Pitchfork, Evan Rytlewski praised Calexico’s storytelling capabilities: “Even more than its predecessors, the band’s impassioned ninth album, The Thread That Keeps Us, is dedicated to immigrant experiences and the pains of displacement. As always, Calexico are more interested in storytelling than grandstanding, but it’s hard to miss the role that border politics and environmental disasters play in the band’s latest batch of character sketches and vignettes. This is an album that pointedly humanizes the disenfranchised people whose voices are too often shut out of policy debates.”