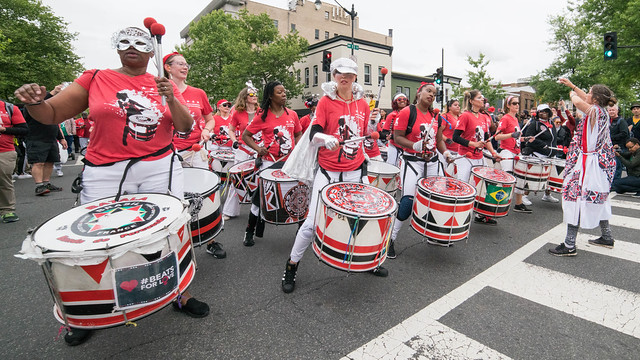 The Funk Parade March, free and open to the public, rolls down U Street NW, DC, on May 6, 2017. (Photo by John Sonderman)

For other details, Parklife DC presents the full text of a press release issued by Funk Parade on Thursday below.

For the first time, Funk Parade is announcing an General Festival Pass and Wristband ($10) to provide priority entrance into selected evening music venues. Additionally we will be hosting our first ever Featured Showcase at the Historic Lincoln Theatre ($15-20) featuring Ari Lennox, Mannywellz and more.

The $10 wristband system is part of an effort to create a more sustainable future for Funk Parade, with a model that can continue to pay artists fairly to be a part of the festival.

HOW TO GET YOURS

Funk Parade has partnered with Eventbrite to sell the passes. To buy yours, Click HERE. They will also be available the day of the event at the Funk Parade Volunteer Tents at the Main Stage and in front of the Lincoln Theater, during the day fair on Saturday May 12 from 1:00pm – 7:00pm

To pick up your wristband, present your Eventbrite receipt at the Funk Parade Volunteer Tents at the Main Stage or the Lincoln Theater, or go to any of the participating venues in the evening starting at 7:00pm.

As part of its Fifth Anniversary Funk Parade is hosting a Showcase at the Lincoln Theatre featuring Ari Lennox, Mannywellz, Ayes Cold, Underdog, Native Sun and Dreamcast. The show is programmed in association with Trillectro, and made possible with the support of the DC Commission on Arts and the Humanities, Chuck Levins Washington Music Center, Events DC, and the Office of the Mayor, among others..

Volunteer and Get Free Tickets

If you can volunteer in the next two weeks leading up to Funk Parade or the day of, all volunteers will be awarded a Free General Festival Pass. Be sure to follow Funk Parade on Facebook or Instagram to find out more about volunteer opportunities. Also feel free to sign up to Volunteer HERE.

Venues bringing the Funk Parade spirit before and after the Parade include U Street Music Hall, the Howard Theatre, and Union Stage. Check out these separately ticketed shows that will make your Funk Parade last a weekend:

In The Groove – FoSho Showcase at Big Chief – https://www.eventbrite.com/e/fosho-presents-in-the-groove-ft-dj-dan-charles-feelgood-tickets-45438395464

Funk Parade is a one of a kind day fair, parade and music festival in Washington DC’s U Street Neighborhood happening on Saturday May 12th. Funk Parade celebrates DC’s vibrant music and arts and the Spirit of Funk that brings us all together. From our first year in 2014 to now, hundreds of thousands of Washingtonians from all corners of the District have come together for the Funk Parade. We are excited for you to participate, celebrate, and get #FunkPowered. 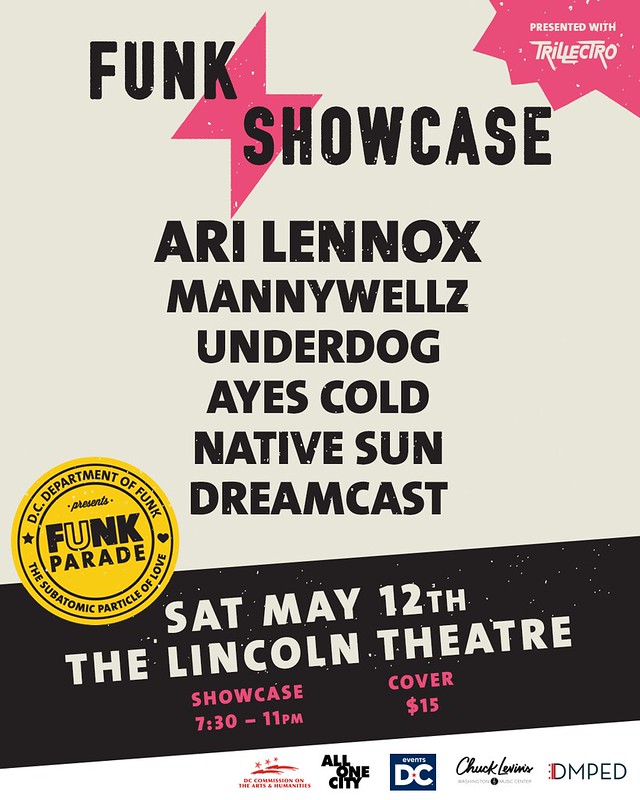