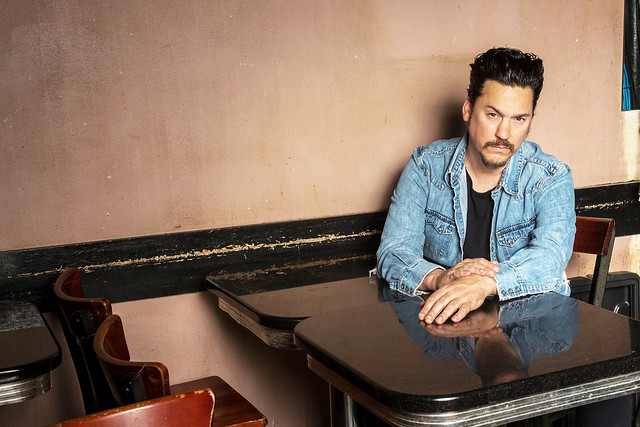 Many artists don’t truly understand how to open a show. Jesse Dayton gets it. Opening for fellow Austinites Reckless Kelly Friday at the State Theatre in Falls Church, he knew what he had to do.

At nine o’clock, Jesse had a venue full of very tired people (I know I was – it was my fourth show in five nights, and I hadn’t made it to bed before midnight on any of them). As Jesse’s drummer said to me later at the merch table, their job was to give the audience a “kick in the ass,” and they did.

Jesse’s set was loud and frenetic, and it roused the audience. Jesse is a hell of a guitar player, and he showed off his considerable skills with trick playing. He used time-honored call and response to get the audience involved and energized. He told stories and demonstrated a combination of country boy charm, Austin weird, and punk rock in-your-face attitude.

The next week, Jesse and his dad came back to see George. Again, they watched the opening act. This time, George came out, with a drink in his hand, stumbling around stage. He tripped, fell over, and passed out. Jesse told the audience that while Tommy Lee likes to sing about partying, and his “Girls, Girls, Girls,” Tommy Lee wasn’t getting so drunk that he couldn’t perform at the show he had to do to make up for the show where he’d been too drunk. Jesse then did a fantastic George Jones impression.

Listen to The Outsider by Jess Dayton on Spotify:

Describing himself as a “redneck who could do a Jerry Reed impression,” Jesse learned showmanship as a guitarist from country music greats, including Johnny Cash, Willie Nelson, and Waylon Jennings. But it isn’t just country that makes up Jesse’s DNA. Jesse told the audience about the “78-year old Creole woman” he had for a nanny who introduced him to Black blues musicians like Lightning Hopkins, making him “just a little funkier than all the other little white boys” when he started school. Showing his diversity on the guitar, Jesse played a fantastic, soulful blues cover.

A fan of The Clash growing up, Jesse has branched into punk, touring as the guitarist for X. He’s also worked with Rob Zombie, recording tie-in psychobilly albums for his films. When Jesse gets loud and shreds, going into almost a cowpunk oeuvre, you can hear these influences on his playing.

Jesse spoke up about Charlottesville, saying that his grandfather was a “highly decorated Nazi hunter,” and that he “married up” to a Jewish girl (actress Emily Kaye). He suggested that sometimes what’s called for is “an old-fashioned East Texas ass-kicking,” and played his song “No Time for Cowards.”

I’ve seen a lot of opening acts, and Jesse’s was one of the best. He injected a burst of energy into a crowd! From my pro wrestling fandom, I learned the phrase “working the crowd.” Jesse certainly worked the crowd on Friday night. He brought them to life and got them ready for the main act. It was an old-school, hardworking performance by a musician who really gets it.