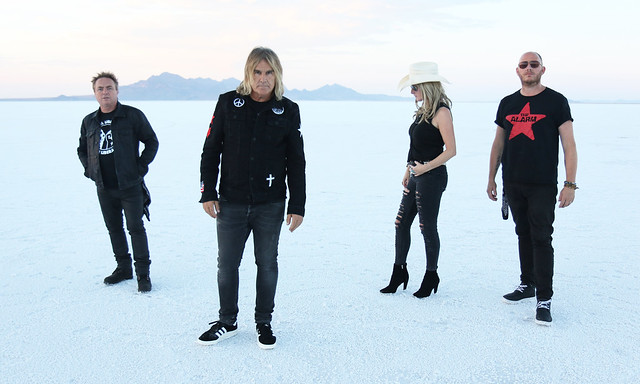 If you’re a fan of The Alarm, you know Mike has battled lymph cancer and leukemia, surviving both and returning to the stage with his wife Jules Jones Peters on keyboards and backing vocals. His trials, coupled with Jules’ own battle with breast cancer, fueled 11 new songs on Equals, Mike said.

“The songs were built out of what I had become,” Mike said. “I learnt a lot about myself and my relationship with Jules, and it’s all there in the music. I didn’t set out to write about what we were going through. All I had were these incredibly strong feelings that I found myself putting into words and writing down onto my phone without even thinking they might form the basis for songs.”

Watch the official music video for “Beautiful” by The Alarm on YouTube:

In addition to Mike and Jules, the band today consists of guitarist James Stevenson, bassist Craig Adams, keyboardist Mark Taylor, and drummer Steve “Smiley” Barnard. The Alarm embarked on a 27-date North American Tour to play songs old and new. Formed in 1981 in the Welsh seaside resort of Rhyl, the original band broke through on the back of the singles “Unsafe Building,” “The Stand,” “Sixty Eight Guns,” and “Where Were You Hiding When The Storm Broke?”

The latest album, Equals, placed The Alarm in the Top 200 of the Billboard Album charts in the United States with a #47 placement on the Independent Album chart and also a #36 position on the Alternative Album chart.

Inspired by the band’s success, Mike recently promised more to come. “The shows are going to be intense believe you me, with lots of new Equals music and a healthy selection of the classics — some of which have become more relevant than ever!” he said.

“As a result, new music is pouring out of me at this time, and I’m writing lots of new songs on an almost daily basis. The fact that I have been untethered from hospital treatments has created a rush of new energy that is pushing me deeper and deeper into creativity, so much so, that I’m sure the release of Equals will come to be viewed as the start of a new Alarm era with harmonious potential for a long and creative future!” Mike said.