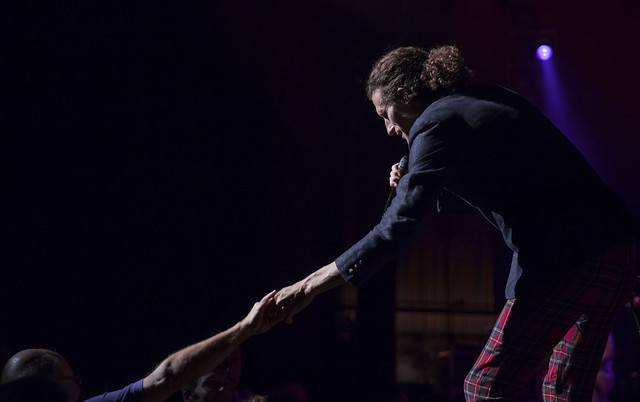 David Shaw of The Revivalists shares a moment with a fan at Wolf Trap on Aug. 19, 2018. (Photo by Will Colbert)

Every Sunday, around sunset, my emotional slide into a pre-work week slump begins, but not this past weekend. This Sunday, I took a trip to the Filene Center at Wolf Trap to catch The Revivalists. The 8-piece band from New Orleans provided a heavy dose of high-energy alt-rock that was the perfect cure for the Sunday blues.

The group came on stage like a cyclone, setting the tone for the night with a frenetic performance of “Stand Up,” from their 2015 breakout album, Men Amongst Mountains. Lead vocalist David Shaw, clad in plaid red pants, stomped across the expansive platform, making it clear that nothing was going to be easy about this Sunday. Like Tina Turner said on “Proud Mary,” it was going to be nice and rough!

On the unreleased “You and I,” the band demonstrated not only their ability to get people on their feet, but also a knack for moving a crowd. The audience danced and bounced along to the foot-stomping song made for revelry.

The outdoor amphitheater, tucked away in the Virginia suburbs, was filled with thunderous percussion and scattergun drums as the band played “Criminal,” from the City of Sound album (2012). The audience was then given a little space to catch their breath on the slow burning “It Was a Sin,” off Men Amongst Mountains.

Earlier this month the group released their latest single, “All My Friends.” The song is the first release from their highly anticipated fourth album, which is expected to drop this Fall. During his performance, David, now in his mid-30s, details the escapades of a wild and reckless 20-year-old version of himself. At that age we all needed the type of friends the song describes. A group of people, perhaps like David’s band, that keeps us from coming off the rails.

Listen to “All My Friends” by The Revivalists on SoundCloud:

The charismatic singer of the musical ensemble, named for the post-hurricane Katrina recovery, was still a wild man. On this quintessential summer night, David summoned the wolf as his spirit animal, giving the audience a guttural howl. He channeled that feral spirit throughout the show, but especially during uptempo performances of “Bulletproof,” “Keep Going,” and “All in the Family.”

In this day of vape pens, raising a lighter at a concert can seem like a dated practice. You may be hard-pressed to find a lighter if the occasion presented itself, but you do have a cell phone. Prior to the performance of “Catching Fire Flies,” from the 2010 Vital Signs album, The Revivalists frontman asked the audience to pull out their mobile devices and to shine a light. Much like the cover art for Bob Dylan’s, Before the Flood album, Wolf Trap was aglow with round orbs of light.

After over an hour of being on stage, the band stepped off a moment before reappearing for a two-song encore. “Soulfight,” off their 2008 self-titled EP, cooled the crowd as the night breeze carried the ballad across the green landscape.

The Revivalists ended the evening with crowd favorite “Wish I Knew You,” from Men Amongst Mountains. The audience roared as David gave one last howl and went into the song that reached #1 on Billboard alternative song charts last year and propelled the group to stardom.

It was a very good Sunday.