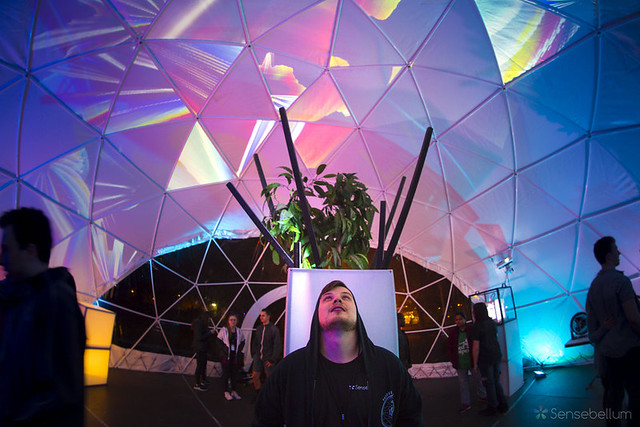 Entering the warehouse space that was set up to house the Dimensions DC multi-sensory art and music experience recently, I realized that I had been to the place before. Several years ago, the nondescript building was one of the sites for the Forward festival, a citywide electronic arts and music showcase. I don’t think this stretch of West Virginia Ave. was as developed back then.

There are definitely signs of nightlife now, and the Dimensions DC event was drawing a sizable crowd. It’s been a while since I’ve been to a proper warehouse party, but I do have some fond memories of socializing with edgy hipsters in cement boxes lined with hasty cloth partitions, exposed conduit, and the occasional random hole in the floor. Extension cords wind their way up to light sockets in the ceiling like creeping vines, supplying power to the ticket scanners at the entrance.

Once inside, multiple projectors mounted from the ceiling cast illuminated geometric patterns on the drab surfaces. Rows of silver streamers hang down from the gloom, the backdrop for countless selfies being snapped by the mostly twentysomething crowd.

For the portion of the installation that I was able to attend, the central spectacle was a octagon of semi-translucent screens in the middle of the main room. An array of video projectors had been set up to illuminate the screens from the inside, such that the viewer could see the images on display from any position in the room. The video images were rather like technological abstractions — waves, polygons, circuit like shapes — all pulsing to the beat of the music.

I’ve attended technologically fueled art exhibitions of this nature before, going all the way back to the ’80s. In those days, video was much more likely to be presented on large TV sets, as the projectors available at the time were out of range for most starving artists. The content was different as well, at least at the underground installations I attended. Video collages were much more likely to involve dadaist cutups of news footage, vivisection films, and awkward nudity.

The inspiration was coming from the likes of Burroughs, Maplethorpe, and Negativeland. The images were intended to be somewhere between provocative and shocking. The vibe at those exhibits was kind of like “Hey! I’m going to force on you the twisted entrails of post TV culture,” whereas now it’s more like “Don’t these images really enhance the sick groove that the DJ’s laying in the cut right now?” It actually took me a minute to catch on to the fact that there was a DJ in the middle of the array of screens, eerily silhouetted by the strobing light all around.

I expect the period of time I got to spend at Dimensions DC exposed me to only a fraction of the overall experience. I did note a few areas that appeared to be set up for some sort of interactive VR psych-out, which might have been better presented in the daytime or early evening.

But I’m encouraged! There is definitely a lot of talent and creativity in the scene contributing to this event, eager to experiment with sound, light, and technology. And there are spaces available to host something as eclectic as this as well (for the cynics out there who are convinced that they’ve all dried up.) If you’re an adventurous sort of person, events like this might be a nice diversion from the endless parade of identical brewpubs in the overly gentrified parts of town.

Although Dimensions DC, presented by Fathom and Nu Androids, exhibited for one weekend only on Sept. 28-30, explore its offerings at its website.