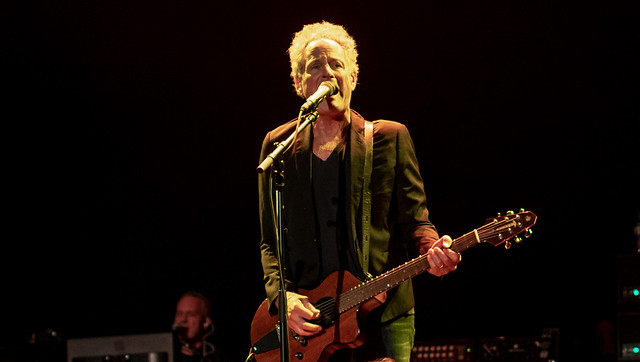 Upon the stage of the gorgeous Warner Theatre, singer and guitar virtuoso Lindsey Buckingham performed songs spanning a career dating back to the 1970s. Touring in support of his new multi-disc greatest hits record, Solo Anthology: The Best Of Lindsey Buckingham, Lindsey played a two-hour set to a crowd of feverish baby boomers.

The quiet and intimacy of the Warner Theatre emboldened the fans in attendance, with repeated screams of “I love you, Lindsey” in between songs, as well as one woman’s cry for Buckingham to “Give me all your babies!” Lindsey took multiple opportunities to talk to the crowd, and at one point made the tongue in cheek statement that “We are here tonight for a number of reasons,” eliciting a round of laughter from the fans who were acutely aware of Lindsey’s exodus from Fleetwood Mac as well as the news reports that he is now suing his former bandmates.

Lindsey focused most of the set on songs from his solo career. Beginning the night with “Don’t Look Down,” the opening track to his 19992 album, Out of the Cradle, the song was a perfect start, as the song begins with a very intricate solo which shows off Lindsey best qualities as a guitarist.

Stream Solo Anthology: The Best of Lindsey Buckingham on Spotify:

Lindsey’s signature style of fingerpicking allows him the ability to play the guitar in a way that very few players can. The use of all five fingers on his right hand to individually pluck the strings gives Lindsey a style that essentially allows him to play both rhythm and lead guitar simultaneously, which was beautifully showcased in the performances of the song “Not Too Late” and the final song of the night, “Rock Away Blind.”

The seated venue was not an issue for those who wanted to dance as people took to the isles to dance along to hits like “Go Insane,” “Doing What I Can,” and “I Must Go.”

While the audience showed their solidarity for Lindsey with shouts against his former Fleetwood Mac band members and calls of “Fleetwood Who?,” the fans still held some of their biggest cheers for when a Fleetwood Mac song was played. Just shy of one hour into the set Lindsey played the folksy “Never Going Back Again” off Fleetwood Mac’s most famous record, Rumours.

The songs “Big Love” and “Tusk” had everyone on their feet, and people were running to the stage as Lindsey screamed the chorus to “Go Your Own Way,” because in a fun act of fan interaction Lindsey kept leaning into the crowd and allowing everyone to smack the strings and neck of his guitar, adding feedback and distortion to the fast tempo song, and giving the fans an experience that would not be possible if he were high up on an arena stage.

Lindsey continues to tour North America through November.  Catch him for an the experience of an arena and the intimacy of a showman.