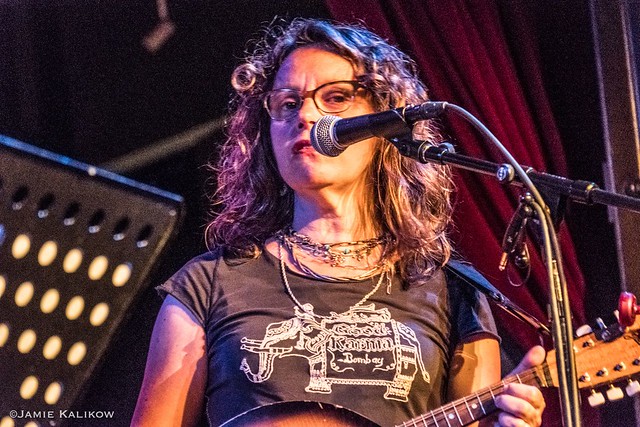 Lucy is touring behind her new album, Everyday Street, which is only available at her shows or on her website. Lucy explained that she took a DIY approach to the album, self-producing the record in four days, with some tracks recorded in a single take. Most of the album is just her singing and playing guitar, with some guest vocals by Richard Shindell and Shawn Colvin.

The singer-songwriter told the audience that she’d never had a dog until recently, when she gave into her daughter’s begging. She was surprised, she said, at just how much she has come to love this animal. Her daily walks with her beloved pet were the spark behind the creation of the tender “Everyday Street.”

For once, Lucy said, she didn’t listen to political talk radio on the drive down from New York City, where she lives in Greenwich Village with her husband and almost-16-year-old daughter. Instead, she told the audience, she “jammed out” to Steve Earle almost the whole way down. Inspired, she played Steve’s love ballad “Somewhere Out There.”

Lucy explained that, in 1982, she met fellow aspiring folk singer Shawn Colvin, and they became close. A rift developed, and after many years, they reconciled. Her new song “Old Friends,” which features guest vocals from Shawn on the album, beautifully recounted this story.

In addition to being a renowned mathematician, Prof. Kaplansky was also quite the piano player, and he composed a number of songs about math, Lucy explained. Lucy recorded a number of these songs on Kaplansky Sings Kaplansky, which she only thought too late to call “Kaplansky Squared,” and she sells the album exclusively at shows. Lucy sang her father’s song about pi a capella.

In her neighborhood of Greenwich Village, Lucy said that she used to see Philip Seymour Hoffman all the time. He’d wearing jeans, a shirt, and baseball cap, walking his kids to school. Lucy dedicated a song to home that observed how his oldest daughter now looks just like him and walks his younger kids to school.

On Everyday Street, Lucy crowdsourced the covers, allowing her fans to pick what she included on the album. By far, she said, the most requested was Bruce Springsteen’s “Thunder Road,” and she proved that the song is just as compelling stripped down as it is with a full band.

One night, Lucy told the audience, as she and Shawn were singing pretty much whatever they wanted, the songwriter Robin Batteau walked in and stunned them with the haunting “Guinevere.” “And I’ve been singing it ever since,” Lucy said.

Lucy interacted a great deal with the audience, taking requests and meeting with fans after the show. I thanked her for allowing me to cover her fantastic performance. Lucy was kind enough to share her new album with me, and I strongly recommend picking up a copy to anyone who enjoys folk or acoustic music. And if you have a chance to see Lucy live, you shouldn’t miss hiss her.