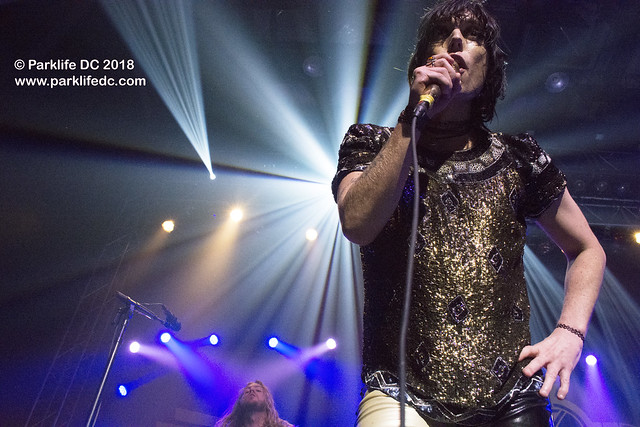 When introducing a new song by The Struts at Rams Head Live recently, frontman Luke Spiller confessed he made the mistake of reading the comments to the song’s video on YouTube.

“The Struts should stick to what they know,” read one disgruntled comment on the song “Bulletproof Baby.”

Undeterred, the charismatic singer declared, “Fuck them. The Struts do what they want!”

And with that, Luke launched into the very good song “Bulletproof Baby” from Young & Dangerous, the sophomore album by The Struts, released in October by Interscope Records. The song proved more of a ballad than many of The Struts’s straightforward stompers. Even so, The Struts “strutted” their stuff all evening on Sunday in an engaging, entertaining show that divided its focus on the new album and their 2014 debut record, Everybody Wants.

The concert began strong with guitarist Adam Slack, bassist Jed Elliott, and drummer Gethin Davies taking their positions on stage to kick off “Primadonna Like Me,” another single from the band’s second album. Luke bounded out to cheers after the opening notes and swept from one side to another, brimming with signature swagger and alerting the sold-out house to the fact that they were attending a big ol’ rock n roll show. The Struts continued showcasing the new album with “Body Talks,” erupting into their appealing glam sound.

Stream Young & Dangerous by The Struts on Spotify:

Many of the best numbers came from the first album, of course, and the audience cheered for “Dirty Sexy Money,” which arrived early in the show. By this point from my vantage point, you could truly feel the bond between Luke and guitarist Adam. With is flowing hair and killer riffs, Adam planted himself as a stoic anchor on stage right as Luke windmilled around him. Occasionally, they would fall in line side by side, and the charming singer and masterful guitarist together would electrify the stage.

On Sunday, perhaps the best segment of the show began with the energizing “People” from Young & Dangerous, which segued into one-off single “One Night Only.” For the single, Luke took a seat at a piano, and his performance was food for the soul as he displayed subtle skills that underly his more overt singing chops. After “Only One Night,” The Struts dove into one of several extended jams with their cover of Bruce Springsteen’s “Dancing in the Dark,” a very familiar song that the band nonetheless make their own in performance.

During that performance, Luke sought to recruit a “Courtney Cox” to the stage in a reference to the famous moment when Bruce famously pools the young actress out of the audience in the music video for “Dancing in the Dark.” Although we expected Luke would identify a pretty young dancer, he instead recruited a pair of children that delighted the audience. The brother and sister duo carried with them a Luke Spiller puppet, which “sang” along to a nonsense refrain Luke interjected into the chorus. We suspect Luke wanted to keep that debonair puppet for himself!

The Struts continue to conquer stages of all sizes as they romp through the United States, and you should see the glam English rockers at your next opportunity. Luke and the guys are absolute heroes for their unabashed embrace of ’70s excess, and they positively thrill audiences wherever they perform. Here are some pictures of The Struts performing at Rams Head Live on Nov. 18, 2018. 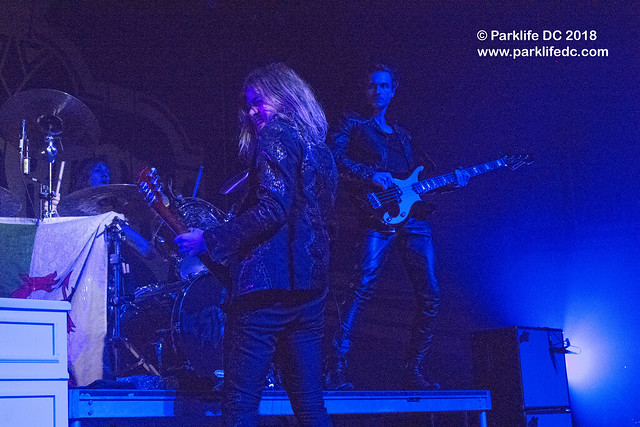 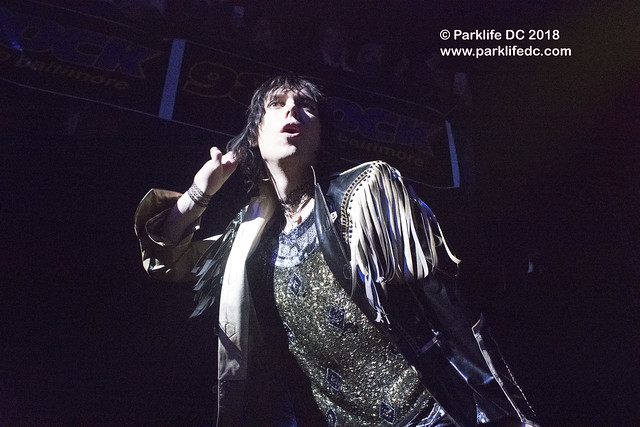 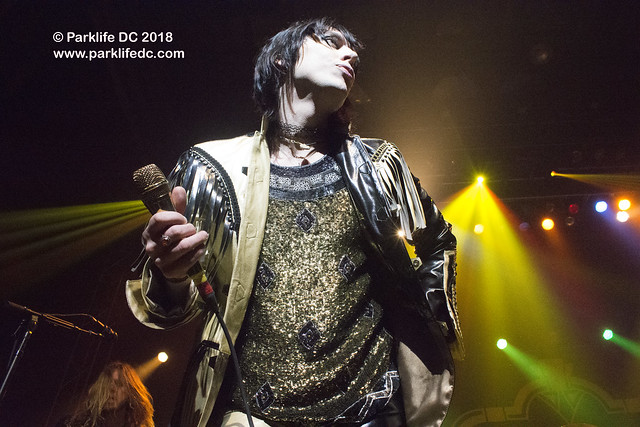 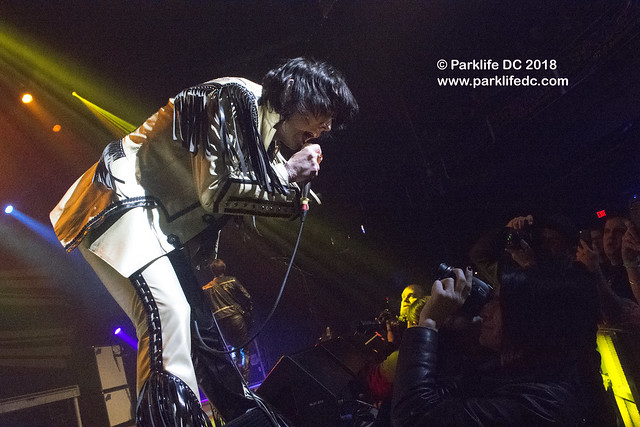 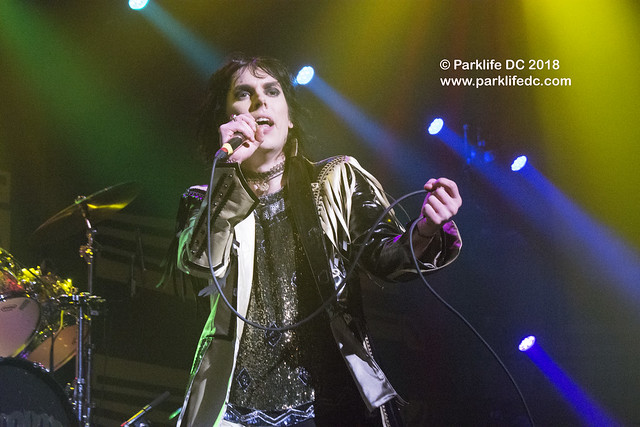 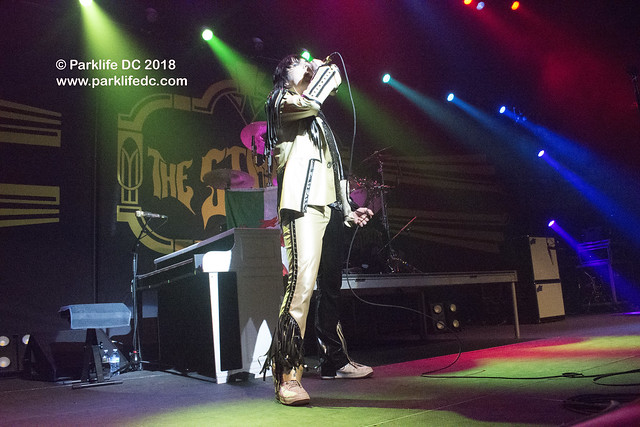 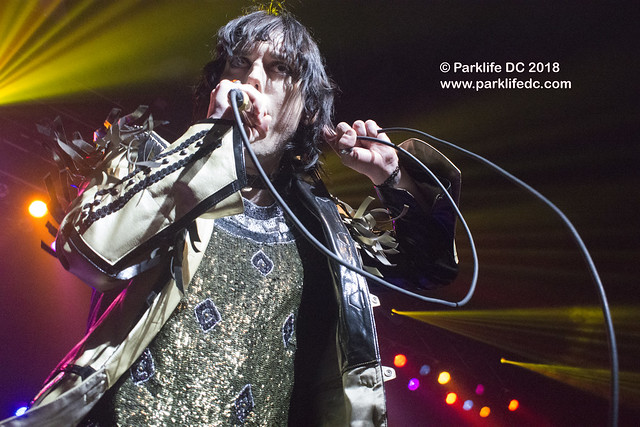 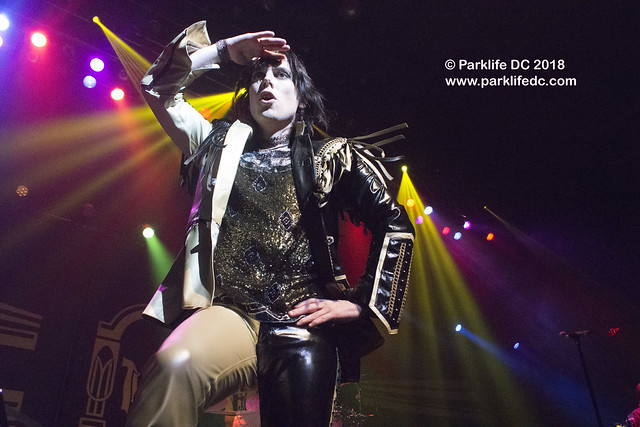 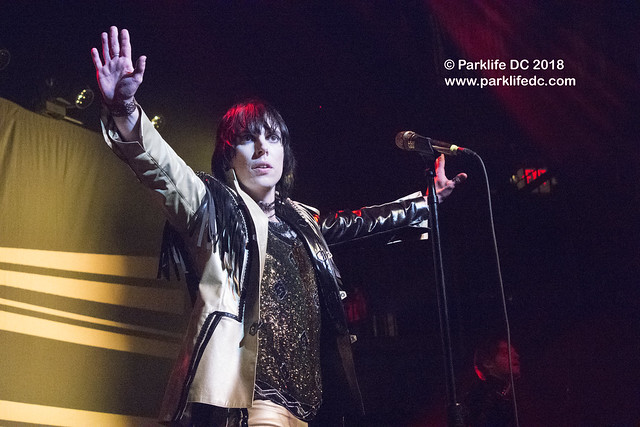 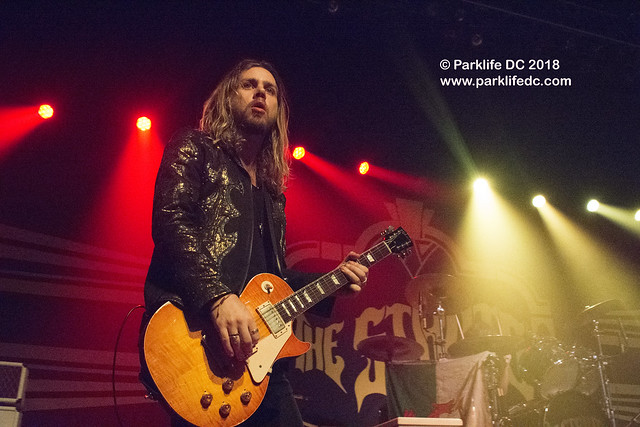 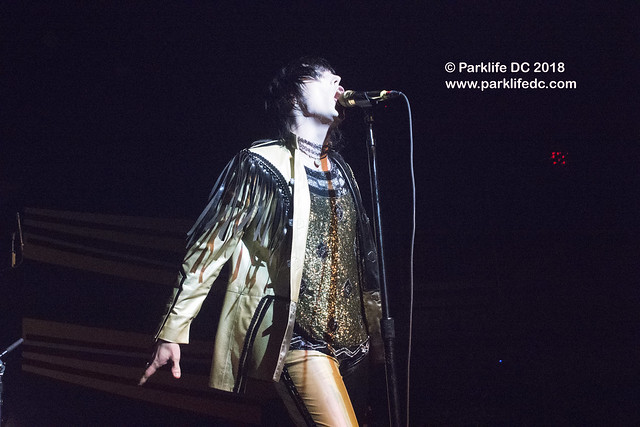 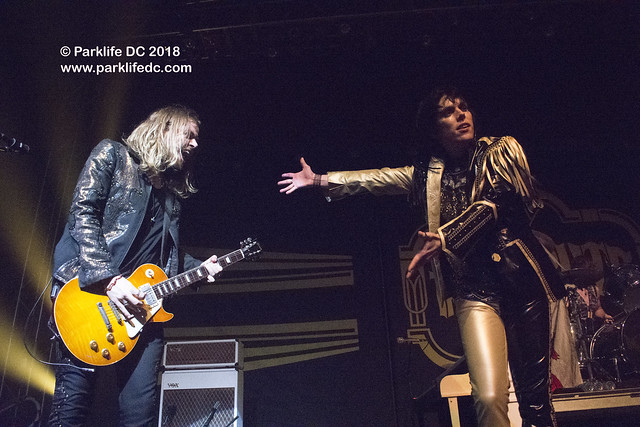 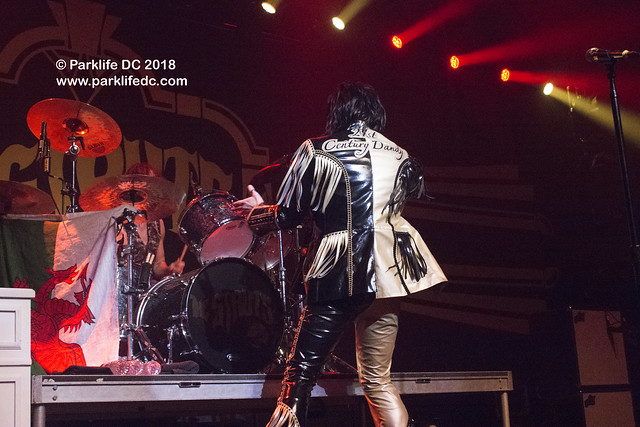 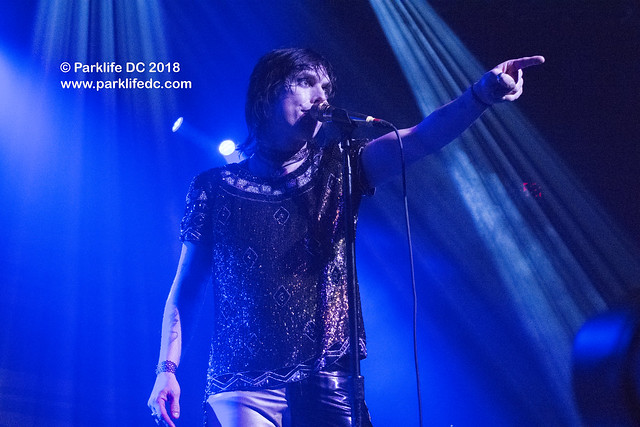 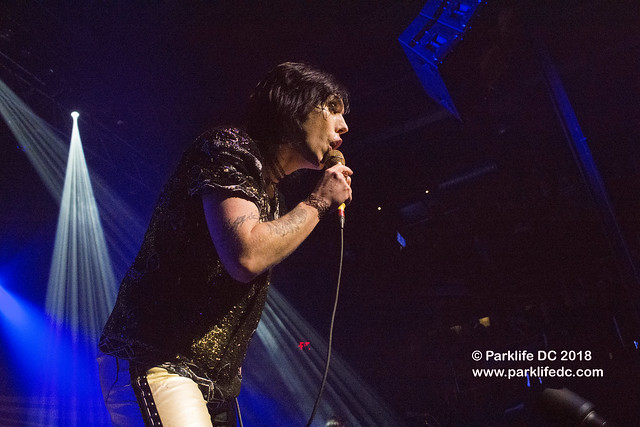 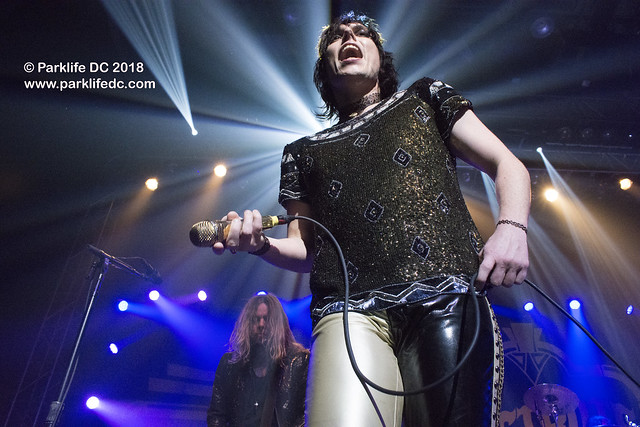 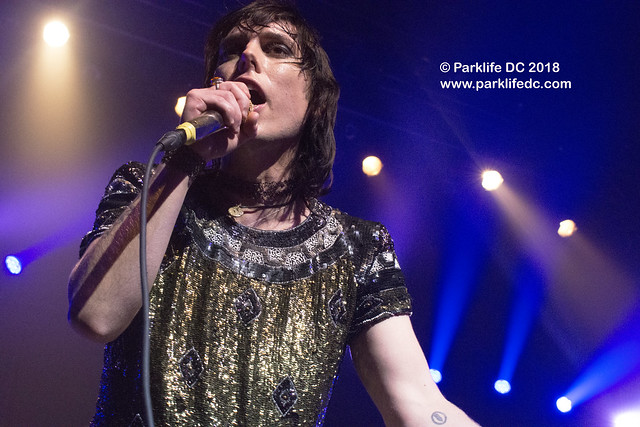 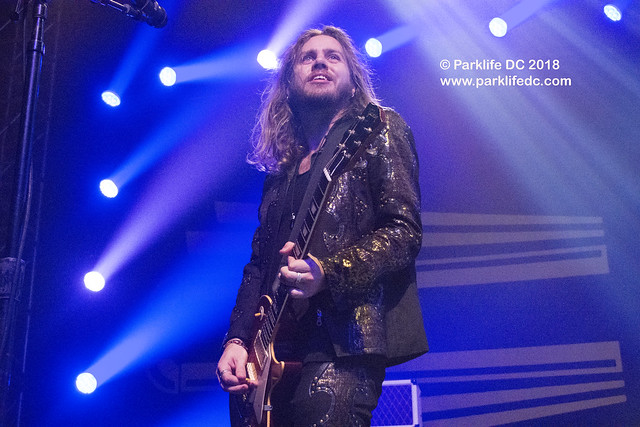 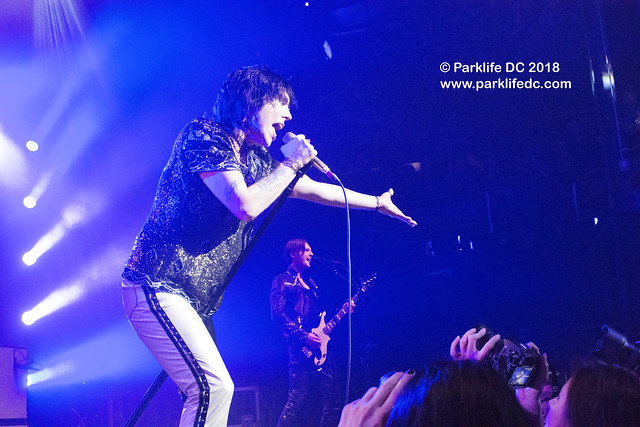