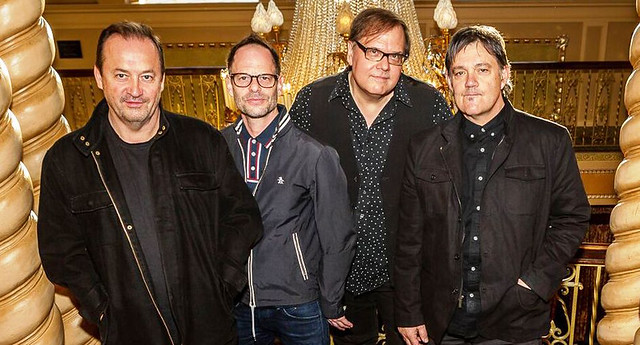 Power pop aficionados think of the ’70s and ’80s as the genre’s heyday — an era that included performers like Nick Lowe and Dave Edmunds, years that saw the emergence of bands like Big Star and Cheap Trick, and a time that culminated with the Gin Blossoms and Matthew Sweet.

For many music lovers (myself included), The Smithereens captured all the salient characteristics of a classic power pop band: the jangly ringing Byrds-like guitars, the Beach Boys’ high harmonies, the Beatles melodic lyricism… and perhaps the crunching heaviness of Black Sabbath? But The Smithereens added an East-Coast, Jersey Shore roots-rock sensibility.

Mark Caicedo of Parklife DC recently chatted with Jim Babjak, guitarist of The Smithereens, in anticipation of the band’s show at the State Theatre in Falls Church, Virginia, on Jan. 18.

Jim discussed the early influence of power pop, including The Beatles, Buddy Holly and, as Jim says, The Who. Jim and Smithereens drummer Dennis Diken met in high school in the early 1970s and began playing music together in and around Carteret, New Jersey. Bassist Mike Mesaros and Jim were longtime friends, taking accordion lessons together as kids, so the band recruited him. By the time the three met guitarist and singer Pat DiNizio from neighboring Scotch Plains in 1980, The Smithereens’ core already existed.

For the next few years, the band played locally around New Jersey and New York, writing songs, honing their chops, and building a following. Jim recalled, “Dennis had a notebook with about a hundred possible band names. We liked the Yosemite Sam catchphrase, ‘Varmint, I’m a-gonna blow you to smithereens.’ It just sounded like a band name.”

By 1986, The Smithereens had a record deal with Enigma/Capitol. The band’s debut album that year, Especially for You, spawned three singles, “Blood and Roses,” “In a Lonely Place,” and “Behind the Wall of Sleep,” forever putting them on the modern rock map.

Watch the official music video for “Behind the Wall of Sleep” by The Smithereens on YouTube:

With its jangly Rickenbacker guitars, an uptempo, immediately identifiable melody and a killer guitar solo, “Behind the Wall of Sleep” signaled that this was a band with which to be reckoned.

Jim said that listening to AM radio in the ’60s and ’70s influenced The Smithereens in ways that came out in their music. He remembered watching Del Shannon (during an ’80s “comeback” show) play an A chord and the unique way that particular move made its way into at least a half dozen Smithereens songs. “I learned to play guitar by ear… never learned the pentatonic scale. All that matters is that the song sounds good. If you listen to the solo on “A Girl Like You” [from third Smithereens album 11], you can hear how I picked up influences from the second side of Abbey Road.”

The band’s remarkable run now stretches to 39 years: 12 studio albums, four live albums, six compilation albums, and countless soundtracks and collaborations — Not to mention hundreds of thousands (if not millions) of road miles.

After frontman Pat DiNizio died in December 2017 following a decline in his health that began in 2015, the three remaining founding members made some decisions about the band’s future. Jim said, “We love playing, and I remember Pat saying to me at one point, ‘Jim, you were put on this earth to play guitar for The Smithereens.’”

There were also economic realities. Jim continued, “We’ve never stopped touring, but we can’t really do it like before. Now we’re a weekend band. We were never big, like say, Tom Petty, so the royalties aren’t coming in like before. But we didn’t want to just replace Pat but rather invite friends (and great singers) as guest vocalists, and who know how to capture the essence of the songs. Marshall Crenshaw joined us last year, and he didn’t need a lyric sheet, he already knew all the words!”

In 2019, The Smithereens have asked Robin Wilson of the Gin Blossoms, who was working as a record store clerk in Tempe, Arizona, when Jim met him in 1988, to join them on tour. Jim also hinted that this year could bring other notable lead singer surprises (he mentioned Ted Leo and Susan Cowsill!) as well as a new album.

Lou Reed said, “You can’t beat two guitars, bass, and drums.” There’s an infinite number of four-piece rock and roll bands out there, but no matter how many albums they sell or stadiums they fill, each one started out with the same thing. As Jim put it, “It’s about passion, our legacy, and as long as people keep showing up, we still wanna play.” Pat DiNizio, Jim Babjak, Dennis Diken, and Mike Mesaros embarked on a journey that’s not yet complete.

“Guitar playing is therapeutic,” Jim said. And the last few years have been tough for him. He lost his wife Betty in 2016 to pancreatic cancer, and then Pat soon afterward, making Jim’s connection to music, and an audience, even more important. Jim started a scholarship fund at Rutgers University, the Betty Babjak Memorial Fund, to honor the Babjak family connection to Rutgers and support students who had lost a parent to pancreatic cancer to attend the university.

Loss and music — shared experience and connection — can bring out powerful emotions. Who ever thought a little three-minute song could help us deal with those feelings?