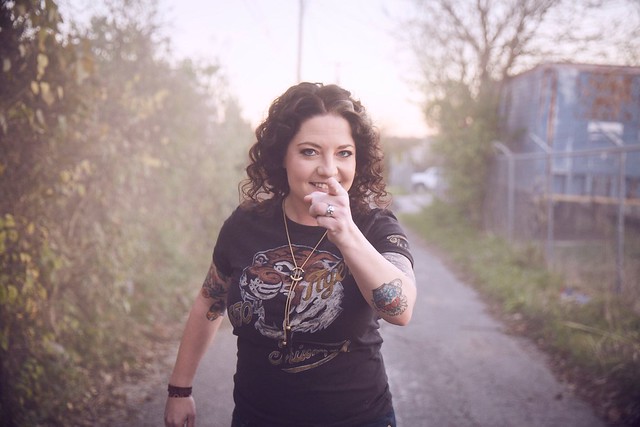 At Grammy nominee Ashley McBryde’s concert, you are seeing a star, but a star who connects with her audience in an intimate, authentic way. Ashley made that connection at The Hamilton Live on Wednesday.

The audience cheered for “Radioland” and sang along to “American Scandal” and “A Little Dive Bar in Dahlonega,” knowing every word. After “Tired of Being Happy,” the crowd chanted “Ashley!” A fan called out, “I love you, Ashley!” Ashley quickly responded, “I love you, too.” She hugged a fan, after warning the audience, “If I run up to you and give you a hug, don’t be frightened. I’m just a hugger by nature.”

Ashley combined sweetness and spunk. Asked to perform at her high school reunion — she got a call asking if “she still did music and stuff” and figured “I might as well get paid” — and write a song for her graduating class, she took the opportunity for revenge, composing “You Got Fat, I Got Famous.” In the song Ashley described how she was a frizzy-haired band geek in high school, a social outcast. “Karma and gravity,” Ashley said, “are the same thing.” “I did leave out the part, where I was 35 before any of that happened,” she admitted.

In high school, Ashley got kicked out of an algebra class. The teacher asked all the students to say what they were going to do when they grew up. “I still don’t know what that means,” Ashley quipped. Ashley told the class she was going to be a singer and have songs on the radio. The teacher told here that she needed to have another plan, that this could never happen because she was from Arkansas – just like Johnny Cash and Conway Twitty — and that sort of thing doesn’t happen to girls from Arkansas. This incident eventually inspired the title track of her Grammy-nominated album, Girl Going Nowhere.

Ashley’s parents molded her into the strong, kind, and talented woman she is. During her solo acoustic set, which was unplanned and responsive to audience requests, she played “Bible and a .44,” about her late father. She told the audience about her father’s treasured guitar, which he never let her touch and how, on a day he wasn’t home, she drove to his house and played that guitar, “because I’m a grown woman.” When Ashley holds her father’s guitar, she holds “more than strings and wood.”

Ashley’s mother, a good Southern woman, disapproved of the language in “Luckiest SOB” She asked Ashley if it couldn’t just be “son of a gun.” Ashley tried playing it for her with the lyrics change, and her mother said, “No, no, it was better the other way.” The song “Rattlesnake,” she said, “ain’t about Mama, but it is about how I know how strong she is.”

Talking about “American Scandal,” Ashley said, “I couldn’t write love songs for the longest time. Not because I don’t like love and it doesn’t like me, but because I didn’t realize that what I’m in love with is this: getting up here and singing songs.”

There was a realness to Ashley. A very attractive woman, she doesn’t fit the model-like mold of the country/pop star. She isn’t impossibly tall and a size zero to two. She described one of her band members as the only person she knew with more tattoos than her. Ashley looked like a real person you might know or meet, not some industry creation. That realness plays into her authenticity, adding to her appeal.

For many years, Ashley “made a living working in dive bars,” playing for tips. Those long, lean years served her well though; she spent them studying the greats and perfecting her stagecraft. In her concert, she name-checked great songwriters Townes Van Zandt and Guy Clark, who have influenced not only her songwriting but her performance style. In the style of Clark, Ashley effortlessly works in spoken asides in her songs, adding a further dimension of storytelling.

Ashley put on an absolutely terrific concert. This lady can absolutely sing. Ashley’s songwriting is first-rate, too. She is part of a wave in country music that sees the best work being done by female artists. Three of the five Best Album Grammy nominations went to women this year, and there’s a case to be made that it should’ve been even more. The future of country music looks mighty female, and Ashley McBryde promises to be a big part of it.