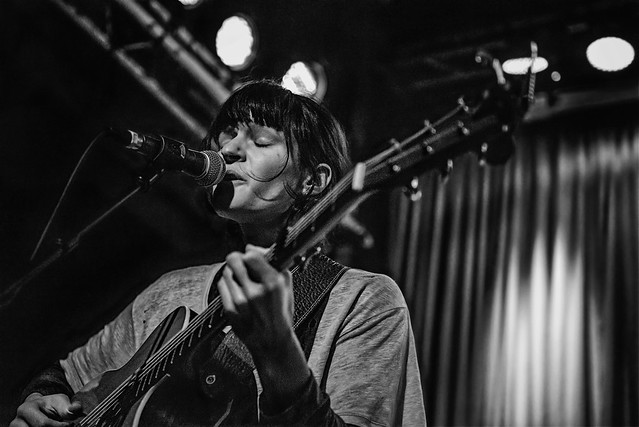 Adrianne Lenker, front person for the band Big Thief, creates the kind of music that is both beautiful and heart breaking.  It’s also easy to lose yourself in the stories she tells. And tell them she did at Metro Gallery in Baltimore recently.

After two critically acclaimed albums with Big Thief (and before that a couple of releases both solo – Hours Were the Birds – and together with Big Thief bandmate Buck Meek in 2014) Adrianne released a new solo album, abysskiss, back in October.  Filled with intricately arranged and finger picked acoustic pieces, the record unfolds like a book of poetry. The one thing that may be different between Big Thief and the new solo album may be in the delivery.

Personally, it reminds me at the same time of both Tiny Ruins / Holly Fullbrook and Nick Drake and Bill Callahan but also like none of those. It’s like a quiet dance and sometimes like listening to a secret. It seems fragile at first glance but you know it’s powerful. And each time I listen to it I can hear something different — both musically and lyrically.

Shortly after the release of the new record, Adrianne announced a tour with Luke Temple, a folk musician based in New York. I’ve seen Big Thief several times in the past but hadn’t seen Adrianne perform solo before. On Feb. 16 at the Metro Gallery in Baltimore to a sold out (and very respectfully enthusiastic) crowd, I witnessed one of the most beautiful performances in recent memory.

Beginning with “Masterpiece” from Big Thief’s debut album of the same name, Adrianne played a few songs (including “Angels” from Adrianne Lenker and Buck Meek’s 2014 LP, a new song “Cut My Hair” and “Hours Were the Birds”) before being joined on stage by Luke.

As Adrianne intricately finger picked chords to “terminal paradise” from abysskiss, Luke created washes of guitar and accompanying fingerpicked lines from his electric guitar. And the audience was kept in awe throughout the performance. Even prompting Luke and Adrianne both saying “You’re a good crowd.” “No, you’re a great crowd.” Over the next hour, Adrianne and Luke played a number of the songs from the new album, such as “symbol,” “from,” and “womb.”

And there was some levity too as Adrianne and Luke joked back and forth. “What’s on the dock, Lenker?” “Docket?” “What just crawled up onto dock?” “What did.” Like the Abbott and Costello “Who’s on first” bit.

Watching this performance, I couldn’t help but think how timeless these songs really are. Even those new songs, and I’m thinking of “out of your mind” here, really could have been written decades ago. A testament to the incredible songcraft and artistry of Adrianne Lenker.

Adrianne finished her set again solo with “Nothing” and “Mary” (one of my all time favorite songs ever) by Big Thief. Adrianne continues her tour through the end of February. Find dates here.

Here are some photos of Adrienne Lenker performing at the Metro Gallery in Baltimore on Feb. 16, 2019. All images copyright and courtesy of David LaMason.