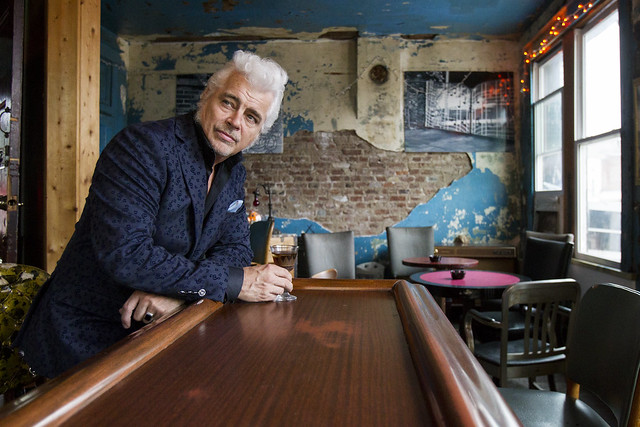 Taking the stage first with his acoustic guitar on March 14, Dale opened with “Things I Shouldn’t Do,” off his new record, Call Me Lucky. The man in black explained that he’s “not used to doing this acoustic thing.” The retro singer-songwriter with a white pompadour went on to say, “I don’t go by setlist… if you came to hear something, holler it out.”

Dale interacts with and aims to please his audience. After his opening number, he sang “Happy Birthday” in his deep, Johnny Cash-like bass voice to someone named Debbie. Fans sent him several drinks during his set, to which he joked, “I don’t drink normally,” meaning that his drinking isn’t normal. Dale is known for his drinking songs, playing “I Lie When I Drink” Thursday evening.

For his second number, Dale played the title track of his new record. Introducing “My Baby Makes Me Gravy,” Dale said that, in addition to drinking, “I also like to eat.” Deadpanning, he told the audience, the next song was called “Mama’s Smile. I wrote this about my mama’s smile.”

Stream Call Me Lucky by Dale Watson on Spotify:

“The stories I have,” Dale said, “are about as long as the songs.” “I can’t get in trouble tonight,” he added, “I’m with Kinky,” who is notorious for his bad-boy persona.

Soon, Dale played his most colorful song, “Exit 109,” which was about a whorehouse on the interstate on the way to Vegas. As he was driving one day, a sultry voice on Dale’s CB radio purred, “Break one-nine, anyone want a date?” While he didn’t get a date that day, Dale did get a song out of it. He also shared that actual number was 129 but that “sang too hard.”

Dale took a request for “Louie’s Lee’s Liquor Lounge,” about a bar in Minneapolis. Then he joked, “If I don’t sell a million records tonight, my label is going to strangle Kinky Friedman.” He earlier had joked that his label was making him play songs from his new album, looking over his shoulder, as though the label were hovering about backstage.

Playing “Heaven’s Going to Have a Honky Tonk” allowed Dale to emphasize his love of Lone Star beer, proclaiming “Lone is the only kind of beer served in heaven.” Throughout his set, Dale repeated a gag, playing Lone Star, mugging, and making increasingly ridiculous claims about the beverage, such as “the only beer that your whitens your teeth and has no calories.”

For several songs, Dale brought out his romantic and singing partner, Celine Lee, to join him on duets. They sang “Heartache Either Way,” “How Can I Trust You?” “We Can Work This Out” (the Carl Perkins-written, Johnny Cash-June Carter song), “That How I Miss You,” and “I’m Gonna Wear the Pants.”

Dale finished his set with a trilogy of songs expressing his dissatisfaction his the country establishment. Dale doesn’t call his music country. He calls his music, a blend of honky tonk, Western Swing, rockabilly, and outlaw, “Ameripolitan” music.

In the first song, “Nashville Rash,” Dale sang about being “too country for country, like Johnny Cash,” referencing the fact that Johnny was dropped from his record deal in the ’90s (before being picked up for his work with Rick Rubin on the American Recordings series). Nashville hated this song.

Later, Dale released “A Real Country Song,” which finds him begging for that classic sound. He offered the advice to the men in the audience that if you ever have to beg, let your voice break on “please.” A rumor that Dale read in a magazine inspired the final song: Supposedly, someone overheard the phrase, “That’s country, my ass!” exchanged between Merle Haggard and Waylon Jennings at the Country Music Association Awards. Dale ran with it, writing, “Country, My Ass!”

Kinky Friedman opened with a Woody Guthrie song, “Pretty Boy Floyd.” The last line of the song famously goes, “You won’t never see an outlaw drive a family from their home.” Beneath the jokes and the persona, a lot of Kinky’s music is a very folk-tinged and sensitive brand of country. The soft, gentle delivery of his singing contrasted with the boisterous man who made numerous appearances on the Don Imus show.

And the jokes came quickly. “I’m 74, but read on the 76-year-old level.” “Europeans love me, I’m the new David Hasselhoff.” “Germans are my second favorite people; the first is everyone else.” Kinky fearlessly, and some would argue tastelessly, goes head-on at taboos surrounding the Holocaust.

Kinky sang “Jesus in Pajamas” from last year’s Circus of Life, his first record of new material in 40 years. Around 3am one morning, Willie Nelson called him, and caught him watching Matlock. Willie told him this was a sure sign of depression and insisted that Kinky write songs. With Willie’s encouragement, Kinky wrote a dozen songs over a month.

After bursting the creating dam with Circus of Life, Kinky has found his muse again, and he has a new record coming out this summer. Larry Campbell, whose show I covered in September, produced the album. Kinky called Larry, who has worked Dylan with and the late Levon Helm, “a fucking genius.”

After Kinky sang “Zooey,” Dale brought him a drank. He said that Kinky is “my favorite Jew.” Later, Dale said to Kinky, “You’re the first Jew I knew.” (Speaking from experience, this situation creates a lot of pressure; whatever impression you create will color that person’s future perceptions and interactions of Jews.) “Zoey” hailed from Kinky’s latest album, Circus of Life, released in 2018.

Stream Circus of Life by Kinky Friedman on Spotify:

Kinky played another cover, Johnny Cash’s “Ballad of Ira Hayes,” about the native American marine who became a hero in WWII and his tragic death. He followed up with “A Dog Named Freedom,” about a three-legged dog, from Circus of Life. Kinky spoke about his love for dogs, telling the audience he has six. He absolutely wrecked with me a song about one of his dogs that ran away to die, “Goodbye Mr. P,” which will appear on the next album.

For the last song of his set, Dale came out to join Kinky, as did an old bandmate, DC resident Jimmy “Ratso” Silman. Together, they sang Kinky’s best-known song, “Asshole from El Paso.” If you’ve never heard the song, think Randy Newman’s “Good Old Boys” but country and more vulgar.

Receiving a round of applause, the three men cleared the stage. Kinky came back to perform his encore solo, singing a new song, “I Love You When You It Rains.” After the show, Kinky and Dale met with fans to sign merch and take photos. In true Kinky fashion, he lit up his cigar, blatantly violating the no smoking policy. But who’s going to tell Kinky to put out his cigar?