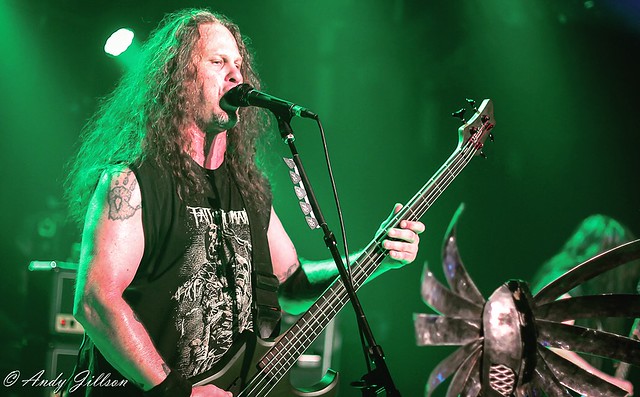 Legendary death metal pioneers Morbid Angel came to an to an ear-piercing grinding halt in Maryland at Baltimore Soundstage recently. The 2019 Decibel Magazine Tour made a stop at Soundstage to the horror and delight of rabid metal fans.

Since its launch in 2012, the Decibel Magazine Tour has undoubtedly unified musicians from across the wide landscape of extreme metal music. On this leg of the tour, I was fortunate enough to catch the highly influential Morbid Angel playing alongside Colorado’s Blood Incantation, Bay Area Necrot, and New York’s Immolation.

Morbid Angel was formed in Tampa, Florida, in 1983 by guitarist Trey Azagthoth (the only original member left in the band), vocalist and bassist Dallas Ward, and drummer Mike Browning. Morbid Angel are widely considered to be one of the best and most influence thrash/death metal bands. After witnessing their intense performance at Baltimore Soundstage on Sunday, March 10, I can clearly see why they still carry on to this day carrying the torch as one of the best in the world at their craft.

The fans were full of primal energy and thrashed and headbanged themselves into oblivion during Morbid Angel’s entire set. As usual, I was allowed to photograph the band in the photo pit for their first three songs. My time in the photo pit sped by almost as fast as the band played. They ripped through three songs like a child on Christmas morning ripping open long-awaited presents. I was basically in a death metal blackout for about 8-10 minutes.

Morbid Angel are playing shows on this tour in support of their ninth and most recent studio album, Kingdoms Disdained. It’s their first record since 2003’s Heretic to feature vocalist/bassist Steve Tucker, and it is the introduction of drummer Scott Fuller (formerly of Annihilated). Morbid Angel’s current lineup consists of Trey (guitars/keyboards), Steve (vocals/bass), Scott (drums), and Dan Vadim Von (guitars).

This tour won’t last much longer. Best get your shit together and see Morbid Angel for yourself. Here are some photos of Morbid Angel’s performance at Baltimore Soundstage on March 10, 2019. All images copyright and courtesy of Andy Jillson.