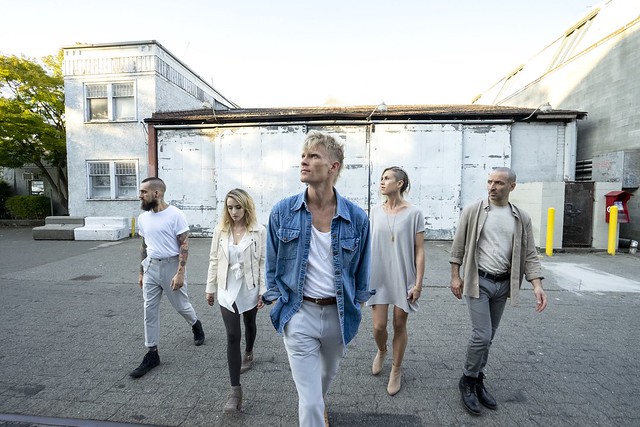 Combine Grouplove and The Pixies and you might get an idea of what Canadian indie rock band Mother Mother sounds like. Fans recently packed into a sold-out Rock and Roll Hotel to enjoy the band’s melodic and energetic music.

I was a bit surprised to see the show had sold out. I had never heard of Mother Mother until recently, and I didn’t realize they had such a following. Then I looked at Spotify and noticed they have about half a million monthly listeners. There was a line down the street waiting for the doors to open — Mother Mother wasn’t going on until after 9pm. The amount of fans they have is a testament to the quality of their music is and also how relatable it is on an emotional level.

The song “It’s Alright” off of their 2018 album Dance and Cry is a gentle song that anyone who has made mistakes and bad decisions can relate to. “So Down” is an encouraging acoustic tune that proudly boasts of feeling down, embracing it, and pushing forward. I love when artists mix sadness and positivity into a song. “So Down” does it in the most beautiful way.

Listen to Dance and Cry by Mother Mother on Spotify:

Lead singer and guitarist Ryan Guldemond was clearly the frontman but his sister Molly and keyboardist Jasmin Parkin also showcased their talents throughout the evening of March 13. Molly took the lead on the bands cover of the Radiohead classic “Creep,” which was clearly well-received by the crowd. Ryan also talked about how they seem to come to DC every two years. I kept waiting for him to ask the audience or mention coming more often, but he wouldn’t bite. Hopefully, the turnout Wednesday night will encourage the band to start coming to the DMV more.

The sound of Mother Mother translated perfectly in the live performance. Big Kudos to the Rock and Roll Hotel, which has some of the best acoustics I have experienced in a venue. Most of the of credit of course has to go to the band. There was no guarantee that they would sound as good as they do on the studio albums. I’ve seen plenty of bands that did not sound as good live as in the studio. Mother mother did not disappoint in that aspect — or any other for that matter.

My hope is that Mother Mother will continue to put out exactly the kind of music they’ve put out over their seven-album career. As soon as I began listening to them I was intrigued and I’ve found their music not only enjoyable audibly, but emotionally as well. What more can you ask for?