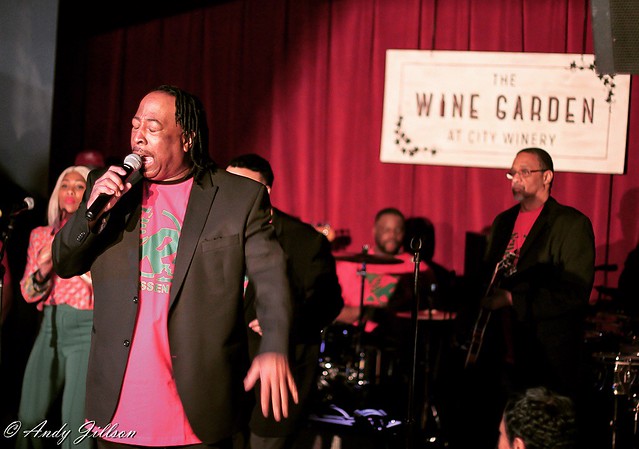 City Winery seemed like a long way from where this night might have gone down in 1976. But Rare Essence have been bringing their go-go sound to audiences around the DC area for 43 years now, and they brought it again at the winery recently.

In 43 years’ time, Rare Essence proven to have remarkable staying power and have built a diverse fan base that spans multiple generations. That was evident when surveying the audience that packed DC’s beautiful City Winery on March 17.

Clad in their trademark matching red t-shirts emblazoned with the Rare Essence logo, the band, running 15 members deep, packed the stage that was clearly built with a much smaller act in mind. But that didn’t faze the night’s funk one bit.

“Does everybody feel like DC’s grooving tonight?” asked the band’s front man, James “Jas.Funk” Thomas. Jas.Funk doesn’t sing or rap so much as he leads the crowd in enthusiastic chants and refrains over the top of the rest of the bands loose, bongo-inflected grooves. And for the set’s opening song, Jas.Funk directed the crowd in a go-go-ified version of a happy birthday wish that was a far cry from the typical version of the traditional song we’ve all come to know.

Not much longer after that, Jas.Funk was in the crowd, putting the mic in the faces of fans, encouraging them to participate in the creation of the music, and bopping along with them.

Stream Turn It Up by Rare Essence on Spotify:

Jas.Funk has much love for at least half of the crowd. After declaring that the ladies in attendance “have pro jobs, their own money, and their own place,” he encouraged them to “take the bobby pins out and kick the heels off.” Had they not already done that, ladies and men and all others alike were feeling the rhythm, and there was no turning back.

The guitar work is held down by one of Rare Essence’s founding members, Andre “Whiteboy” Johnson, who takes an unassuming, yet dominate, position on the stage. Officially, the rest of the band consists of Charles “Corleone” Garris and Calvin “Killa Cal” Henry on vocals, Roy “RB” Battle on keys, Quentin “Shorty Dud” Ivey on percussion, Samuel “Smoke” Dews on congas, Kenny “Kwick” Gross on drums, and Michael Baker on bass (surely his nickname will come soon enough).

These nine members were backed by an additional six that remain yet unidentified on the band’s website, including a young woman who at one point, took lead vocals and captivated the crowd while Jas.Funk moved to the back of the stage to groove with the rest of the band.

Rare Essence are anything but strangers to the local music scene in the DMV. Find their next show on the band’s website.  It is something no music fan will regret.

Here are some pictures of Rare Essence performing in DC at City Winery. All images copyright and courtesy of Andy Jillson.