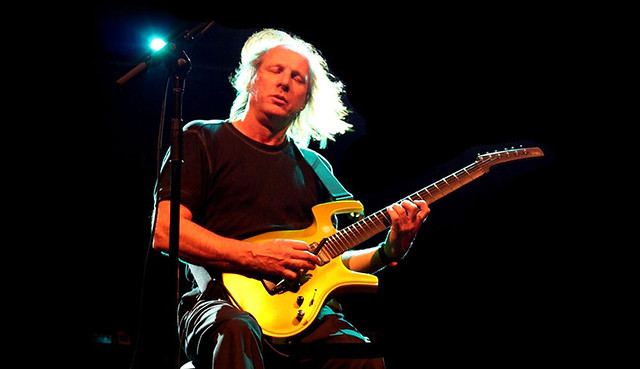 If you like really good music, you probably already know Adrian Belew. But if somehow you didn’t, I would tell you that not only did he perform with the likes of David Bowie, Frank Zappa, and the Talking Heads, but he distinguished himself mightily while doing so. The affable talent released a new solo album, Pop Sided, recently, and he performs at City Winery on Wednesday, April 10.

In support of Pop Sided, Adrian hit the road with a band consisting of drummer Jordan Perlson; guitarist, keyboardist and vocalist Saul Zonana; and bassist Julie Slick. Describing the shows, Adrian said his City Winery performance would be “a more complete picture of most things I’ve done. More songs, new songs from the award-winning Flux app, King Crimson material I haven’t played for years, and a dose of classic Power Trio.”

“It’s my intention to make this the best Adrian Belew show ever!” he added.

Adrian recently told The Times that the quartet will allow him to be more experimental than the Adrian Belew Power Trio, especially when it comes to performing material from King Crimson, the supergroup he fronted for 30 years.

“It’s a broader scope,” Adrian said. “We now can play more of my catalog from Crimson and my solo material and other things. When I was touring in a power trio, there was a certain amount of material you couldn’t play in the form it was written. I also can now play some of my piano songs. We do a couple of those. Plus a few songs from my brand-new album Pop Sided. It’s only available at shows, so it’s a soft release.”